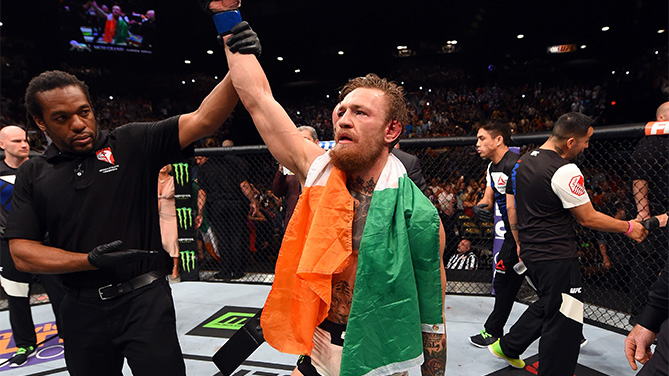 Even in his finest hour, Conor McGregor couldn’t escape the specter of Jose Aldo.

It hung over him all last week and late Saturday night after he captured the UFC’s interim featherweight title with a second-round knockout of Chad Mendes.

And it isn’t going away, at least not until he and Aldo finally meet, probably in Las Vegas, to determine the division’s singular champion.

Exactly when is not yet determined since Aldo is recovering from a rib injury that forced him to pull out of UFC 189. But when it happens, UFC president Dana White said he expects a McGregor-Aldo fight to break the records set Saturday at the MGM Grand Garden Arena: an attendance mark of 16,019, a live gate of almost $7.2 million and probably one million pay-per-view buys. 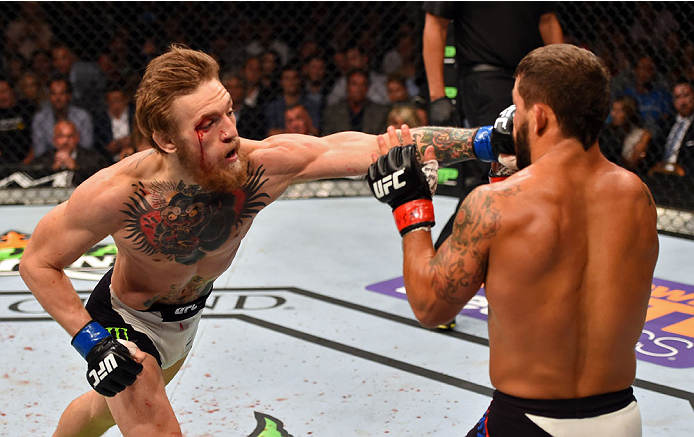 At this point, a stadium venue, which McGregor desperately wants, won’t happen for an Aldo bout.

“It’s all about the right fight, the right place, the right time,” White said. “The problem is, it’s really hard to leave Las Vegas. This place is the fight capital of the world for a reason. If you’re a fight fan, everything is right here in the hotel. You can do everything in the same building and go to the event.”

White had told McGregor that if he beat Aldo, he would probably defend his title at 82,000-seat Croke Park in Dublin. But Aldo’s withdrawal took away that possibility.

“When he and Aldo fight, it will be here in Las Vegas – as of right now,” White said.

In the meantime, McGregor was signed to be one of the coaches on the upcoming season of The Ultimate Fighter, which will debut Sept. 9 on FOX Sports 1. Urijah Faber will also coach. 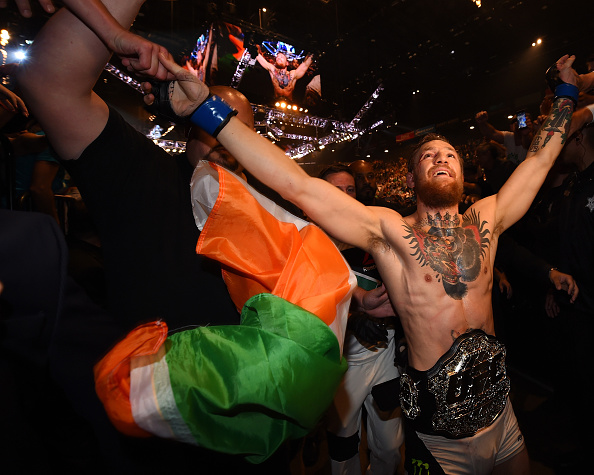 McGregor is not the sort to take much time off between fights, although he will need time to allow the gash above his right eye (the result of a Mendes elbow) to heal. In Saturday’s post-fight press conference, he appeared physically and mentally exhausted, and for good reason.

It wasn’t just the fight. He dove headfirst into the event’s promotion, which began months ago, and spoke afterward about the effort he put into selling the fight.

After defeating Mendes, who had controlled most of the bout, McGregor broke into tears – for himself, for his country and for the relief he must have felt that it was finally over.

“It overwhelmed me and I came to tears,” he said. “It has been a hell of a ride. Just over two years I’m here. I’ve already broken every single record in the game. It does not come easy. Trust me when I tell you there’s a lot of work involved. It’s not just about showing up at the gym.”

As for returning to Dublin to fight in a big venue, McGregor still hopes to make it happen. But for his fight with Aldo, he’s already got his sights set on the new arena being built behind the New York New York Hotel and Casino.

“We could do a stadium, no problem, but we will see,” he said. “I’ve heard about the new Vegas arena that’s opening up. When I make my way to the gym, I see this new arena that is a 20,000-plus seater. It looks like a phenomenal arena. I’m open.

“But the stadium show in Dublin will happen, make no mistake about that.”