UFC 196 headliners Conor McGregor and Nate Diaz sat feet away from each other with little incident when announcing their Saturday bout on Feb. 24. Yet Thursday at the David Copperfield Theater at MGM Grand, that (fairly) civil tone disappeared, with the two getting into a brief scuffle as they faced off following the event’s final press conference.

The incident was quickly defused by UFC President Dana White, his staff and security, but not before McGregor’s SBG Ireland squad and Diaz’ Skrap Pack rushed the stage, much to the delight of the fans that packed the theater.

It was surprising that the two took this long to get physical before fight night, but as the presser progressed, the barbs from McGregor were clearly taking a toll on the demeanor of Diaz, who made it clear that this wasn’t just a one-on-one fight, but one that matched Northern California’s finest against the Dublin standouts.

“Where’s your credentials at,” asked Diaz. “You knocked out midgets. The JV squad on my team can beat your team.”

Already an intriguing matchup given the style and attitude employed by both men, the UFC 196 main event has an added layer of interest thanks to the bout being fought at 170 pounds, two weight classes above the one where the Dubliner is champion. But the featherweight boss has been fearless throughout his career, and this instance is no different.

“There’s a lot of people that play it safe in the game,” he said. “They don’t take the risks. I take risks all the time.”

But has he bit off more than he can chew with Stockton’s Diaz, who went 2-2 at welterweight before dropping back to the lightweight division, where he most recently defeated Michael Johnson in December.

“I felt faster, better, stronger there,” Diaz said of life at 170 pounds, but other than some expletive-laced retorts at his opponent, the 30-year-old let McGregor do the talking, something “The Notorious” one has never needed any prodding for.

And while the topics ranged from his respect for boxing legend Muhammad Ali (“He was a special man, he changed culture”) and the Floyd Mayweather poster on the side of the MGM Grand (“I might go and rip it down myself”) to his dream opponent (“I’d love to fight myself. Imagine the numbers that would do?”), he saved his most vicious barbs for Diaz, hoping that he makes it out of the first round this Saturday.

“Dance for me, Nate,” McGregor jabbed, referring to Diaz’ payday this weekend and asking him for a thank you.

On Saturday they will. 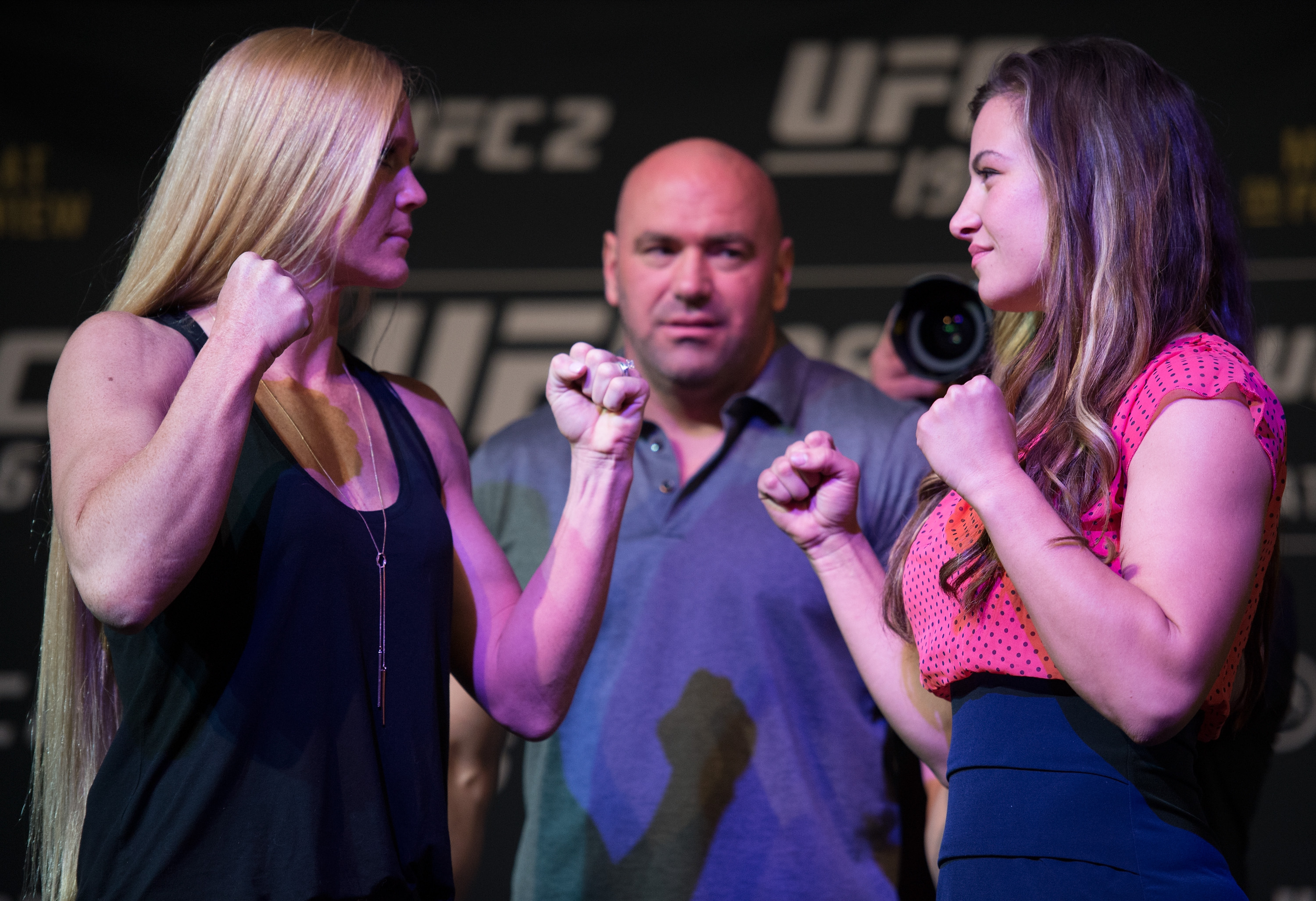 The combatants in the UFC 196 co-main event were on stage as well during Thursday’s press conference, but UFC women’s bantamweight champion Holly Holm and challenger Miesha Tate had far less fireworks than McGregor and Diaz, and that’s fine with Tate.

That’s pretty accurate. But don’t take the respect the two have each other for a lack of intensity, as both know what’s on the line. For Albuquerque’s Holm, it’s her first chance to defend her title and cement her place at the top of the 135-pound weight class. For Tate, the motivation is obvious – to win the title in her second shot at UFC gold. But it’s not pressure she’s feeling leading up to this weekend.

“I hate to use the word pressure,” she said. “I feel confident and there’s a lot of good energy going into this fight.”

Holm also dismisses the pressure that goes along with following up her stirring title-winning effort against Ronda Rousey last November, simply because she likes it.

“Every fight has a lot of pressure because I put it on myself,” Holm said. “But I don’t think about it too much. I just want to win.”

On that, the two ladies challenging for a world title at the MGM Grand Garden Arena this Saturday can agree.