McGregor Declares Himself 'New God Of Boxing' At Grand Arrivals 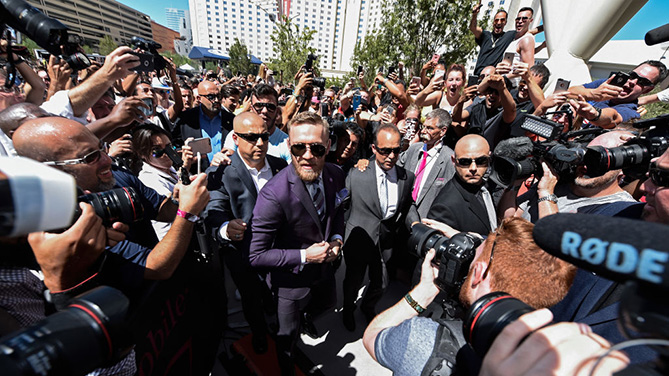 It’s only the beginning of Conor McGregor’s first fight week as a professional boxer and he’s already given himself a promotion before Saturday’s clash with Floyd Mayweather.

“Floyd can talk about whatever he wants to talk about,” the UFC lightweight champion said at Toshiba Plaza in Las Vegas during the grand arrivals of both competitors before their megafight at T-Mobile Arena. “He can talk any kind of trash he wants, because he’s talking to the new God of boxing.”

Pre-Order Mayweather vs. McGregor Digitally To Watch on Desktop, Mobile Or Select Streaming Devices | Get Tickets To May/Mac

Fight fans were out in force Tuesday, many of them coming in from out of town (and out of country) to cheer on Dublin’s finest.

“The Irish are rolling in and whenever we roll in, we take over,” McGregor said. “It was amazing to see all the Irish fans out today. It’s going to be a great spectacle.”

As for the 49-0 Mayweather, it was almost business as usual since “Money” is already accustomed to the biggest stages his sport can offer. And for him, the key is keeping calm in the eye of the hurricane.

“When there’s a fight of this magnitude, it’s all about keeping composure and that’s what I do,” the Las Vegas resident said. “I go out there and do my job and let the rest take care of itself. This is huge, the numbers that we’ve been hearing about, they’ve been crazy.”

Those crazy numbers and the amount of attention the fight has received isn’t surprising given the status of both fighters in their respective sports and the reality of McGregor making the leap from MMA to boxing in just a few days’ time. It’s a bout that has everyone talking, but on Saturday, the talk stops and it’s time to fight. And both Mayweather and McGregor are promising that it’s a fight that won’t require judges.

“If people are overlooking my size, power and youth, they shouldn’t be,” countered McGregor. “I’m very confident in those attributes. I believe I’ll knock him out early. If you look at the way I fight, I am a fast starter. I come out and bang people right away. With eight-ounce gloves, I don’t see him lasting more than one or two rounds.”