McGregor dared to be great - nothing wrong with that

In 1975, when the 41st round of combat between Muhammad Ali and Joe Frazier was done, capped off by their epic third bout, better known as the “Thrilla in Manila,” two of the greatest heavyweight boxers ever let their guard down after punishing each other physically and verbally for years.

"I always bring out the best in the men I fight, but Joe Frazier, I'll tell the world right now, brings out the best in me," Ali said. "I'm gonna tell ya, that's one helluva man, and God bless him."

"Man, I hit him with punches that'd bring down the walls of a city," Frazier countered. "Lawdy, Lawdy, he's a great champion."

That’s what sharing a ring or Octagon can do, whether it’s five rounds or five minutes, and that was the case Saturday night after Nate Diaz’ stirring second-round submission of Conor McGregor. Sure, their battle was no “Thrilla,” but it was a thriller in its own right, filled with twists and turns, blood and drama, and finally, a sudden and spectacular finish. And with the final verdict rendered, McGregor and Diaz, filled with all sorts of acrimony toward each other before fight night, shook hands and gave each other the respect only fighters know. 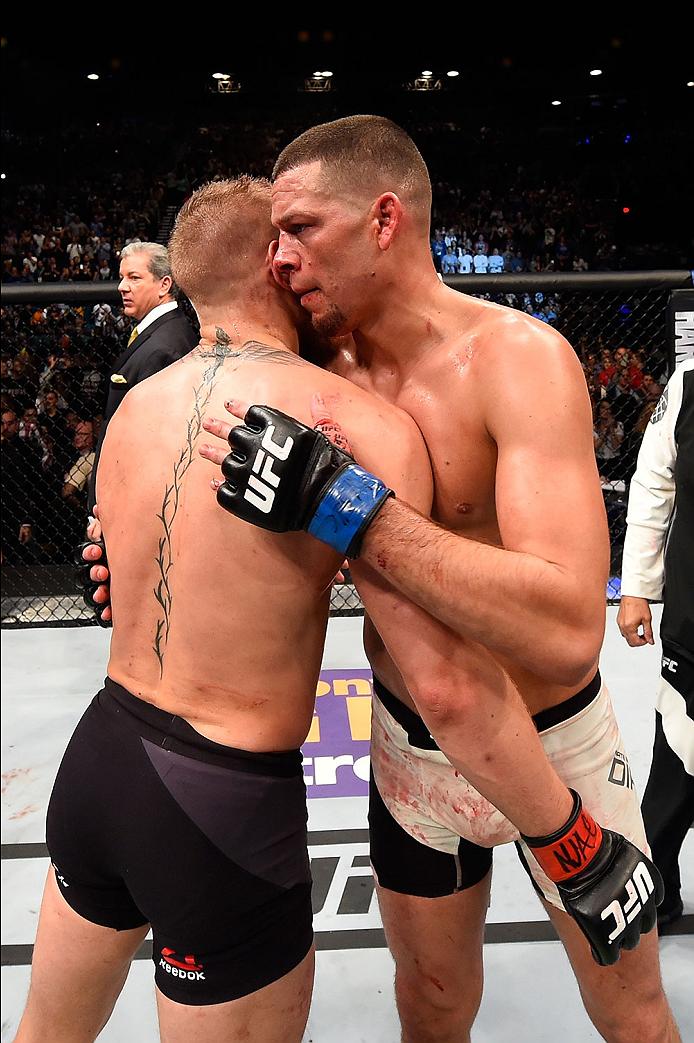 A day later, the buzz has only grown louder about the result, much of it about the apparent “fall” of the UFC featherweight champion from Ireland. But McGregor, who was making his welterweight debut, is not making excuses, not stealing anything away from the biggest win of his opponent’s career, his most telling statement being the simplest.

“I took a chance to move up in weight and it didn’t work.”

It didn’t, but oh, what a chance he took. In boxing, a move from 145 pounds to 170 pounds constitutes a jump of four weight classes. In the UFC, the leap is no less daunting, especially when it comes on less than two weeks’ notice against a seasoned veteran who competed on the highest level of the sport four times previously.

Nate Diaz was no joke, and he proved it once more, as the punches that felled featherweights bloodied and bruised him, but refused to dent his chin. And once the punches of a welterweight began to break McGregor’s defense, the 27-year-old was in a place he had never been in since joining the UFC roster in 2013.

Yet that was the beauty of the fight and of McGregor’s willingness to dare to be great. Long seen by many as a character, created by the media and the Irish fans who will follow him anywhere, there is no disputing what he put on the line last Saturday when he didn’t have to. He could have easily decided to sit out once Dos Anjos was injured and wait for a spot on July’s UFC 200 card. He could have chosen, months earlier, to remain at 145 pounds. It’s not fair to say that was playing it safe, but it is accurate to say that with his attempt to move up to welterweight, he was doing what few would expect a “media creation” to do.

But it’s what fighters do, and while McGregor is more than adept at talking the talk, when it comes to taking risks in the fight game, he doesn’t see what others see. In fact, he doesn’t even consider risk, something confirmed by his friend and main training partner Artem Lobov.

“He is just a fighter,” Lobov said last week. “He is a true martial artist, and martial arts isn't about weight classes. If anything, it's about a smaller guy being able to beat the larger opponent. This is how martial arts was invented. So his attitude is f**k the weight classes, forget all that. Just get in there and fight. Do what you're trained to do.”

McGregor did that Saturday night. He dared. He fought. He lost. Many have celebrated. Many have called him a hype job. He’s not. He’s human. And like Ali after losing to Frazier in their first fight in 1971, he may end up being even more popular before.

Why? Because perfection is boring.