McGregor and Aldo put on show at UFC 194 Open Workouts

Conor McGregor had a spring in his step Thursday at the MGM Grand Garden Arena as he went through a brisk workout for the media and a legion of fans that all seemed to be there to watch the Irishman two days before his UFC 194 main event against Jose Aldo. 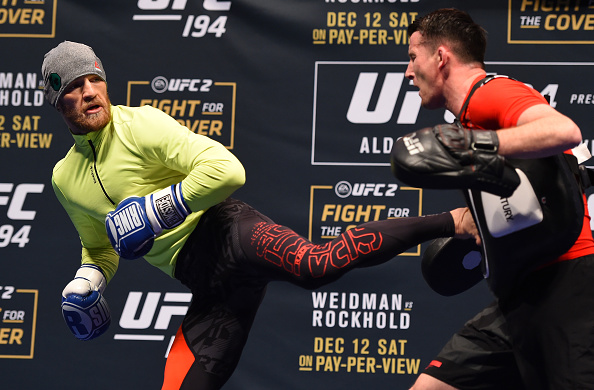 That loose attitude, which came complete with smiles and plenty of waves and salutes to the crowd, is a clear 180 degree turn from UFC 189 in July, when a knee injury forced a rough weight cut leading into what was ultimately a winning effort against Chad Mendes that earned the Dubliner the interim UFC featherweight title. Thursday though, McGregor looked healthy, refreshed and ready for the scales and Aldo.

“I wasn’t lying when I said I had a helluva lot of adversity to overcome in that last camp,” he said. “The training was tough, it made the (weight) cut even tougher, and here you are, you're seeing me in my prime. I came in prepared, no corners cut. I put the work in. Saturday night I reap the rewards.”

Aldo, who arrived in Las Vegas on Tuesday, also looked to be well on his way to a successful weight cut. The Brazilian, who hasn’t lost in 10 years, went through a brief stretch and then some pad work, smiling with his coaches before adopting a sterner look when queried by the media in attendance. Maybe it was the pro-McGregor crowd interrupting his answers with chants, or just a desire to get these obligations over with and get to the fight.

As for the fight, Aldo repeated the mantra he’s held throughout the lead-up to the bout.

“On the feet I'll knock him out, on the ground I'll submit him,” he said. “Wherever this fight goes, I'm gonna end it.”

The two featherweight stars didn’t come to face to face Thursday, but after Wednesday’s stare down following the UFC 194 press conference, McGregor feels like he’s got Aldo’s number. 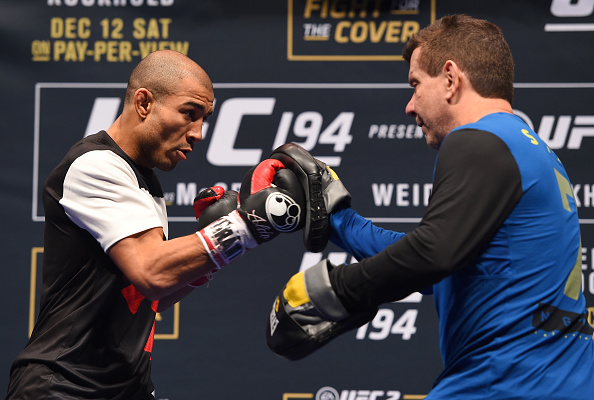 Aldo hasn’t paid much, if any, attention to such comments, knowing that it will be his fists and feet that will answer back on Saturday.

“I just have to go in there and do my job, that's it,” Aldo explained.

McGregor feels like there’s more to it than that. This weekend isn’t just about doing a job; it’s about an undisputed championship, a spot at the top of the pound-for-pound list and respect.

But does Aldo have his?

“Respect, for me, is earned through battle,” McGregor said. “If he shows up, fights with his heart, you have my respect. But I cannot respect a man that has run, that has evaded. If he stands across from me in the Octagon and gives me the exchanges he says he can, he will have my respect.”