Despite Conor McGregor’s many accolades and accomplishments in MMA, his UFC 205 opponent, lightweight champion Eddie Alvarez, isn’t impressed with the Irishman’s resume.

“The guys he’s faced are nothing like the caliber of fighter I am,” Alvarez said during Wednesday’s UFC 205 media conference call. “He will see on the night of the fight that (he’s) been going up against sh*tty opponents that were good style matchups and this one is not – and (he’s) f**ked.”

The McGregor show is about to take center stage in one of the most iconic venues in sports: Madison Square Garden in New York City, on Nov. 12. In the main event, McGregor will attempt to become the first-ever two-weight simultaneous world champion when he challenges Alvarez.

Almost every opponent “The Notorious” has faced claims he has ignored the hype, McGregor said. But when the Octagon door closes everything changes.

“I will go out there and punish him for those words that he’s saying and I’m going to retire him on this night.”

The verbal discourse between McGregor and Alvarez definitely intensified during their final media obligation before the official start of fight week. McGregor laid out specific plans about how he’s going to beat Alvarez.

“He’s been through a hell of a lot of wars. He’s been dropped continuously and I can see the effects of war on his face,” McGregor said. “I’m going to toy with this man. I’m going to really, truly rearrange his facial structure. His wife and kids won’t ever recognize him again.” 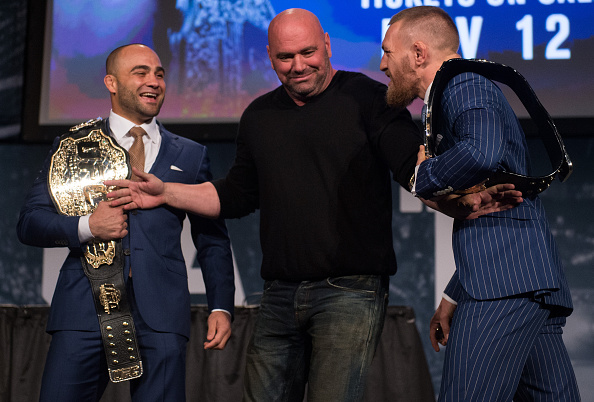 The lightweight champion took specific exception to McGregor’s alleged “running” from Alvarez’s training partner Frankie Edgar, who takes on Jeremy Stephens on the prelims of UFC 205.

McGregor and Edgar seemed to be on a collision course as the Irish superstar made his climb through the ranks. But a loss against former champion Jose Aldo last time out put Edgar at the back of the line.

But McGregor countered immediately, saying he had every intention of fighting Edgar but the New Jersey featherweight didn’t get it done when it counted.

“This should have been me and Frankie, we all know that. He just wasn’t good enough,” McGregor said. “He had 50 minutes (in two fights against Jose Aldo) to do what I done in 13 seconds, and he couldn’t do it. So here I am in his hometown and there he is on the prelims.”

There are sure to be more verbal jabs before the real ones start flying on Nov. 12, but Alvarez seems to be taking an “I’ll believe it when I see it approach” when it comes to the fighting prowess of McGregor. The lightweight champ doesn’t feel he’ll be tested at all and plans to begin his true reign after UFC 205.

“I will go down as the best lightweight in UFC history. It will start with him and then I’ll make UFC great again and continue to fight the number one guys that belong here,” Alvarez said. “I felt I deserved a break and this will be my break, and then we’ll get back to some real sh*t. Get back to fighting the real number one contenders who fight the best guys and earn their way to the title. Not the guys who have a funny accent and sell tickets.”

Don’t miss UFC 205 live on Pay-Per-View Saturday, Nov. 12. Tickets are still available to be part of history at the first-ever UFC event at Madison Square Garden.