An enraged Eddie Alvarez dropped a chair behind the Irishman, setting off an altercation that required UFC President Dana White to step in between the two rivals.

After he was late for the show, McGregor was at the receiving end of daggers visually torpedoed in his direction by the other five fighters on stage. But as “The Notorious” has pointed out time and again – it’s the McGregor Show and he runs on his own time.

Once the melee ended and all the fighters pulled their chairs up and settled in for the press event, McGregor answered questions, played mind games, slung some insults and even took time to pose for pictures for a front row photographer.

Tonight Alvarez and McGregor finally collide for the UFC lightweight championship in the main event of UFC 205 at Madison Square Garden in New York City – the UFC’s maiden voyage into arguably the world’s most famous arena.

Nobody executes in the fight game, both on the mic and inside the Octagon, like Conor McGregor. But Alvarez thinks he has what it takes to shut up McGregor.

“I think regardless of what is said to the media, I think it’s known to him and his camp what I possess and what I can do,” Alvarez said. “I don’t need to say much -- I just needed him to sign the paper and now it’s signed and the deal is done for me. My preparation is done, my plan is set and I’m ready to execute on Nov. 12.”

An emotional Alvarez looked as if he was becoming unglued at the press conference. When McGregor arrived late, Alvarez stormed offstage. When he returned, he immediately snatched his belt back because McGregor had placed it at his seating position while the champ was backstage.

But after the press conference ended and the two men completed their final media responsibilities during satellite TV interviews, Alvarez regrouped. Most opponents crumble in the back-and-forths with McGregor, but Alvarez went barb-for-barb with the best in the game.

The mental aspect of the fight has been a factor in almost all of McGregor’s contests in the UFC. From the chair of “Mystic Mac,” Alvarez is no different than anyone else he’s fought.

“I look into these people’s eyes and they don’t see it as a reality yet,” McGregor said. “He’s claiming it’s an easier contest, but I look forward to when the eyes shift and the eyes roll and the electric shock darts through his whole body. I’m going to retire him on this night. He’s been through a hell of a lot of wars and he’s been dropped continuously. This will be it for (Alvarez).”

McGregor is certainly the king of trash talk, but the featherweight champion has made his name on backing up his grand claims. He holds the fifth-highest knockdown rate in UFC history and that’s at any weight class. The power generated from his thunderous left hand has proved to be debilitating. 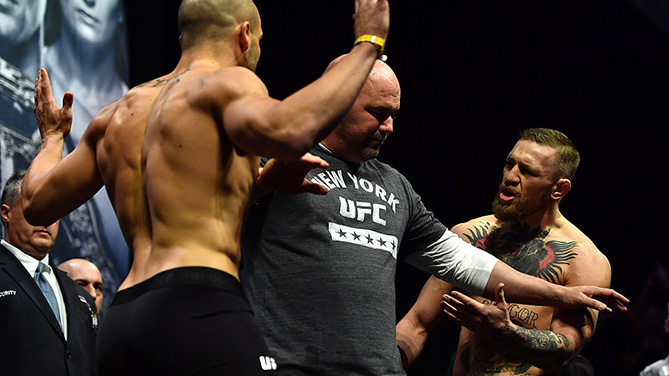 Alvarez is a grinding wrestler with an elite boxing acumen of his own. His performance against Rafael Dos Anjos to win the title was stunning. He landed 57 percent of his significant strikes thrown in the fight -- 15 percentage points higher than the UFC average. In four fights inside the Octagon, Alvarez has landed 10 takedowns and hasn’t been taken down a single time.

Confidence comes at a premium in this sport and Alvarez feels like he’s on top of the game.

“I think every single fight you learn a little bit more about yourself as a champion,” Alvarez said. “But I think it’s when you get your belt taken away and you’re no longer a champion, I think that’s when you grow the most. I’ve been a world champion, I’ve fought the best in the world and I’ve always learned and grown.”

The time for talking has now ended; we’re on the doorstep and ready to ring the bell ahead of the biggest fight in UFC and MMA history. Two belts has been the goal for McGregor ever since he came to the UFC and at UFC 205, he finally gets his chance to make history.

“It’s never been done before and it’s never been even close to a reality in this game – in the UFC,” McGregor said. “To do it on such a monumental stage like this, of course, this will be one of my shining moments.

“I believe in everything I have here that I will put this man away. But I am prepared for five rounds. … Let’s enjoy this moment right now because it took so long to get here. So many hours went into getting the UFC into New York.