McDonald sticking to what he knows best vs Lineker 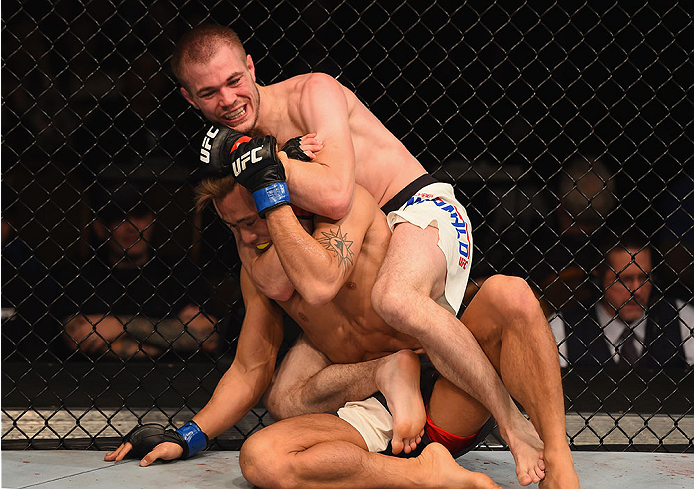 After spending two years battling injuries and working his way back to the Octagon, the opening round of Michael McDonald’s comeback fight gave him flashbacks to a contest he would really prefer to not think about all that often.

Facing off with Masanori Kanehara on the preliminary card at UFC 195 in January, the action moved to the canvas and the Japanese veteran caught McDonald in an arm-triangle choke.

“The thought process was, ‘No friggin’ way!’” the bantamweight contender laughs, recalling what was going through his head as he lay trapped on the mat. “I was having flashbacks to Renan Barao and him arm-triangling me and I was thinking, ‘I’m either going to explode out or I’m going to pass out; I’m not going to tap to this.’”

Against Barao, the Modesto, California native tapped, bringing their interim title bout to a close. Against Kanehara, McDonald escaped and regrouped, turning the tables in the second round and capitalizing on a brief opening to sink in a submission of his own, forcing the former Sengoku featherweight champion to tap.
RELATED CONTENT: Free Fight - McDonald vs Miguel Torres | Matchup: McDonald vs Lineker | Fighter bio

“It felt good in a way and it felt bad in a way,” McDonald says, reflecting on the victory that pushed his record to 17-3 overall. “He was an amazing opponent and the best grappler I’ve fought in my life – very impressive – so it’s never feels good to have anybody get the better of you in anything, but it did feel good to come back. 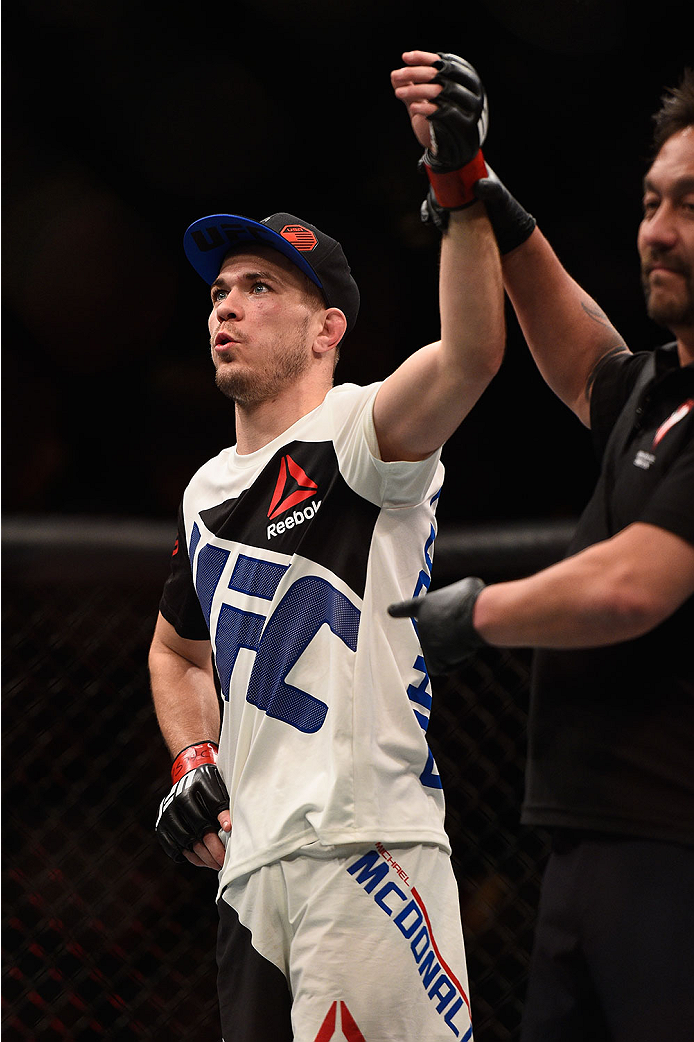 Not long after the 25-year-old contender returned to the win column, Dominick Cruz edged out TJ Dillashaw to reclaim the bantamweight title he never lost in competition. That victory, combined with the ascension of several talented young fighters – McDonald very much included – has thrust the 135-pound weight class in to the spotlight and made it the most interesting division in the UFC at the moment.

Wednesday evening, “Mayday” has the chance to make it two-in-a-row and cement himself as a Top 5 staple in the bantamweight ranks when he takes on John Lineker in the main event of the UFC’s debut fight card in Sioux Falls, South Dakota.

With a ton of talent jockeying for position in the rankings and a dangerous foe in front of him, McDonald is excited about what’s on the horizon and he uses the surging crop of fighters looking to stake their claim to a place in amongst the bantamweight elite as motivation to ensure he’s putting everything he has into every training session.

“It lets me know, ‘Listen dude – you can’t slack.’ I have to do my absolute best and I can’t just say, ‘I think this is enough for today.’ Every single day, I have to make sure that I do it to the absolute best of my ability. If that means pushing myself until I drop, that’s what I’ve got to do.

“It makes me be very serious, which is a good thing,” he adds. “I think at times, if you think you’re going to blow through everybody, it can make you lazy. You might be able to get through a couple years, but eventually, if you’re not doing that, it’s going to catch up to you.”

And McDonald has no intention of letting Lineker or any of the other championship hopefuls in his rearview mirror catch up to him any time soon, which means hitting the cage on Wednesday evening at the Denny Sanford Premier Center and sticking to the blueprint that carried him to this point in his career.

“This is a very interesting thing and some place where a lot of the MMA world is split,” he says of preparing for specific opponents or taking a “stick with what got you here in the first place” approach to preparation, admitting that he lands in the latter camp.

“You don’t see the champions changing their game plans every day based on their opponents; they are themselves,” he argues. “(Dominick) Cruz has been the same way since he came in and no one has been able to figure out his puzzle. (Jose) Aldo has been Aldo since the very first time we saw him. He gets better at what he does, but he doesn’t change his game plan; he doesn’t change his plays.

“I really think that is the superior strategy and that’s kind of what I do.” 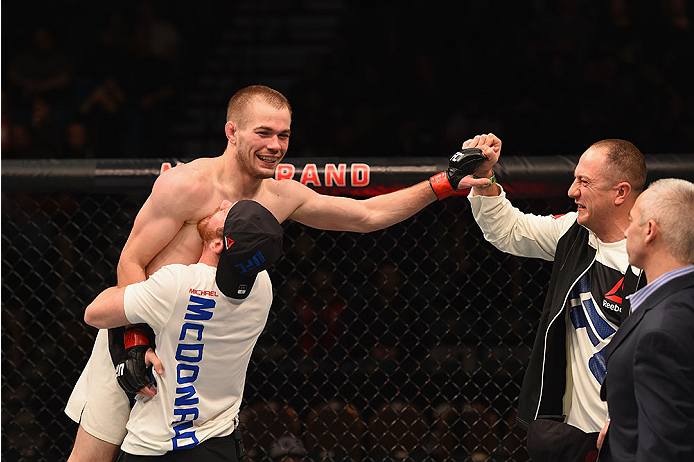 Lineker has made an instant impact since moving up to the bantamweight division after his positive results at flyweight were marred by numerous instances of the Brazilian slugger failing to make weight. After getting the better of Francisco Rivera in one of 2015’s best rounds, “Hands of Stone” made it two straight in his new surroundings by scoring a unanimous decision win over Rob Font at UFC 198.

“I know John Lineker is good at what he does – everybody has got to be good at what they do if they’re in the UFC,” McDonald offers. “There’s not going to be any slouches. This isn’t amateur stuff; this is the best in the world, so you can expect that everyone is going to be good and they’re going to have their strengths, but I’m really just going to be me. He can throw whatever he wants at me and I’m prepared for every technique.