“I asked my conditioning guy once I hit 265 if there was any chance I
could ever make 205. He said you couldn’t make 245 without some form of
illness.” - Sean McCorkle 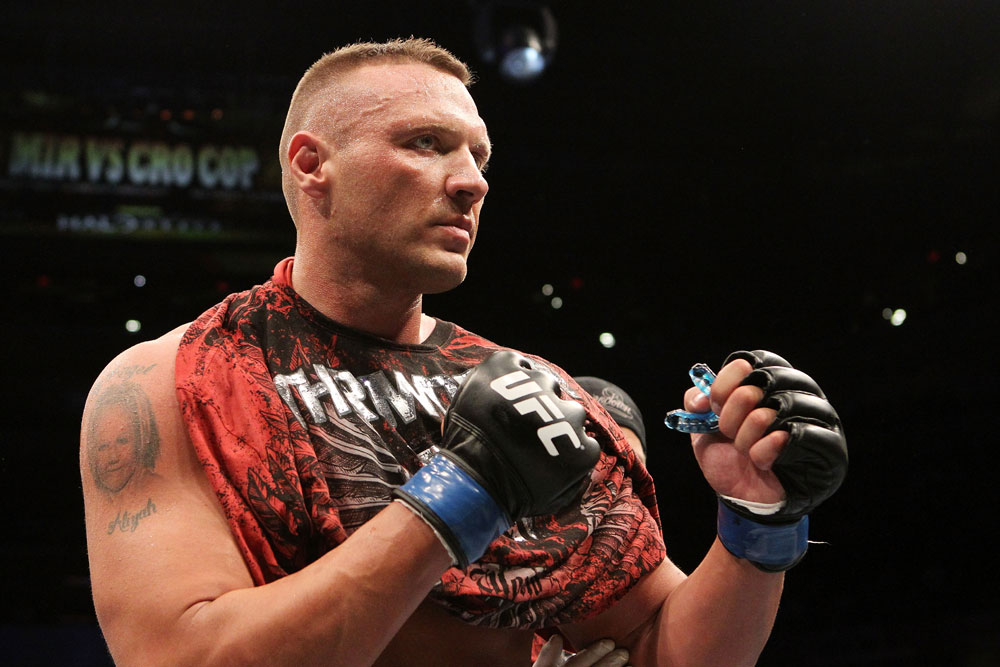 Sean McCorkle was crushed. For all his pre-fight antics and Twitter wars with prospective opponents, at his core, he’s a fighter and a competitor, so losing to Stefan Struve at UFC 124 last December was something he couldn’t get his head around as he sat in the locker room in Montreal’s Bell Centre.

“It was the first time I’ve ever lost a fight in my life, I’m devastated, and I’m back there getting texts,” he said. Most of them centered on the theme of ‘we still love you,’ ‘You did good,’ ‘You’ll be back,’ etc.

Then McCorkle, who ironically entered the Octagon to the strains of DJ Khaled’s ‘All I do is Win’, got a text from his younger brother.

“Hey, I know a guy that can remix that song to say ‘all I do is win most of the time’, and you could use it for the next one.”

Finally, McCorkle was able to smile.

“I started laughing,” said the 6-foot-7 heavyweight, who points out that his brother followed up the text with another one reading ‘Sorry man. What can you do but laugh?’

He was right. There was nothing he could do now. It was in the books, he was 1-1 in the UFC and 10-1 overall, and it was time to move on. McCorkle admits that he “was so sad to lose because it was a big opportunity for me,” but even in defeat, he earned some respect for his initial assault on Struve.

As the bout opened, the Indiana native took his foe to the mat almost effortlessly and sunk in a kimura, making it almost identical to his UFC 119 win over Mark Hunt. He had to be thinking, ‘wow, this UFC stuff is easy.’

“That’s exactly what I was thinking,” he laughs. “As soon as I took him down, I was getting the kimura and I finish everyone with that; I finish black belts with that because I’ve got such a strong grip. But I didn’t count on him being more flexible than Gumby. At one point I had his arm turned completely the other way and he didn’t grunt and didn’t make a sound. He showed me afterwards that I guess his shoulders are double-jointed and he never gets finished with those because he’s so flexible. But as soon as I grabbed his wrist, I thought ‘I can’t believe I’m about to win two fights, both in a minute, in the UFC.’ I couldn’t wait to get on the internet and rub it in.”

Struve wouldn’t go away that easily though, and after reversing position, he finished McCorkle with strikes at the 3:55 mark. But as far as McCorkle is concerned, the fight was over before referee Yves Lavigne made it official.

“I won’t say it broke me mentally, but that was really, really discouraging when I had it (the kimura) locked up and I couldn’t finish him with it,” he said. “Because Struve’s not a guy who you’re probably gonna finish with ground and pound from what I’ve seen. He didn’t quit after what (Christian) Morecraft did to him in the first round and that’s as bad a beating I’ve ever seen anyone take.”

So if you’re wondering what could happen next for “The Big Sexy”, McCorkle’s next foe is the aforementioned Christian Morecraft. The two have a common foe in Struve, who stopped Morecraft in the second round of their bout last August, but that’s about all they share. McCorkle is a submission specialist, Morecraft likes to bang; McCorkle likes to talk a little (or a lot) before a fight, Morecraft is the MMA version of the quiet man. So unlike the Struve fight, McCorkle has pretty much been on his own in terms of hyping the bout up.

Say it ain’t so, McCorkle. How about a catch weight fight?

“Not without a severe drug addiction or illness,” he deadpans. “I asked my conditioning guy once I hit 265 if there was any chance I could ever make 205. He said you couldn’t make 245 without some form of illness.”

That’s Sean McCorkle, full of one-liners that can immediately bring a smile to your face even if you’re the butt of the joke. Morecraft isn’t biting though, and maybe that’s a good thing, because eventually, you’re going to have to fight, and the less emotion you bring into it, the better. That’s never been a cause of concern for McCorkle, and despite his “internet savvy”, he has been hitting the gym pretty hard to prepare for Saturday’s bout in Seattle.

“He (Morecraft) has pretty good conditioning for a guy his size,” he said. “Of course I’ve got terrible conditioning so maybe that’s why I was impressed. But he beat Struve up pretty good and didn’t seem to slow up between the first and second round. I know he’s not ready for a sucker leg kick off a glove touch, so I have to consider that to be part of my strategy. And obviously I don’t want to be on my back against him, getting beat up that way, but I don’t think he has the wrestling to take me down and I don’t think he has the wrestling to keep me from taking him down. Not that I’m a phenomenal wrestler, but I work out two days a week with Tom Erikson and have been every week for three or four months now, so when you wrestle with that monster, you get pretty good pretty fast.”

At this point in the game for the 34 year old, it’s not about reinventing the wheel; it’s about sharpening your tools and imposing your game on your opponent. If McCorkle can do that, he will be able to put the Struve fight in the rearview mirror. And after a brief UFC stint that has seen him go from the first fight of the night in his hometown to a featured main card spot against a top prospect, he’s not about to get rattled by anything at this point.

“If Morecraft beats me for 15 minutes, I guarantee I’m gonna be relaxed at the end of the fight,” he said. “I’m not gonna be stressed, I’m not gonna be pressured. My goal is not to think about the fight until the fight’s happening.”

And most of all, he’s not going to lose his sense of humor.

“I don’t know where I stand in the company, so I’m approaching this like I’ve got to win or they’ll cut me,” said McCorkle before giving his 2011 forecast. “I will either be in contender status in the UFC by the end of 2011 or fighting in local shows for virtually no money at all.”