McCann on her UFC debut: 'I'm gonna get a big finish' 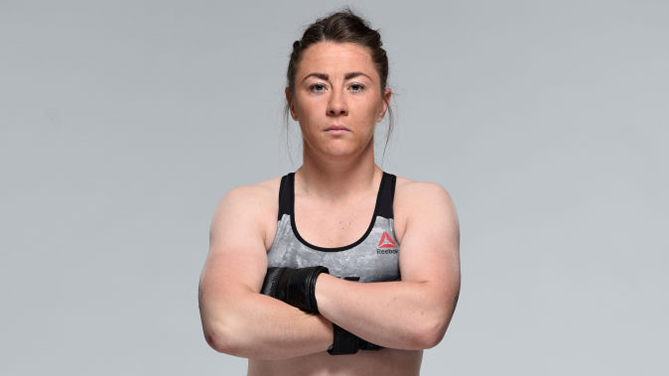 When the UFC made the March announcement that the Octagon would be setting up shop in Liverpool’s Echo Arena on May 27, welterweight contender Darren Till was a given to be headlining in his hometown. But who else from Liverpool?

The internet had an answer, and her name is Molly McCann.

“How can you have a show in Liverpool and not have me on it?” she laughed. “There’s another lad, Paddy Pimblett, and if you didn’t have me or him on the card, it just shouldn’t have even been in Liverpool.”

She’s right, and soon after, “Meatball” Molly was signed to the promotion and put in a fight with TUF 26 veteran Gillian Robertson. McCann was happy, the internet was happy, and most of all, Liverpool was happy.

“I’m not gonna lie,” she said. “I think there would have been a riot if I didn’t get on. Liverpool is a working class city. It’s a little bit like Cleveland. They all get behind their sports stars like no one else, and everyone knows everyone, so everyone kind of comes on the journey with you. So for me to make it means everyone else has made it. It’s nice to know the city gets behind me, as well as the rest of the UK and Europe.”

There’s no surprise as to why the 28-year-old has become so popular over the years. Yeah, she can fight – her 7-1, 4 KOs record proves that. And she has a nickname that gives Luis “The Violent Bob Ross” Pena a run for the best in MMA. But maybe it’s her personality and confidence that puts everything over the top. Add it all together, and the women’s flyweight division may have a new star on its hands.

Open work outs. Big shout out to every single fan coming to support Darren and I. And thank you to @calder_27 @thai_coach_si @nextgenmmalpool and @paigewilliams10 for coming and keeping me inform. Anyone with pics tag me in. LIVERPOOL I LOVE YOU @yokkao
A post shared by Molly McCann (@meatballmolly) on May 24, 2018 at 12:45pm PDT

And to think, MMA could have lost her to boxing if not for one Ms. Ronda Rousey.

Already in the gym and on the verge of making noise in the world of boxing, McCann was an ABA champion in the ring, but with her weight class not included for women in the Olympic Games, she was approaching a crossroads, one that coincided with the UFC debut of Rousey against Liz Carmouche on February 23, 2013.

“I needed something a little bit more, and MMA was it,” McCann said. “The different light that Ronda Rousey showed was what made me try it. I had watched it before and I was a fan of it, but I never thought I’d give it a go. And seeing her, she just glamorized it and I thought, ‘I want to do that.’”

Once she saw Rousey’s win in the main event of UFC 157, McCann didn’t sit on this decision to tackle MMA for a few days, a week, or a month. The day after the bout, February 24, 2013 (and this date is important), McCann began training for her new sport, not to see the inside of a boxing gym until this camp for Robertson.

“Up until this fight camp in MMA, I haven’t been in a boxing gym,” she explains. “It’s only this fight that I started going back to the boxing gym. I left boxing to do MMA. I didn’t leave boxing to be a boxer who does MMA. I know how sharp my hands were without boxing in MMA and now the American girls are a little bit more grappling-based, so I know I can sit on my shots a little bit more and if they get hit with it, they’re probably not gonna like it as much as what Europeans are. If you look at Joanna Jedrzejczyk and Karolina (Kowalkiewicz), the European girls bring it with the striking, and I know big finishes and big bonuses are coming my way.”

But between those early days and Sunday night, there was a new sport to be learned, fights to be fought and belts to be won. And after going 6-1 on the European circuit, McCann was signed to headline Echo Arena and face Bryony Tyrell for the Cage Warriors title.

The date, February 24, 2018. Five years to the day when she first began training for MMA. If it was Hollywood, they would turn it down and say no one would believe it. But it was true, and McCann delivered, stopping Tyrell in two rounds.

“Anyone that you speak to that’s in the UFC believes they’re going to go all the way, but I kind of think it’s really fate,” McCann said. “Five years to the day, I won the title. Then I got signed to the UFC and then the UFC’s in my hometown and I know I’m gonna get a big finish there and it’s all kind of been written in the stars for me to make waves, I think.”

Given all that, you have to assume that the first-time UFC jitters may be dodging “Meatball Molly” this Sunday. She would agree.

But will it feel the same for her three months after her biggest win, where she headlined at home? She admits that nothing could replace that night, but that this one will have its own special feeling to it, especially with the Liverpool crowd back out in force.

“Riding off the back of Darren and the hype he’s got behind him, if you’ve seen UFC Dublin when Conor was on it, that’s what’s UFC Liverpool is gonna be like,” she said. “But someone asked how does this compare to the last fight? If you can imagine five years to the day, I’m the first female to headline an arena in Cage Warriors, I win the belt in the city, it was my lifelong dream coming to fruition. So does fighting in the UFC in my hometown compare? Does it mean as much? It means as much, but I don’t think I’ll ever feel the way I did that night when you win your first world title. There’s something special about it. But fighting in the UFC is the crème de la crème, and I just cannot wait to put on the gloves, velcro them little UFC bad boys on, and punch Gillian Robertson in the head.”