Floyd Mayweather may be the best defensive fighter in the history of combat sports, but the man considered by many experts to be the best boxer of all time plans to go on the offensive against Conor McGregor on Aug. 26.

“Money” Mayweather told ESPN’s Stephen A. Smith that he will “go at Conor McGregor” when the two collide in perhaps the biggest box office fight in the history of the fight game in two weeks at T-Mobile Arena in Las Vegas.

Get tickets now to Mayweather vs. McGregor at T-Mobile Arena in Las Vegas on Aug. 26

During his media workout at the famed Mayweather Boxing Club Thursday afternoon, Mayweather explained that his bout with McGregor is bigger than any other fight.

"This isn't just a fight, this is an event,” he said. “We both owe the fans and everyone tuning in a lot of excitement. That's what we're there to give them.” 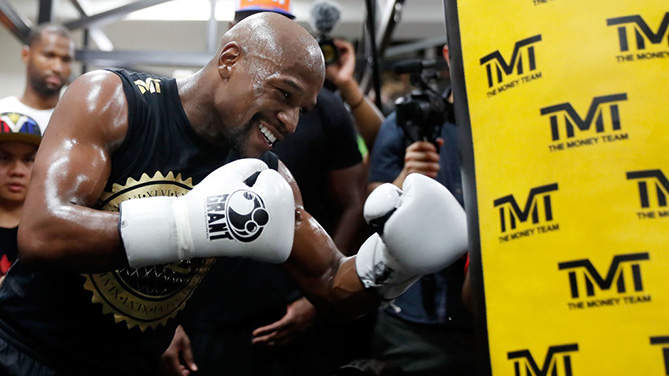 Mayweather also told Smith that he feels a responsibility to fans who may have felt unsatisfied with his last mega-fight against Manny Pacquiao. But part of Mayweather’s greatness is his ability to make great fighters look average.

Enter Irish sensation McGregor, who has made his name on delivering on lofty predictions. “The Notorious” said he will knock out Floyd within four rounds. The boxing icon is taking the UFC two-weight world champion seriously.

“He’s confident,” Mayweather said. “I know I'm going to face a warrior. On paper we know he's taller and has a long reach. He has youth on his side. People say that he has power on his side.

“They’re always confident, but it’s a little different when you get in there with Floyd Mayweather. Because when the bell rings and you’re across from me and you look around: damn, it’s really here. For me it’s just another day.”

After Mayweather finished answering questions, he made his way to the main gym to put on a workout for the assembled media members.

Now 40 years old, Mayweather said camp has been different since he last fought over two years ago. But he still feels ready to go.

“I've been pushed really hard by the young guys in camp,” Mayweather said. "It's my same old routine, but I'm older now so I have to let the body rest a lot more.

“With age comes wisdom. When I was a lot younger I would just train and train and never let myself recuperate. When I come back from resting I come back rejuvenated and with a lot more spark.

“I've been here before and I know what it takes.”

Matt Parrino is a digital producer and writer for UFC.com. Follow him on Twitter at @MattParrinoUFC
Save