As the world awaits this week’s four city, three-country tour to officially announce the Aug. 26 bout between Floyd Mayweather and Conor McGregor, many believe this quartet of face-to-face meetings between the future boxing Hall of Famer and the UFC lightweight champion may constitute Round One of their fight.

Yet while former two division world boxing champion Paulie Malignaggi believes the mental game is key in determining the result of Mayweather-McGregor, it may not be in the way most think.

“Conor probably does win the trash talk war; I’d be surprised if he doesn’t,” said Malignaggi, who is part of the Showtime broadcast team for the fight. “And I’m not sure that Floyd even cares.

“He’s at the point where he knows what he’s going to do when the bell rings. So Conor’s going to have to bring something to the table physically for it to worry Floyd, and he’s going to have to do it relatively early in the fight in order to show Floyd that, ‘Hey man, this isn’t the picnic you thought it might have been.’”

RELATED: The Blueprint: McGregor vs. Mayweather | Dana White and Leonard Ellerbe talk about the historic fight

Of course, the million dollar question is whether McGregor has the tools to threaten the 49-0 Mayweather in a boxing ring, even though the Dubliner has never fought professionally as a boxer. That’s what the seemingly endless days in training camp are for, and as far as Malignaggi is concerned, that’s where the mental game will make its first appearance.

“I remember sparring world champions in my early days and catching royal beatings in the gym,” Malignaggi recalled. “And I’d go home thinking, ‘Can I achieve the level I want to be at one day? I was a novice. And Conor is a relative novice in boxing.”

So what’s the key for McGregor to parlay his skill in mixed martial arts into a boxing match against the best of his era? It has little to do with right hooks and left crosses for the southpaw.

“A training camp is a weird thing because it lasts for months and not every day is a good day,” Malignaggi said. “Now you’re doing something that you don’t specialize in. Mixed martial arts is what Conor specializes in, and if he has a bad day, he knows he’s going to regroup and have a good day.

“Boxing is something new to him in that you’re almost taking the rookie approach. But Conor strikes me as a guy who’s going to be confident no matter what he’s doing, especially when it has to do with combat.”

If he dies. He dies. pic.twitter.com/MsjHIMUY3o
— Conor McGregor (@TheNotoriousMMA) July 8, 2017

That confidence has been a key component of McGregor’s success, as he emerged from obscurity to win two UFC titles and become the undisputed king of his sport. Another key has been the 28-year-old’s ability to get in an opponent’s head and him them out of his game before the fight even starts.

No one knows this aspect of combat sports better than Malignaggi, who engaged in more than his share of mental battles with opponents over the course of a 44-fight career that saw him fight the likes of Miguel Cotto, Zab Judah, Adrien Broner, Ricky Hatton, Amir Khan, Juan Diaz and Danny Garcia.

Does this gamesmanship master think McGregor can get into the head of “Money” Mayweather?

“I think it’s going to be hard to get in Floyd’s head pre-fight and that doesn’t mean Conor won’t win the trash talking battle because I think Conor is louder and more in your face at this point,” Malignaggi said. “One thing about a fighter who’s a little bit older like Floyd is that trash talking becomes less important to you.

“When you’re young and trying to break through and be a star and you want all eyes on you and you’re just determined to be a megastar, you have this loudness about you, this ‘look at me, I’m in your face’ mentality, and Conor’s at the age where he has that. Floyd is past that already, Floyd was like that. And when you’re past that, the trash talk doesn’t really bother you as much.”

Yet as untouchable as Mayweather has been in the ring, the 40-year-old is human, and according to Malignaggi, there are some signs that “The Notorious” one may be starting to get to “Money” in advance next week’s media tour. And there are also signs that McGregor may be overwhelmed by the moment as well.

“If you can get somebody to act outside of their nature, I would say you’re a little bit in their head,” he said. “If Conor McGregor shows up and he’s not trash talking in the press conferences, he’s possibly over thinking things. If Floyd is overly loud, like he hasn’t been in years, it’s possible that this is in his head.

“When I was trash talking, I would always look for traits that guys hadn’t shown in the past that they were showing in a press conference with me. If I felt like they were changing just for me, I felt like I was in their head.”

Not that this technique is proven, Malignaggi added.

It didn’t always work for me,” he said with a laugh. “Just because you win the mind game at the press conference doesn’t mean you won the fight in the ring. You still have to compete in the ring and make it happen on fight night.”

And it’s in the ring on Aug. 26 where McGregor will have to truly show that he’s got the right stuff, not just in his fists, but upstairs. 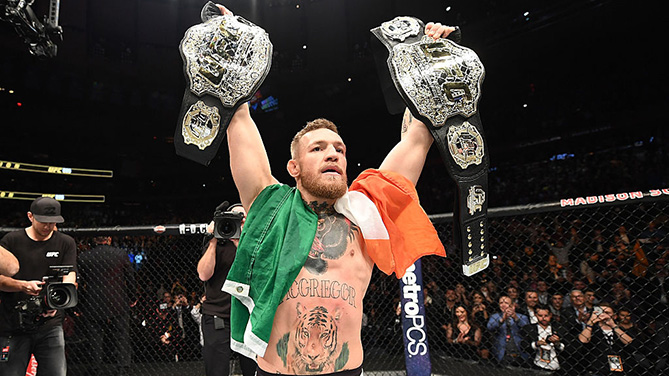 “Conor’s a winner,” Malignaggi said. “You don’t get to this point in your life unless you’re a winner. And leading into the fight, I think Conor’s going to believe in himself a lot. He’s always been a guy who’s had extreme self-belief. It’s whether you can continue to believe in yourself in moments when it’s not going so great. That’s really where the inner character comes out, and it’s not easy.”

As experience shows, all opponents at this level have the ability to fight back from the brink.

“One thing I told myself when I got to the highest level against Miguel Cotto was that this will be an opponent that even if I have certain moments, he will roar back,” Malignaggi said. “He’s not just going to accept the defeat. My other opponents, maybe they were easier to convince that they were getting beaten once they were getting beaten up. These types of opponents, you start beating them up and they’re not convinced that they’re going to get beat yet. As a matter of fact, they’re convinced that they’re going to turn the ship around.