Maynard's Road Back Right on Schedule

"I don’t really care what he thinks or the game plan he brings. My focus is on me and being the best I can be for the scrap." - Gray Maynard 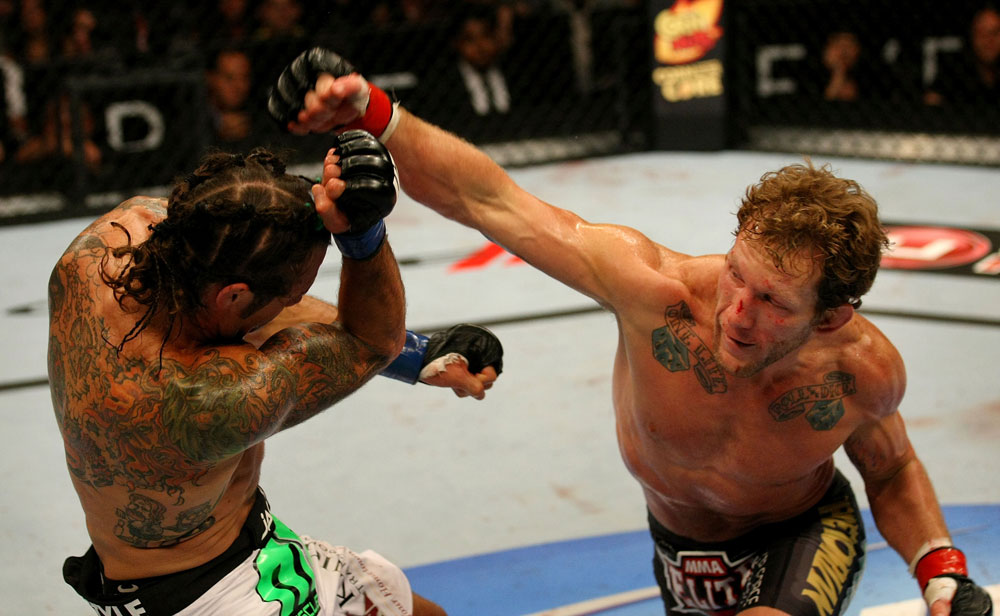 Gray Maynard understands the road back to title contention will come one step at a time. While the destination of becoming the best lightweight in the world remains the ultimate goal, the journey has proven to be a worthwhile cause as Maynard has once again found his peace of mind in the fire of competition.  It’s a feeling he knew he had lost touch with in 2011, but after making several life-altering changes, “The Bully” is focused on making his run back to the top of the 155-pound weight class.

The former three time All-American wrestler felt in his heart a change needed to be made, and decided to leave the desert of Las Vegas for the breaking waves of the Santa Cruz shores. The relocation has made all the difference, and just as his smile has returned, so too has the passion to prove he’s one of the world’s best.

“I’ve never been happier,” Maynard said. “I made a lot of big changes in my life and they have all proven to be great decisions. I’m surrounded by good people who all push me to be better. I couldn’t ask for a better situation and I’ve never been more motivated to get after it than I am right now. I’m living my dream and truly happy.”

After a six-month layoff from the Octagon, Maynard made his return in June against Clay Guida at UFC on FX in Atlantic City. In one of the year’s strangest fights, he was forced to literally run down “The Carpenter” in order to engage the action. After the final bell, it was Maynard who had his hand raised, the split decision victory putting him back in the win column for the first time in over a year.

Strange as it was, the 33-year-old Maynard was happy to be back on track, and anxiously awaited his next opponent. With all the congestion at the top of the division and another lightweight title rematch to wait out, it took a while for the bigger picture to unfold. Once the lanes opened up, the UFC called with an offer for the former title challenger to face fellow Ultimate Fighter Season 5 cast member Joe Lauzon. The two fighters will square off later this year at UFC 155 in December.

“Lauzon will come to fight and I like that,” suggested Maynard. “I think we’ll have a great scrap. If he shows up like I believe he will, it will leave a lot of openings for me to end it early. I’ll take this fight wherever I need it to go in order to get the win.

“He obviously feels he has a big advantage on the ground, but that doesn’t mean I won’t put him on his back. It’s a fight. Anything can happen and winning is the only thing that matters to me. I’m going to be looking to finish this fight at all times.”

On paper the bout appears to be a classic “Wrestling vs. Brazilian Jiu-Jitsu” matchup. Both fighters have used their respective backgrounds to find success inside the Octagon, but both Maynard and Lauzon have also shown a willingness to stand and exchange, giving the bout the potential to become one of the year’s best.

Lauzon recently stated this was a fight he asked for, and while Maynard doesn’t agree with that time line, he’s very much looking forward to the throwdown.

“Lauzon is saying he asked for this fight and it’s funny because we made the call for it too,” Maynard said. “It’s a fight that makes sense for what is going on the division, so let’s do this. I guess he’s a little better with the PR side of things and felt he needed to get to work on that early. It really doesn’t matter to me. We have to fight and I’ll fight that dude anywhere.

“I don’t really care what he thinks or the game plan he brings. My focus is on me and being the best I can be for the scrap. He’s built up his name; he looked good in his last fight, and this is an opportunity for me to get a win over an opponent with a solid name.“

Since the end of “The BJ Penn Era,” the lightweight division has become a shark tank. The past two years have seen the division rise up to become one of the UFC’s most competitive. With the division’s best all slated for late 2012/early 2013 showings, the stakes have never been higher.

Maynard understands the importance of every fight, and knows that a victory over Lauzon will push him higher up the divisional ladder, while a loss would reshuffle him in the deck. It is a situation he’s been in before and the former Michigan State Spartan is excited to prove that the top of the division is where he belongs.

“This is a big step up for him and every time he’s had an opportunity like this, it hasn’t worked out too well,” offered Maynard. “Other than his fight with Melvin Guillard, Lauzon hasn’t responded when the pressure is on. We’re going to scrap, and when it’s all said and done, one of us will be closer to a title shot.

“This division is one of the most competitive in the sport. I know what it takes to be at the top of the weight class and I’m working my way back to that title one fight at a time. This is a big opportunity and I’m going to come into this fight with Lauzon more prepared than I’ve ever been. I’m going to prove why I deserve to be at the top and he doesn’t. “