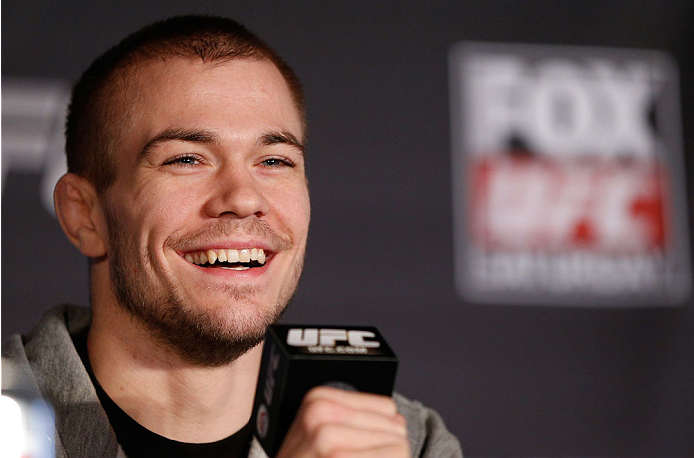 Seven-hundred-forty-nine days – that’s how long it will have been between fights when Michael McDonald crosses the threshold into the Octagon on Saturday night to face Masanori Kanehara at UFC 195.

Once the brightest young star in the bantamweight division, McDonald challenged then-interim champion Renan Barao for the title and became a fixture in the Top 5 as a 22-year-old, amassing a 16-3 record with five victories in his first seven UFC appearances, his only setbacks coming against Barao and perennial contender Urijah Faber.

More than two years after losing to “The California Kid” on FOX and dealing with a series of injuries, the Modesto, California native returns as a wild card in a division that has undergone some major shifts since he last competed. TJ Dillashaw dethroned Barao as champion and a new crop of up-and-comers led by Thomas Almeida and Aljamain Sterling have moved into the position McDonald once occupied, both in terms of the rankings and their seemingly limitless potential.

For most fighters, such a lengthy layoff would be torturous and the scant few days remaining before the wait to return to competition is finally over would be a battle to calm nerves and harness energy, but McDonald isn’t like most fighters.

“Honestly, it was nice; I feel like it was good for me,” he says of his extended hiatus from the UFC, a little over a week before he’ll square off with Kanehara in the final preliminary card fight of the January 2 event. “I’ve been fighting very, very often since I was 16 years old; back-to-back fights since I was 16, professionally, with amateur fights and jiu-jitsu competitions before that. That’s eight years of just go, go, go, racking up a whole bunch of fights.”

Keeping that kind of torrid schedule from a young age can be a quick path to burn out, and we’ve seen it numerous times with sports prodigies that excel early in life and then hit a wall, stumbling or slipping off into the ether, never to be heard from again.

Despite the persistent hand and wrist issues that required two surgeries to correct and admittedly enjoying the chance to press pause on his career, the now 24-year-old bantamweight says the idea of his loss to Faber being his final fight never crossed his mind.

“I never once thought that I was going to quit or anything,” McDonald says when asked if the lengthy hiatus had him considering a permanent life away from the cage. “I have many times sat back for a month or so and wondered, ‘Man, is this really what I want to do?’ I’ve questioned many times if I want to be a fighter as a job, but I never came to that conclusion where it was like, ‘I might be done.’ I’ve never felt like that.

“It was never a question whether I was going to come back and fight in the UFC. I always knew that I would.”

Truth be told, he thought it was going to come sooner and he has actually spent the better part of the last year getting ready his return on Saturday night at UFC 195.

“I actually didn’t take too much time completely away,” begins McDonald, who debuted in the UFC just after his 20th birthday with a victory in a Fight of the Night-winning battle with Edwin Figueroa in March 2011. “It took a couple months before we got the surgeries scheduled and it took quite a bit of time to go through the surgery process, but there were a couple of months where I was healthy and I was training and making sure that I could train to my full potential without hurting myself.

“I see all the trouble that Dominick had with re-injuries and injuries over and over again, so I really wanted to make sure that I did it right and I wasn’t jumping the gun,” he continues, referring to former bantamweight champ Dominick Cruz and the myriad injuries that have limited him to just a single appearance over the last four years and change.

“After my hand was fixed, I had a couple of months where I was just feeling it out, making sure my body was healthy, slowing increasing (my training) and then I thought I was going to fight in October. Then it got moved to November and then December and now January, so I’ve actually been training full-time for about six months.”

Having slipped to No. 8 in the rankings in the bantamweight division and with his return date drawing closer by the minute, you couldn’t fault McDonald if he were champing at the bit to get back into the cage and make a statement against Kanehara as a means of showing the fans, media and fighters alike that he’s 100 percent and ready to reclaim his place amongst the division’s elite.

But again, the well-spoken and abundantly talented fighter isn’t wired that way, believing that what matters more is the preparation he’s put into this fight and knowing for himself that he’s a better fighter today than he was that night against Faber two years ago, even if no else is ready to believe him until they see him compete.

“A fight is just a test, like when you go to school and they’re like, ‘We’re going to give you a little quiz to find out what you know, where you’re at.’ That’s all a fight is,” McDonald, who has only gone to the scorecards twice in 19 career bouts, said. “The real learning is done in the gym, not in the cage in front of people and right now, I know I’m far beyond what I was before.

“It’s not about getting back to where I was because I haven’t fought in two years because I know from training that this is the best I’ve ever been. I’m healthy – spiritually, mentally, and physically. I’m ready.”