“I've been looking at Chris Cariaso for a long time, ever since he beat my teammate [Rolando Velesco] and I think I can beat the guy." - Michael McDonald 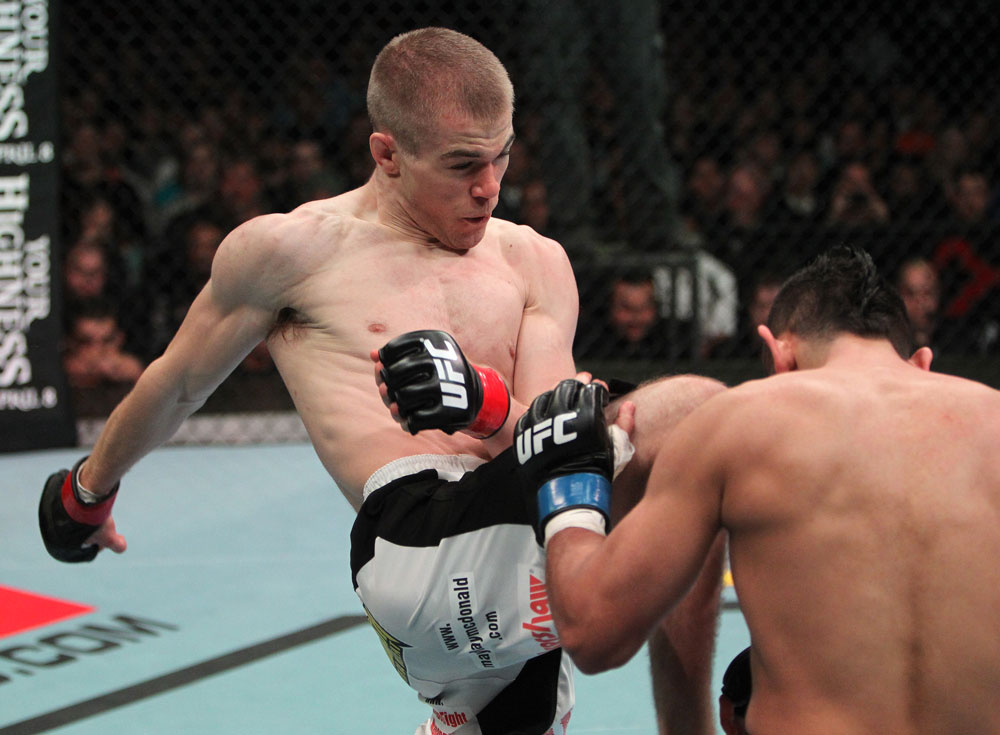 “What lies behind us and what lies before us are tiny matters compared to what lies within us.” - Ralph Waldo Emerson

For the youngest fighter on the UFC’s roster, the time for Michael “Mayday” McDonald to find that inner-strength was the start of the third round against Edwin Figueroa. The immediate past was two winning rounds for the 20 year old and before that, 10 years of MMA training for his UFC debut. The future was a “Fight of the Night” bonus and a successful start to his career in the Octagon. But the present was five more minutes of combat against a relatively unknown opponent who was proving to be his toughest test to date.

On March 26th, the Modesto, California native was expected to face fellow rising bantamweight Nick Pace in his first UFC bout. Less than two weeks out from the event, Pace had to withdraw due to injury. Stepping in to replace Pace on short notice was the heavy-handed Figueroa, which if it wasn’t for a certain social networking website would have been almost a complete mystery to McDonald.

“I knew almost zero about Edwin before the fight. All I knew was he was 7-0, out of Texas, and a kickboxer who was okay on the ground, but nothing special. That's all I knew. I had very little tape on him. I had a few highlight clips that I stalked off his MySpace and that was pretty much it.”

With little more than half a dozen local pro wins and the few highlight clips to go by, McDonald could have never guessed that “El Feroz” would provide him with such an epic battle. It was shades of the UFC 69 three round war between Roger Huerta vs. Leonard Garcia. A young fighter with some buzz (Huerta/McDonald) takes on a late replacement (Garcia/Figueroa) who somehow escapes fight ending moment after fight ending moment all the way until the final bell.

In both matchups, the stakes escalated quickly as Figueroa, like Garcia, threw homerun haymakers as soon as the fight started. “The only thing I was thinking was ‘wow’ this guy swings really, really hard,” recalls McDonald, who outboxed Figueroa with crisp and precise striking for the duration of the round while avoiding Figueroa’s heavy leather. “During the first round I felt great. I knew that he was trying to knock my head off and I was trying to stay as calm as I could and use any openings I saw.”

The first round’s final second was capped off with a punctuation in the form of a right hand by “Mayday” that sent Figueroa wobbling across the cage, but not to the floor. “I was actually surprised he didn't go down because I hit him pretty hard with that thing,” admits McDonald. The sight of the spaghetti-legged “El Feroz” resisting the knockdown was an ominous moment that this fight was far from over. “I was thinking that guy is tough because I just hit him really, really hard and he's still standing. I was like it's on, let's do this.”

The second round was diametrically opposite of the first, with the duration spent on the ground, but it was just as thrilling, with McDonald’s submission attempts and Figueroa’s gutsy escapes. “They were just to the point where I almost had them in,” laments McDonald on his array of sub attempts, which ranged from a rear naked choke to multiple triangle chokes and an armbar. Each tight hold drew an acceptance from those in attendance of the fight’s ending, but each escape caused the crowd to roar louder with Joe Rogan reaching the highest of decibels.

“I had one arm across his neck for the rear naked, but he pulled my other hand off. My hands weren't clasped palm to palm. The triangle chokes were just squeezing his head, so I knew I didn't have those, which is why I was attacking his arm. Most people when they're in a triangle choke, when they're pulling out you crank on their arm and they come back in to defend their arm. But he didn't do that. He didn't even seem to care about his arm. He wanted to get that choke off himself. He did the right thing and he's just a really tough guy.”

Two rounds were in the books for “Mayday”, but there was still more time on the clock and winners are not crowned after only 10 minutes. “I remember after the second round, I barely could walk because my legs were so spent from the triangles,” divulges McDonald, noting that after all the punishment he had delivered to his opponent it was his own body that felt spent. “My legs were filled up with lactic acid and I remember coming back to my corner and praying to God I need your help right now. I don't even know if I can walk back to my corner, let alone fight another round, so I'm going to need some help. Once I got in there, it was just keep going.”

In the final stanza, McDonald found that will to continue on exhausted legs through the help of a higher calling. “I really believe that was God keeping me up and keeping me going,” states McDonald, who holds his spirituality very dear to his heart and uses it as his source of motivation in life as well as the fight game. “I know that God brought me here for a reason and he's not going to send me back home. It gives me a deeper level of believing in myself and what I'm doing than just this is what I want to do because I have nothing else in life.”

The end of third round was met with both fighters exchanging hugs followed by their cornermen and coaches doing the same. It was a brilliant performance by these young fighters showing off how truly awesome any UFC matchup can be, especially in the 135-pound division. Besides an ovation from the crowd reserved for a title fight, the two received $55,000 “Fight of the Night” bonuses, which were much deserved.

Even with improving his record to 12-1 and putting some money in the bank, “Mayday” will be back in the cage only two months after the Figueroa fight. At UFC 130, McDonald’s next match-up is a familiar face to him, fellow Californian Chris “Kamikaze” Cariaso. Originally, McDonald was targeted again to fight Pace in August, but was offered to bump up to the Memorial Day weekend event. After an enthusiastic phone call from a close friend and a moment of reflection while praying, McDonald was ready to say yes for his second UFC appearance.

“I've been looking at Chris Cariaso for a long time, ever since he beat my teammate [Rolando Velesco] and I think I can beat the guy. He is definitely a good fighter. Personally, the fight he beat my teammate in was I think the best performance of his career. He's a good guy. I've talked to him quite a bit. He's from the Bay Area and I'm from the Central Valley. He's got good stand-up and he's well-rounded.”

To prepare for this fight, McDonald is training with the same team that got him to the big show: Last Stand Fight Team of Oakdale, CA. It’s a tight knit group featuring McDonald’s brothers, Justin Smitley and Brad McDonald, his best friend/wrestling coach Jordan Keckler, and all coordinated under the watchful eye of “Professor” Tom Theofanopoulos.

As sweet as the “Fight of the Night” was in retrospect, none of them are rooting for a repeat banger and would prefer McDonald to get a quick finish like his previous 11 stoppage wins. “I'd like to go in there, win, be safe and get out without any injuries,” says McDonald. However the fight goes, he is confident in himself through his faith. “I like to get in there and get out very quick. But I'm not one to question what God's plan for this is. This career is God's project for me and whatever he does with it I'm just a vessel in which he does it by.”

On May 28th in Las Vegas at the MGM Grand Garden Arena, the UFC’s youngest and, possibly, brightest bantamweight star will take to the cage to avenge a loss for a teammate against the 11-2 “Kamikaze” Cariaso. Whether it is 15 minutes of non-stop action, a first round flurry KO, or a slick second round submission, “Mayday” will dig in and fight every step of the way. The impressive “Fight of the Night” performance wasn’t McDonald’s curtain call, it was just a glimpse of things to come.