Women's Flyweight Star Firing On All Cylinders As A Member Of Team Alpha Male
By Gavin Porter, on Twitter: @PorterUFCnews • Apr. 21, 2022

Every so often, a young, talented fighter finds themselves in the UFC with little experience and plenty of hype. That’s the position that Maycee Barber was in back in 2018.

At just 19 years old, Barber burst onto the scene by way of Dana White’s Contender Series. She would go on to rip off three straight knockout wins in a calendar year and justify her well-chosen moniker, “The Future”.

Barber’s goal to become the youngest champion in UFC history was no secret, and she was well on her way to the top before running into longtime contender Roxanne Modafferi at UFC 246. Barber suffered a major knee injury in the loss to Modafferi and was forced to sit on the sidelines for over a year before returning to action.

Her return fight wouldn’t go as planned, as she dropped a decision to rising flyweight Alexa Grasso. Even though she lost the bout, there was an important moment in that fight for Barber. Down two rounds to nil, she entered the third round with a different mentality and put Grasso on the ropes for the full five minutes.

That third round made her realize that even though she was confident – she didn’t truly feel confident. That was what she was missing, and she had to do everything she could to find that before the next time she was set to scrap.

“My last few fights I was trying to put on that ‘I’m confident, I’m ready face’,” Barber told UFC.com. “And in my mind, I was scrambled all over the place and I was dealing with a lot.”

That’s when Barber made the switch to go out to Sacramento, CA, and train at Team Alpha Male. Under the guidance of Urijah Faber and his stable of coaches, she was able to make some key mental switches that completely changed the way she feels about competing. 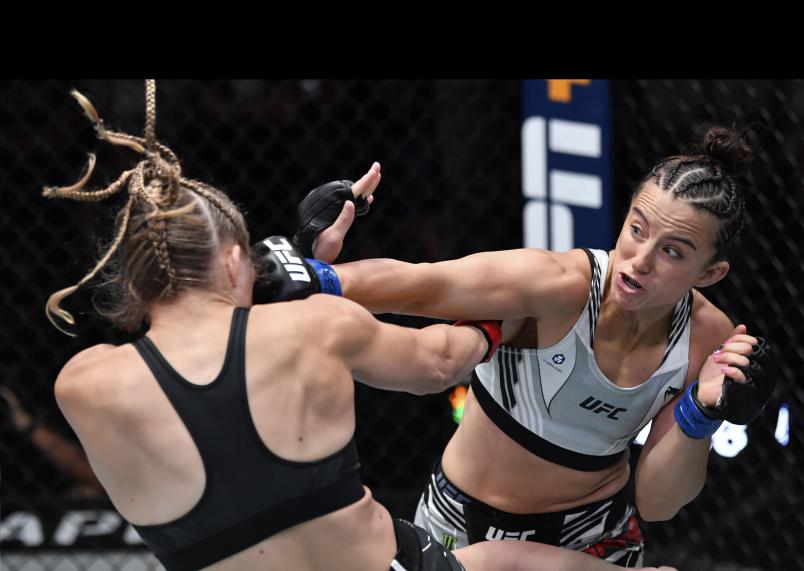 The biggest lesson that Barber had to grasp had to do with transforming her confidence into something that wasn’t for anyone but herself.

“It’s a confidence but it’s also a maturity. I’ve definitely learned the importance of true confidence, not just a facade of confidence,” Barber said. “It’s not just, ‘Oh, I’m confident; I’m going to tell you I’m confident,’ it’s, ‘I’m confident and I believe it.’ I feel it in my heart.”

Tapping into those lessons and the advice from her coaches helped Barber win a close fight with Miranda Maverick. It was a tough, back-and-forth battle, but when Barber was faced with adversity, her confidence didn’t waver and she was able to get the win.

A post shared by Maycee "The Future" Barber (@mayceebarber)

Barber isn’t one to mince words; she knows stopping her two-fight skid was critical and puts her back in position to start that climb up the rankings in 2022. Her first opportunity comes against Montana De La Rosa at UFC Fight Night: Andrade vs Lemos this weekend.

De La Rosa made a statement her last time out, finishing Ariane Lipski and setting up this bout with Barber. The matchup is one that Barber has had circled for a while, and she believes she’s going to put on one of her best performances to date against De La Rosa.

“I feel like it started from the time we signed the contract. It’s been a war ever since then. I’ve been dominating mentally and physically in training and everywhere, and I know I’m going to be able to break her,” Barber said. “She doesn’t like to get hit; she’s definitely a breakable girl and that’s what the plan is.