"I just want to keep a high pace and finish people. I'm going to prove to everyone that Max Holloway should be one of the feared strikers of the featherweight division." - Max Holloway 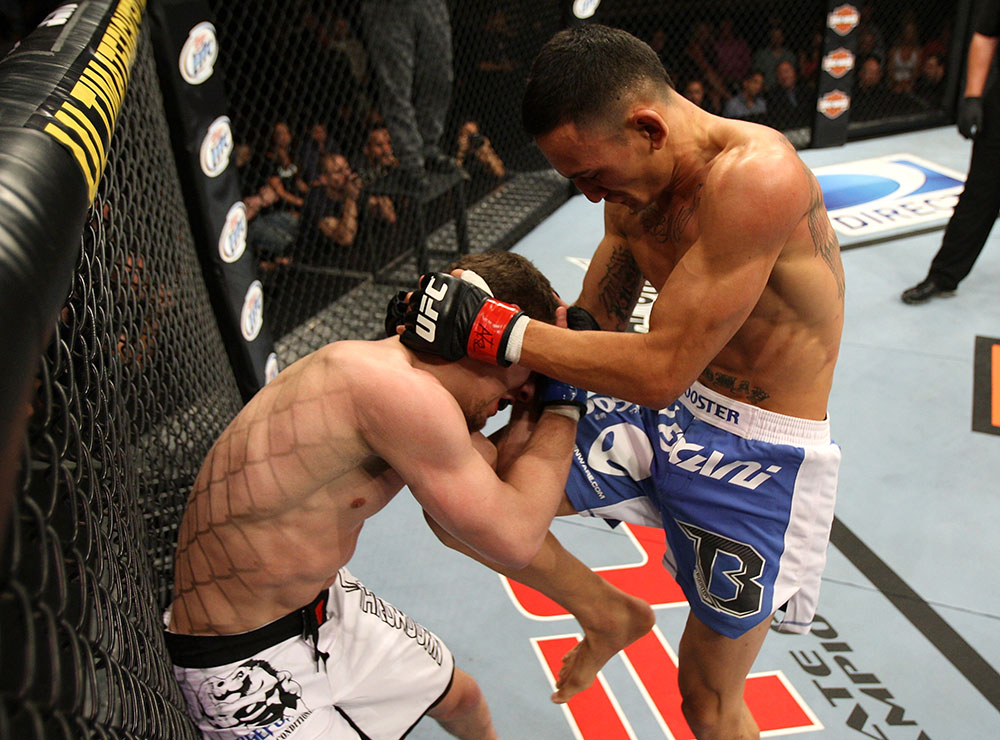 At 16 years old, most American teenagers are learning how to drive, but one particular Hawaiian started to train in kickboxing. In two years, he smashed his way through the amateur ranks, and turned pro at 18. A year later, he was 4-0 in the cage, being sought out by UFC talent to be a training partner, and highly touted on the internet as a top prospect for a major MMA organization. Now, at the ripe age of 20 years old, this born brawler nicknamed “Blessed” scored his first victory inside the Octagon after putting on a masterful striking clinic at The Ultimate Fighter 15 finale.

In short, Max Holloway is a lightning quick study of the standup game, and he won’t stop his assaulting apprenticeship until he’s considered one of the best at it.

“I try to compare myself all day to other strikers,” explains Holloway. “I like watching Erik Koch and Anthony Pettis. I like watching their highlight videos. I pick stuff from their style. Jose Aldo, Anderson Silva, and Renan Barao's highlight videos. I would like to get myself to where the fans and the UFC see me as dangerous as them one day. I want to be known like how they're known – as the best strikers in their division.”

These Youtube sessions are not for sheer entertainment, but used for inspiration, as Holloway has been known to take what he’s seen on the small screen and put it to use in the cage. “That elbow was thanks to Urijah Faber and Anderson Silva,” tells Holloway who peppered Strikeforce veteran Harris Sarmiento with the unconventional elbow strike, first made famous by UFC middleweight champion Anderson Silva in his knockout over Tony Fryklund, after hurting his hands in the opening round of that March 2011 bout. “That back uppercut elbow? Nobody seems to block that. They're thinking, 'he's not going to punch me' and, boom, you throw that elbow and you surprise them.”

The Oahu native showed off every bit of his nearly never-ending arsenal of strikes in his second UFC featherweight appearance in June against Pat Schilling. The bout was a polar opposite to Holloway’s first round debut loss to Dustin “The Diamond” Poirier at UFC 143. Where once he looked frantic and reckless, Holloway was now composed, calculated, and crushing. For 15 minutes, he dissected Schilling from legs to head with punches, kicks, knees, and elbows, and when it was over, Holloway’s hand was happily raised.

“I was aiming for a big win,” says Holloway. “I was telling myself if I lose this fight, I will lose my job. I knew what to expect this time. It was a little smaller event than UFC 143. But I had been there already. I was calm, cool, and relaxed all week, so I felt great for that fight. I would have loved to get the finish. I thought it would be a little closer fight. I'm glad it came out the way it did - a dominant fight. We trained for three fives. I was training hard. I was thinking that I have to end this guy because I don't want to end up in a decision. I was training for a finish the whole fight camp. It wasn't really what I expected and I really wanted a finish, but I'll take a dominant win any day.”

Even for a novice judge, Holloway made it easy by landing over 100 significant strikes and stuffing every single one of the near 20 takedown attempts Schilling offered. While his opponent was certainly conscious throughout the battering, Holloway dealt most of the punishment to Schilling’s body. If there was any question to be raised after the across the board 30-27, one-sided affair: why was there not a single 10-8 round given? The often quoted phrase from UFC President Dana White “don’t leave it in the hands of the judges” still seems apropos, even though they scored that Holloway won, but not by enough of a margin.

“It's what Dana White says,” affirms Holloway. “It's kind of weird, the judges’ rating system. I don't know how they judge. I really do believe judges should look into giving people points or half points for defending takedowns to favor the strikers who do that. I believe defending a takedown is just like getting a takedown. But we get no glory for it. You hear commentators say 'great takedown defense'. You can beat a guy on the feet for four minutes, but if he takes you down in the last minute and ground and pounds a little bit then he wins the round? I don't really know about the judges’ score, I was just happy I came out the victor.”

Up next for Holloway’s hitting hostility is an August 11th date with the Knockout of the Night and Fight of the Night winner at the TUF 15 finale: Justin Lawrence. While Holloway’s kickboxing acumen dates back only a few years, Lawrence has been throwing hook-kicks and roundhouses since he was six, while being trained at his stepfather Benny Voyles’ gym in St. Louis, Missouri. Besides a 4-0 pro MMA record, which includes the multiple bonus fetching KO kick win over fellow TUF alum John Cofer, Lawrence has a lengthy list of amateur kickboxing and boxing titles and spent time training at BlackHouse MMA with the likes of “The Spider” Silva. This might all be intimidating for some, but for Holloway it is the opportunity of a lifetime to test his striking skills.

“I got the call not too long after my fight - about two weeks,” discloses Holloway. “They gave me the name 'Justin Lawrence' and I was excited. Great guy. This guy is like me - he likes to stand and bang. We don't need to do none of this wrestling or grappling stuff. They're always talking about his striking. I want to put his hype to the test. Come August 11th, let's see who comes out and is the better striker. It should be a fun fight for the fans.”

On paper, these 145-pounders should scrap standing with neither sniffing for a takedown. Not that Lawrence doesn’t have a cache of creative kicks of his own, but “The American Kidd” will look to use his technique and power to beat Holloway. On the other side, Holloway is relentless with punches in bunches and has a penchant for punctuating combinations with flying knees. If you’ve seen him fight, it’s obvious why UFC lightweight Jeremy Stephens brought Holloway into his training camp to act as Anthony “Showtime” Pettis. It’s that rare ability for an air assault that Holloway has, like Pettis, where improvisation meets an opponent’s chin for demolishing results.

“My striking, I don't really have that one knockout punch, so I tag you and keep tagging you until I catch you with one you don't see or you just give up,” asserts Holloway. “He's more of a power guy. It's going to be pretty much speed versus power in this one. On the feet, I feel so comfortable there. I feel like nobody can beat me. That's my confidence and that's the type of confidence I think you need to be successful in this sport. That's the mindset you need.”

In preparation for Lawrence, Holloway is busy training with the fight team at Gracie Technics in Honolulu. Holloway’s MMA maturation is carefully guided by Gracie Jiu-Jitsu Black Belt under Professor Pedro Sauer, wildly accomplished local grappler, and owner/operator of the Gracie Technics gym, Rylan Lizares. The steady hand keeping Holloway’s punches and kicks fast and crisp is 7-0 featherweight Dustin Kimura. What was readily apparent in the win over Schilling is that Holloway is beginning to understand how to use the length of his 5-11 frame to his advantage when striking.

This Saturday, two trained kickboxers will seek a highlight reel knockout to the delight of the Octagon audience. “The fans should expect a standup war,” states Holloway, whose goal to have his name read along with the Aldos and Silvas of the world starts through winning a striker’s duel with Lawrence. “I can keep a high intensity and I know how to stick and move now. I just want to keep a high pace and finish people. I'm going to prove to everyone that Max Holloway should be one of the feared strikers of the featherweight division.”