Max Holloway: No Time to Smell the Roses 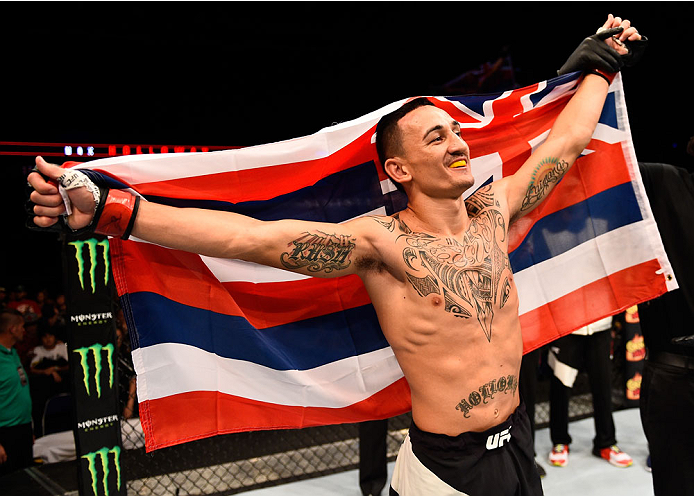 “You’ve got to keep it together,” he said. “Too many people start looking to the future and then they start stumbling in the present. I don’t want to be one of those guys who is sitting around on December 13th wondering what just happened, and in a bad way. I’ve got to focus.”

That means all the fifth-ranked featherweight contender is thinking about is what happens on December 12 when he faces Jeremy Stephens in a UFC 194 main card bout. December 13? He’ll worry about Sunday when Sunday arrives.

“What I say to everyone is that it’s one step at a time,” Holloway said. “I’ve got Jeremy Stephens and he’s got all my focus, and on December 12th I’ve gotta go get business done, and then we can talk potential fights after that.”

With that top five ranking and a seven-fight win streak under his belt, Holloway’s potential fights could include any of the four men also battling it out in high-profile featherweight bouts this weekend in Las Vegas. From Jose Aldo to Frankie Edgar, Conor McGregor to Chad Mendes, all would appeal to fight fans and to the pride of Waianae, Hawaii, but the mature 24-year-old has a firm grip on the reality that if he doesn’t beat Stephens, it will be a step backward, not forward to end 2015 and start 2016.

“I’ve got to try to make a statement and try to stick out,” he said. “That’s a big fight week, so I’ve got to try and state my case and we’ll see what happens. At the end of the day, it’s whatever the UFC wants to do, so until I get a contract, it doesn’t really matter.”

If you’re wondering how Holloway got so practical, he chalks it up to a reality that may seem harsh to some, but that he won’t get surprised by.

“In the UFC, you can be here one day, and the next day, it’s bye,” he said. “That’s how this game is. So you’ve got to stay focused, you’ve got to stay grounded, and some people get caught up in their own hype, and I don’t want to be one of those guys. You see it all the time – they’re on this mountain and then they get pushed off the mountain, and now they’re on a little sand mountain. It is hard, but I know what I want to do, and when my career’s done, I want to be remembered as one of the greatest of all-time. I can sit back and enjoy all my success when I’m done fighting and talking to my grandkids or my kids. Then I can appreciate it. Right now, there’s no time for appreciating anything. You’ve got to go out there and put in hard work.”

This mindset may be a bigger key to Holloway’s success than any of his substantial talents in the Octagon. Sure, he has been impressive in soaring up the featherweight ladder, but it was his darkest professional hour that spurred him on.

“There was that one point where I came off back-to-back losses in that one year, and then I was fighting that newcomer,” said Holloway of a 2013 campaign that saw him drop bouts to Dennis Bermudez and Conor McGregor. Those defeats left Holloway at 3-3 in the UFC heading into a January 2014 bout against UFC rookie Will Chope.

“Usually when you’re fighting a newcomer and you’re coming off of two losses, you lose and you get your papers,” he said. “That feeling haunts me and I don’t ever want to feel that again. So I use it as motivation to keep me grounded and keep me focused. Anything can happen. So I focus on now and take one step at a time and cover all my bases.”

Holloway stopped Chope in two rounds, picked up a Knockout of the Night bonus, and he hasn’t lost yet. Along the way, he’s become one of his division’s most popular fighters, not just for his fight night performances, but for his accessibility outside the Octagon as well. What does he chalk this popularity up to?

“I don’t know,” he said. “I think they can see that I’m human. When I see fans shaking, I talk to them and tell them ‘what are you nervous for? You can stab me and I’ll bleed just like you.’ I’m so easygoing, and when it comes time to put myself in that corner, I do, but I try to be as positive as I can, and I try to talk life into people. You don’t know how someone’s day is going. Maybe it’s going bad and that person doesn’t want to be in this world, and a simple smile or wave can change their mood. That’s the person I want to be. Some people get success and they just think they’re better than everyone. It blows my mind because we’re all human and we all end up the same way.”

Holloway has a lot of wisdom for only 24 years on this Earth, though you won’t hear him saying anything like that or patting himself on his back. He’ll likely just say he’s had a few good breaks.

“I was just telling my wife that I don’t know what I would do if I didn’t have fighting,” he said. “A lot of people think that’s crazy, but I make good money, I make a good living, and not many people can say that they did what I did, and what I’m doing, at my age. It’s like anything else; it has its ups and downs, but why focus on the negative? I’m all about counting my blessings and I’m a cup half full kind of guy. That’s the way you have to approach life.”