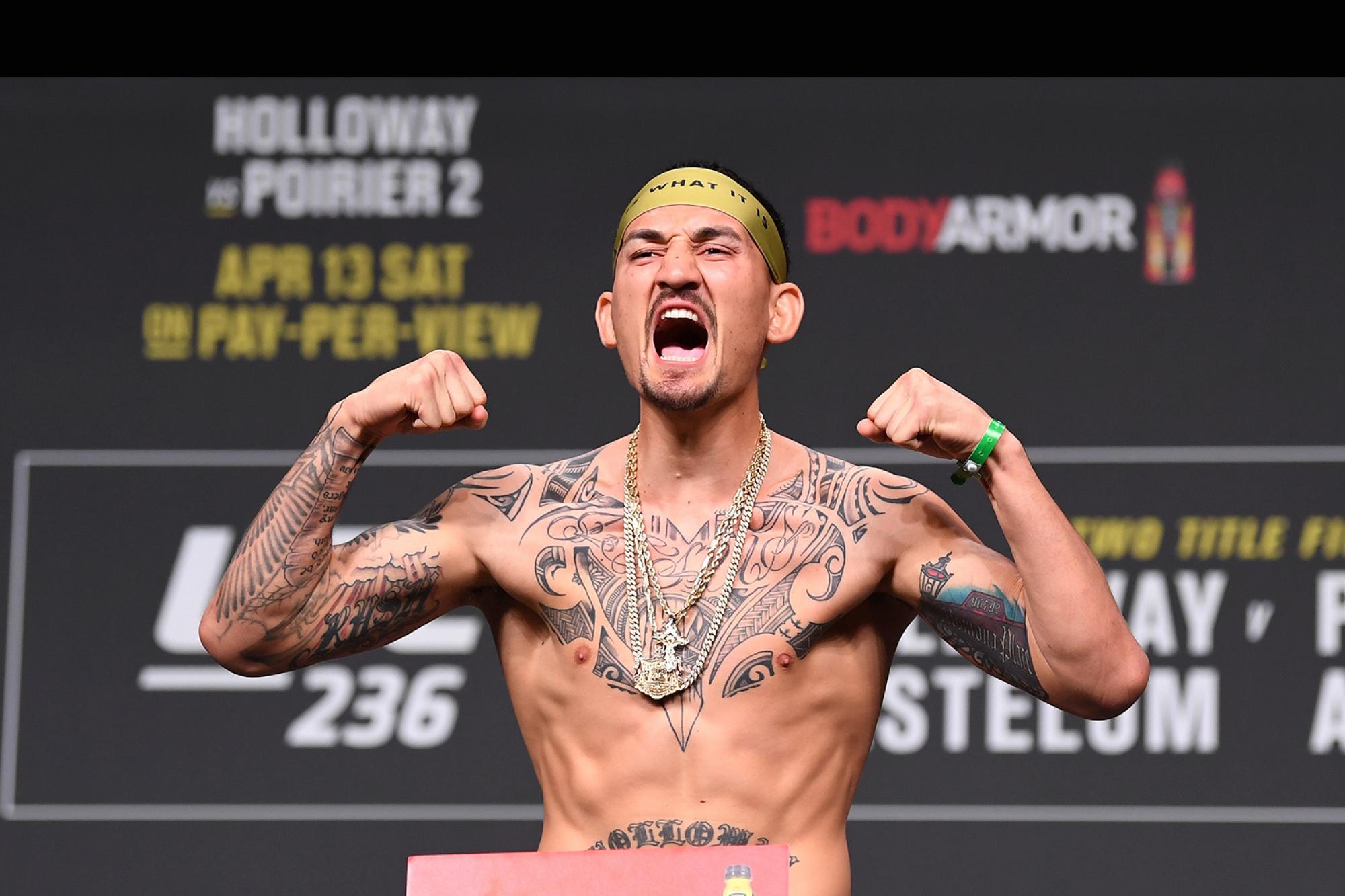 Max Holloway Isn't About Having Equals

Max Holloway silenced doubters after his impressive win at UFC 231. Now, all he cares about is building his legacy toward becoming the best pound-for-pound fighter.
By Thomas Gerbasi • Apr. 12, 2019

Max Holloway wasn’t always a fighter. But as he explains, the first time he put his fists up, it was a result UFC fans have become used to.

“Eighth grade, I remember it like yesterday,” he laughs. “My brother fought at recess. The bell rang and he tackled the boy twice, like picked him up and slammed him. We went to class, then one of the boys behind us was saying, ‘Your brother’s a bleep, he’s bleep bleep, who tackles in a fight?’ And I told him, ‘Say one more thing about my brother and I’m gonna turn around and punch you in the face.’

“And I turned around and punched him right in the face. And then we looked at each other oddly for two minutes. That was the longest two minutes of my life. (Laughs) I could see out the corner of my eye the PE teacher walking to us, laughing, and I’m just bouncing around, thinking, ‘Man, I’m getting tired.’ Then they stopped it. I landed the only punch. I guess you can say that I’m 1-0 on the streets.”

Holloway is in a good mood these days, and why wouldn’t he be. The featherweight champion of the world is in the UFC 236 main event in Atlanta, facing Dustin Poirier for the interim lightweight belt, and the hard work is over. He made weight, it’s time to fight, and he gets the chance to add another belt to his collection. So yeah, he’s still feeling the same excitement.

“Oh yeah, every time,” Holloway said. “I finally get to punch somebody in the face and not feel bad for a couple minutes. After the fight, of course, you feel terrible, but going in there, you’re not feeling bad. I got teammates and coaches that I’m hitting during training camp, like ‘Aw man, I’m sorry.’ But when you go in there, it’s that same excitement. There’s hours and hours and hours that go into this that no one sees. At most, people get to see me for 25 minutes at most. That’s so little compared to the hours that I gotta put inside the gym.”

Frankly, it’s good to hear Holloway laughing, joking and generally feeling good about fighting, because that wasn’t necessarily the case before his UFC 231 bout against Brian Ortega in December. Returning for the first time in a year, Holloway had a hellish 2018 filled with injuries, canceled fights, and even a bout of depression. When it was announced that he was coming back to face the unbeaten Ortega, many wondered whether this was a changing of the guard at 145 pounds, with Holloway’s best days behind him. Shocking for a young man turning 27, but there was questions to be answered. It brought up memories of the first Evander Holyfield-Mike Tyson bout, when many feared for Holyfield’s safety against “Iron Mike.”

But then came fight night and Holyfield shocked the world. On December 8 in Toronto, Holloway did the same, putting on a master class in stopping Ortega in four rounds. Now “Blessed” has had big wins over the years, but was this the most satisfying?

“It was great, especially with how I started the year,” said Holloway. “You guys all heard about the fights, the fall-throughs, the depression and all that. But I’m a strong believer that it’s not how you start the race but how you finish, and we finished pretty strong and it was just a great win. To have all that, to have them saying this guy was gonna be my equal and be able to go out there and show the world what I’m capable of and why I’m one of the best pound-for-pound fighters in the world, it was just great to do.”

Yet despite silencing all the doubts, Holloway wasn’t going to say, “I told you so.” He wanted his actions to speak for him, and those actions shouted that a fighter with a 12-fight winning streak (now 13) and a world championship should never be underestimated.

Will Max Holloway become a double-champ? Order UFC 236 on ESPN+ to find out!

“I just wanted to show the world,” he said. “Going into that fight week, the thing that really confused me was how they were trying to sell the fight as an up and coming lion versus the vet. I was younger than the dude. (Laughs) We were the same age fight week. He’s been 27, I had just turned 27. But in this sport, you’ve got to keep fighting and reminding people. The more often you fight, the more people are like, ‘Okay, yeah.’ So after having that year, I understand why people doubt. But I knew what I was capable of doing. I knew what I was going to do out there, and it was time to show you guys. They were telling me this and that and this guy was gonna be my equal, and I was just like, I ain’t about that. I ain’t about having an equal. I’m about going out there and making you guys scratch your head after the fight. And that’s what I wanted to do.”

Mission accomplished. Now it’s on to the next task, bringing “The Blessed Era” to 155 pounds, and he’s confident that it’s going to be a good one.

“I see a lot of differences,” Holloway said of the move to lightweight. “I saw a lot of differences in the weight room; I was able to move a little bit more weight. My training partners and coaches were saying I feel different and have a little bit more pop in some punches. With my grappling, some people were telling me I felt real healthy, so whenever they say that kind of stuff, it’s good to hear. It’s going to be amazing.”

Even better than being unbeaten as a streetfighter.