"The big difference is that I know what to expect now." - Max Holloway 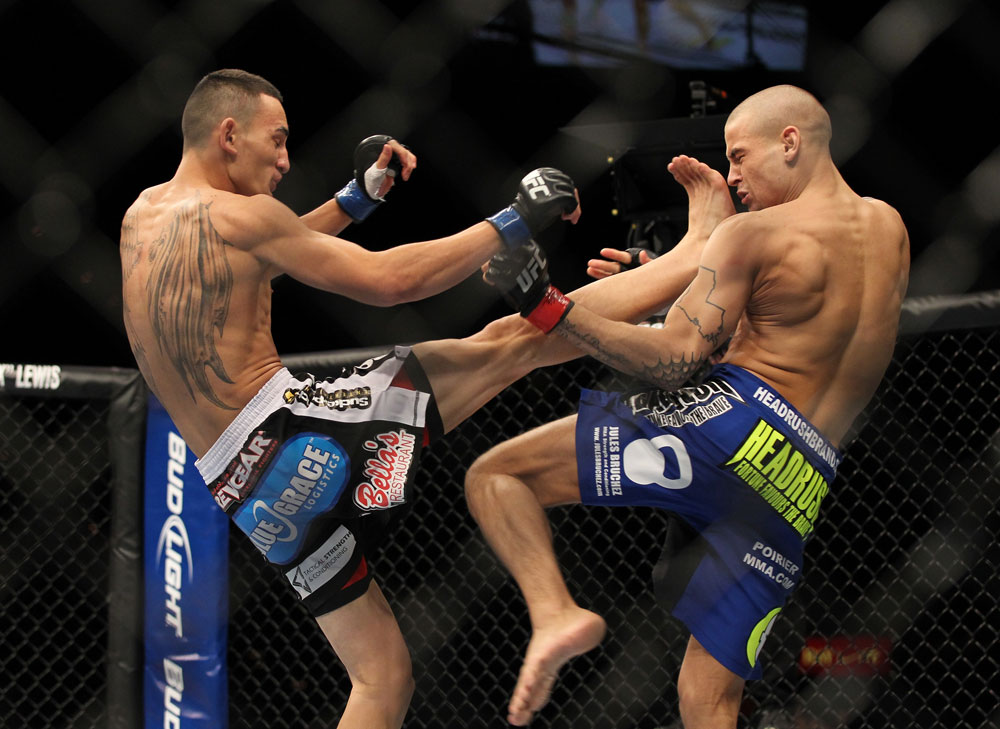 At 20 years old, Max Holloway isn’t just the youngest fighter currently competing in the UFC; he’s also a father and husband. So you’ve got to excuse him if he didn’t know too much about Dustin Poirier when he got a call from his manager, informing him that he was going to be facing the featherweight contender in his UFC debut in February.

But there was a catch.

“‘The catch is that it’s at ’45 and it’s against Poirier,’” the manager told Holloway, who had previously competed at lightweight. But he didn’t care. This was the UFC, and he was going to fight this Poirier guy, no matter who he was.

“At the time, no disrespect to Poirier, but I didn’t really know who he was at the time just because I wasn’t really following the featherweights in the UFC or even the WEC,” he said. “The only guys I knew were the ones fighting for the title, like Jose Aldo.”

Then he investigated his new opponent and found out that Poirier wasn’t a prospect on the way up like he was. The Louisianan was a seasoned vet on his way to a title shot. It still didn’t matter to Holloway.

“I didn’t once question myself. I instantly thought, ‘wow, I could be in the top ten after this fight.’”

With an attitude like that, you can probably guess where Max Holloway calls home. Yes, he’s from Hawaii, and if you’ve ever dealt with someone from the island, you’ll know that there are fighters and there are Hawaiian fighters.

“The mindset of a lot of the Hawaiian guys, and my mindset, is that we just want to be the best, and the saying is to be the best, you’ve got to beat the best, and that’s just what I plan on doing,” said Holloway, who didn’t beat Poirier at UFC 143 in Las Vegas, getting submitted in the first round, but he did come to fight, earning a measure of respect and a call back for a main card fight this Friday against Pat Schilling.

“My confidence is still high after that fight,” said Holloway, now 4-1. “I think I proved that I could stand with a pretty high ranked guy in the striking area, and now we’ve got to just touch up my ground. The big difference is that I know what to expect now. The first fight, going against a guy like Poirier, who was ranked four or five in the world at the time, my eyes went big and I got that fight. I was like ‘oh man, I’m in the UFC,’ and everything was ‘let’s go, let’s go, let’s go.’ Even when I fought him, you could probably see that my gas pedal was down and I was going like 120 in there. This time, I’m feeling more relaxed, I know how the energy’s gonna feel now, so hopefully there will be a better outcome.”

That’s not the maturity you expect from a typical 20-year old, but Holloway sets the bar high when it comes to that department. And while marriage and fatherhood will undoubtedly speed up the maturing process, he also looks to his faith to keep him grounded.

“I believe in the man above, and he won’t put anything on your table that you won’t be able to handle, so I feel like with him leading the way that everything is possible,” said Holloway. “It (his faith) keeps me leveled. Some people hit fame and they just go crazy with it. They lose control and they lose their mind and they can’t focus anymore. I like to think I’m just another guy pursuing his dream.”

Holloway didn’t even participate in what was apparently the recreational sport of the majority of Hawaiian fighters, a little scrapping on the side while growing up.

“The side I’m from in Oahu, the Westside, we’re kinda looked down on by the community because every day there’s a fight in school and all that kind of stuff, but to be honest, I wasn’t really a fighter growing up,” he said. “I was the shy kid. My younger brother was the fighter; he was always fighting in school and stuff. I only got into one fight, in eighth grade, and after that I kinda had a clean slate.”

His extended family didn’t even believe him when he said he had started fighting, assuming it was his younger brother who had put on the gloves. But don’t mistake Holloway’s calm demeanor outside the Octagon for weakness inside it. He’s a fighter, and he sees his UFC career as a way to make a better life for his young family.

“You gotta grow up fast where I’m from,” he said. “You see things at a young age that most young people don’t see. I didn’t have a rough life growing up, but I saw what certain things did to certain people, and I always wanted to better myself.”

Now he’s in the UFC, and he knows what’s on the line this Friday.

“I’m 20 and I want to keep my job,” said Holloway. “I’m here to make fights happen and I’m here to make a big statement against Pat Schilling. I’m not taking nothing away from him, but I know that if I can beat him in a good fashion, it would be good for my career.”