Max Holloway Gears Up for a Ninja Fight 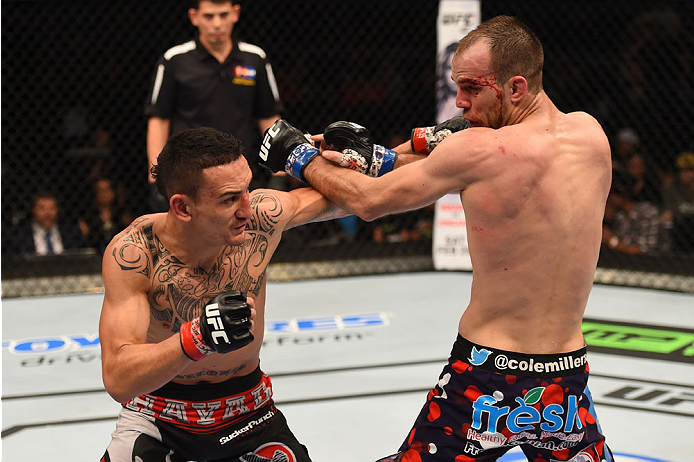 These are the tenants of UFC featherweight Max Holloway’s rise to top 10 status. After suffering back-to-back losses for the first time in his young career, the fighting Hawaiian has rattled off five straight wins inside the Octagon, including four finishes with two bonuses in 2014 alone. Success for Holloway has been about staying focused, on pushing forward while he leaves a trail of defeated opponents behind him.

“You have to keep a level head,” Holloway said. “You see guys in this sport who do great things, but then they get a big head and they start to think they’re immortal, untouchable. All the things I did last year were great, all the things I did in my last fight were great, but the only fight that matters is the next one. I have to stay the same levelheaded Max Holloway and take one step at a time and climb the ladder and keep trying to set records. I’m here. I’m here to stay. And when it is said and done, I want to be known as one of the best.”

At only 23 years old, “Blessed” nabbed his eighth and most recent UFC victory in February with a unanimous decision win over Cole Miller. The co-main event clash saw Holloway outstrike the rangy Ultimate Fighter 5 alum nearly 2 to 1 in significant strikes landed and shed all of the BJJ black belt’s takedown attempts. While not a stoppage win like his previous four, Holloway showed a lot of maturity in his outclassing of a dangerous veteran and he kept his street cred up by landing a solid spinning backfist.

“I think I did well, but there is always room for improvement,” he said. “Every fight I go out there, I look for the finish. Cole Miller is a very game opponent and he hadn’t been finished in a while. That was on my ‘to do’ list. I didn’t get the finish, but I got the win. I have to respect the man. A lot of guys, they go in there and say, ‘Cole is a jiu-jitsu guy’ and then they get whacked with his right hand, they fall down and he submits them. I had to respect that about Cole Miller. My game plan was to stick and move, walk him down and try to get the finish.”

Just like his ascension up the ranks, Holloway has learned that the key to finishes is about keeping that even-keel inside the Octagon and not trying to force something to happen. Like most of the UFC’s Hawaiian invasion, he is a proud member of Rylan Lizares’ Gracie Technics alongside Oahu natives Yancy Medeiros, Russell Doane and Louis Smolka, just to name a few. With the help of head coach Lizares and striking coaches Ivan Flores and Charles Kipilii Jr.,  Holloway has seen the merits of quality over quantity in his stand-up, while still being able to bust out flying knees.

“In my fights before I was with Gracie Technics, I was just a kid and I knew one speed - 200 mph,” Holloway said. “I would come at you, throw everything I had at you, from the beginning to the end. I learned that that wasn’t good, and I learned that the hard way against Dustin Poirier. I came in at 200 mph and I got taken down and submitted. Now, with Rylan and Gracie Technics, they have made me see opportunities instead of forcing them. Let the finish the come. Just keep working and when the finish is there - take it.”

Up next, Blessed will take on arguably his toughest test to date in a main card collision with Mr. “Beautiful Destruction” himself - Cub Swanson - at UFC on FOX: Machida vs. Rockhold. Prior to his most recent loss to Frankie Edgar in November, the Team Jackson stalwart was on an incredible six-fight win streak inside the Octagon, including four KOs and four bonuses. Currently the #5 ranked featherweight, Swanson is unequivocally one of the division’s best, with a penchant for delivering intense, fan-friendly fights.

“Cub is an animal,” Holloway said. “He’s the highest-ranked guy I’ve fought, but I have to go in there and do what Max Holloway has been doing and fight my fight and stick to my game plan. When the 15 minutes are done, hopefully, I get my hand raised. I just can’t wait to go in there and mix it up. I think with both of our styles it could make for a Fight of the Year.”

Besides tangling physically with one of the best fighters in Swanson, Holloway will need to grapple with the mental struggle of punching one of his MMA idols. With an eight-year age gap, Swanson was fighting in the WEC while Holloway was in high school and a fan of the sport, watching his future opponent compete on TV. The hurdle of not getting star struck by one’s adversary is something that Holloway has dealt with and overcome before in his decision win over Leonard Garcia at UFC 155.

“I used to watch Cub in the WEC when I was growing up,” Holloway said. “I watched him a lot. It’s kind of crazy. It’s kind of like the Leonard Garcia fight. When I fought Leonard, I was tripping out that I was in the same cage as him. You watch these guys for years and, now, I get to share the same Octagon as them. It’s a privilege and an honor. It was a crazy feeling looking at Leonard from across the cage. I have already had that first fight with Leonard where I fought one of the guys I had watched for years, so when I go in there with Cub, it’s game time.”

This Saturday in Newark, New Jersey, two highlight reel-ready featherweights will throw down as Holloway meets Swanson. “You’re going to see some awesome stuff in this fight.” Holloway said. “I like to look at myself and think I have some cool ninja moves and I think he has some cool ninja moves, so it’s going to be a ninja fight.”