"I plan on making a run this year and hopefully getting in the top ten, and I’ll work my way up from there." - Max Holloway 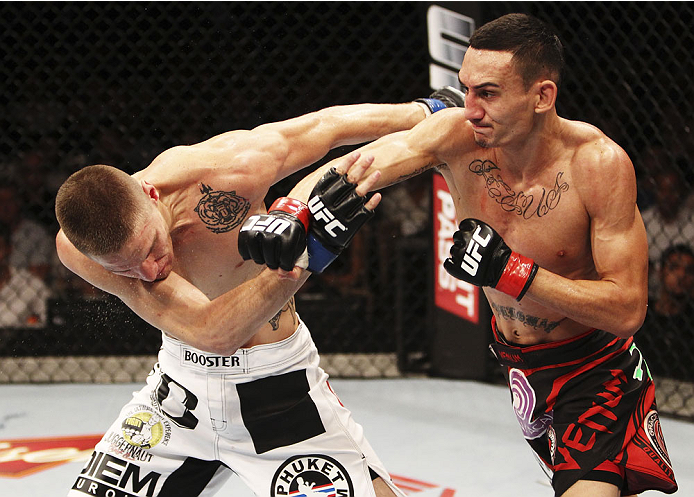 It’s been said that some athletes have grown up in public. Few have done it better than Max Holloway. 8-3 as a pro, the Hawaiian standout has already fought seven times in the UFC, an impressive run any way you cut it, but one made even more so when you consider that this seasoned veteran of the Octagon is still only 22 years old.

So as a fighter who is no longer the youngest on the roster, but seventh on the list, Holloway is the perfect person to give advice to those who once stood where he did.

“The advice I would give would be go out there, take your time, and fight to your abilities,” he said. “Don’t let the crowd and noise and whatever get to you, and don’t leave it up to the judges. Like (UFC site coordinator) Burt Watson always says, ‘they’ll only make you cry.’”

It’s great advice, and some of it was even given to Holloway before he faced Dustin Poirier in his Octagon debut back in 2012. But being 20, the Waianae product didn’t necessarily think he needed it.

“People told me about the big lights and this and that, but it was hard to listen to them,” he admits. “Being so young, you think ‘I’ve got this. Don’t worry, it’s not going to affect me.’ But once you get there, it’s a whole different story.”

Holloway would lose that first fight to Poirier, but three straight wins over Pat Schilling, Justin Lawrence, and Leonard Garcia followed. Then he hit a roadblock in the form of defeats against Dennis Bermudez and Conor McGregor, and as he approached his January bout against newcomer Will Chope, he was facing a possibility he didn’t necessarily want to consider.

“I felt a lot of pressure,” he said. “It doesn’t go too well when you see guys on losing streaks and then they get a guy making his debut and then they lose. The next article you probably see is that they’re getting let go from the UFC. So I had a lot of pressure on me, so I just wanted to slow things down a bit and get back to my roots.”

It was the night Holloway grew up as a fighter. Taking his time and picking his shots, “Blessed” was sharp from the opening bell until he stopped the 6-foot-4 Chope at 2:27 of the second round, earning his first Knockout of the Night bonus. And if winning his own fight was nice, seeing his buddies from Hawaii – Dustin Kimura and Russell Doane – also pick up victories was even better. Forget Hawaii-Five-O; this was Hawaii 3-0.

“It was awesome,” said Holloway. “We were truly blessed to have that experience. At the time we were all training together. Russell Doane crosstrained with us and Dustin Kimura’s my main training partner, so it was a great feeling. Now Russell is one of our main training partners too. So being from Hawaii and having a bunch of us in the UFC now and all being able to train with each other, it’s crazy and you never really hear of this happening anywhere else in Hawaii.”

It has made the 50th state one of the sport’s hotbeds, with Holloway, Kimura, and Doane joined in the UFC by Louis Smolka, Yancy Medeiros, and the Godfather himself, BJ Penn. Few states can boast such a lineup.

“It created a lot of excitement, and I feel like we’re opening doors for our up and coming guys in MMA, and a lot of people are opening their eyes,” said Holloway. “Hawaii is getting the respect we deserve now and we’re getting some extra Hawaiians on the map and trying to prove that we can hang up there with the best of them.”

“I definitely get excited,” he said. “The UFC wants to see fights that the people want to watch, and a lot of people want to see this fight. Once this fight got announced, my Twitter was going off. I think this is the most anybody ever wanted to see me fight. (Laughs) So hopefully we live up to the hype and we can deliver to the fans.”

Holloway always does, and after going from the chopping block to the main card, he’s ready to start making his move northward.

“I plan on making a run this year and hopefully getting in the top ten, and I’ll work my way up from there,” he said. “I don’t care too much about the rankings because I believe some people don’t belong there, but it is what it is, and in two to three years, I want my title shot.”