Max Holloway: A Diamond in 'Paradise' 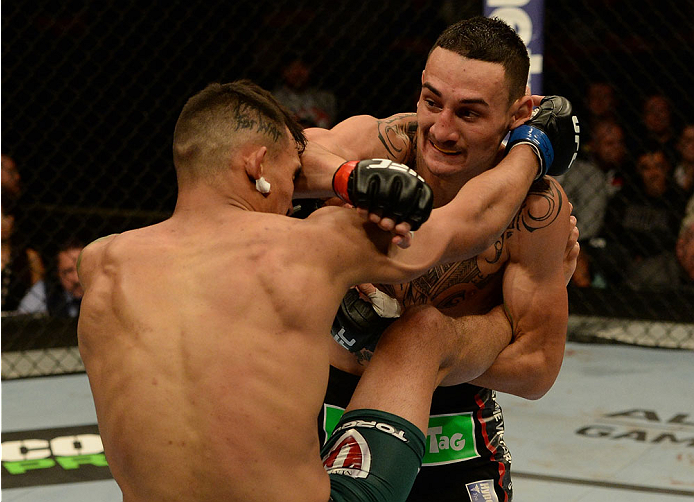 Max “Blessed” Holloway was once the youngest fighter in the UFC ranks, and his first fight in the Octagon was a test of two young talents, when he faced Dustin “The Diamond” Poirier in February 2012.

“That fight made me the fighter that I am today,” says Holloway, who lost via mounted triangle / armbar to give Poirier his fifth win in a row in the UFC featherweight division. “I learned how to be a man and how to take a loss like a man, but also how much harder I have to train if I want to compete in the UFC. So I wouldn't change anything about that Poirier fight. At all."

Holloway faces Clay Collard at UFC Fight Night: Henderson vs Dos Anjos on August 23rd in Tulsa, Oklahoma on FOX Sports 1. Collard, a late replacement for the injured Mirsad Bektic,  will be making his second appearance in the UFC, while Holloway looks at his ninth.

“God is a big part of my life and he's been blessing me,” Max said. “I don't even have three years in with the UFC yet and it's my ninth fight, so God blessed me. (As for the fight) I'm just going in there and I will come out the winner."

Coming out the winner is something Holloway is acutely familiar with. He hails from the town of Waianae on Oahu in Hawaii, a town known more for having the most homeless people in the state than its professional athletes.

In fact, according to an August 2013 story in Business Insider, Waianae is the single largest homeless encampment in the United States, and Hawaii government officials have offered free tickets for the homeless there to fly to the Continental U.S. – one way.

Ironically, that this town is just blocks away from one of Honolulu’s most prestigious golf courses, and mere miles from the vacation spots most tourists call paradise.

"That’s the thing that drives me, where I'm from,” says Holloway. “We are not supposed to be successful people. And that pushed me because I want people, when they think of Waianae, they think of me, and that good guys can come out of here and be successful. It's crazy when people come to Hawaii, they see the finer things and all this fun stuff; there's bad here and there's good here, but there's always hidden secrets no matter where you go."

In the midst of Hurricane Iselle, which missed Oahu but did damage to the Big Island, Holloway trained in the same camp he started in as a kickboxer several years ago.

"I had my first kickboxing match as soon as I started training, and by the time I was graduating high school I was telling everyone that I was going to be a UFC fighter, and I lost a lot of friends,” he says. “People laughed in my face saying I could never be a UFC fighter, and then I was the youngest UFC fighter at the time, so I made it. I don't hold anything against them. That's their way of thinking. I was brought up to believe nobody can tell you what you can or cannot do. Some of those friends are back now supporting me, so that's cool. I’d tell any kid who has a dream, don't ever let anyone tell you what you can and cannot do, because that person was told they couldn't do something by someone and they believed them."

And he does. Holloway is a frequent motivational speaker in a town where inspiration is hard to come by.

"When I was growing up there were guest speakers who used to come in but they weren't from our city, so me being from here I am able to go to the intermediate school and I tell them, ‘I sat in the same chair as you and you can also be a successful human being.’ Hawaii is very small, but it drives me. We have a lot of talent out here that hasn't been shown, all they need is a little push, especially fighting. BJ Penn opened the door and now a lot of my teammates are also UFC fighters, so if you want it bad enough you can always make your dreams come true."

Like any fighter, Holloway wants a chance to avenge his losses, and Poirier’s name comes up again. However, the humility in Max can be infectious.

“Dustin is fighting Conor (McGregor), who I lost to, so that will be an interesting fight to watch,” he says. “But man, Poirier is a top ten fighter now. I’m not even ranked, so me getting another shot at him isn’t even on my radar. I’m just happy where I am right now, and as long as I keep fighting hard, I believe my talent will take me where I want to go. You put me against anyone, I don't care what weight class, I'm going to have confidence in my power, my cardio and my technique. You can't be going in there scared and think ‘he's better than me here or there;’ I always believe that I'm the better groundfighter, I'm the better stand-up fighter, and that God is always by my side, so I don't care who I'm fighting, I'm going in there with confidence."

Max was raised by his grandparents. His mother was in and out of drug addiction, and his father had long ago abandoned his son. He credits his grandparents for teaching him how to be a part of a family, something he cherishes now that he has a two-and-a-half-year-old son of his own.

“I want the best life I can possibly give to him,” says Holloway. “I had a great life thanks to my grandma and grandpa, and I want to give my son the world. Every day when I am training and when I don't want to do something I think of him, and that's where I get my motivation from. I want him to go to college and be a doctor; I want him to stay as far away from fighting as possible. There are two things you can do when you look at your parents. You can fall into their bad habits or you can be the total opposite. I chose to be the total opposite. My father wasn't around and my mother had drug problems, but I forgive her for her past. I look at my son and I'm just going to support whatever his dreams are. If he wanted to be the best pianist ever I'm going to give him the best advice he can have, and show him what a father is, so when he has a family, he knows what to do and how to take care of them."