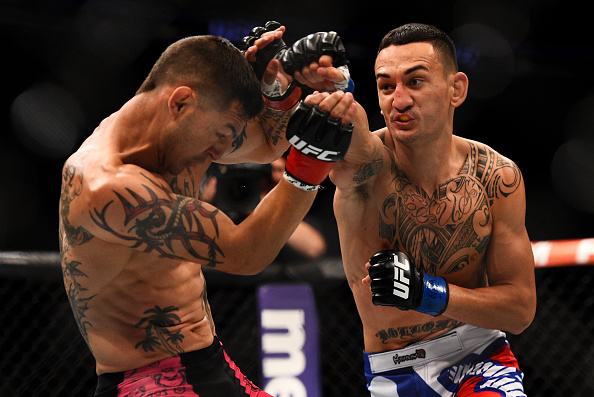 It was only five minutes into the event, but Max Holloway already knew something different was happening in his career. Media circled and began throwing questions at the 23-year-old Hawaiian featherweight just as they did his upcoming opponent, Cub Swanson. The long-standing perennial contender and the surging up-and-coming talent were slated to square off in just a few days, and a crucial position in the 145-pound ranks hung in the balance.

The winner would take a big step up in the hunt for a future title shot, while the loser would see his championship hopes take a sizable hit for the time being. And while his bout with Swanson was arguably going to be the biggest challenge he would face thus far during his time under the UFC banner, what wasn’t debatable was the overall reward of the fight. There was a big moment on Holloway’s horizon, and he was setting the tone for success with a strong suit game for media day in New York City.

“Feel good, look good, fight good,” Holloway said with a smile. “That’s what they say and I’m going to put it to the test. This is a huge fight for me and I’m so ready to get in there.”

As it would turn out, Holloway’s theory of “presentation = performance” took a strong step toward proof on that night in Newark, New Jersey, as he unleashed his best showing to date.

“Blessed” battered the Palm Springs native for the better part of three rounds before putting his foe away via rear-naked choke in the final frame. Not only was Holloway’s victory good enough to earn an additional bonus check from the UFC, but it solidified his place as a legitimate player in the featherweight title mix.

“Getting that win was surreal, man,” Holloway said in the lead-up to this Sunday’s main event tilt with Charles Oliveira in Saskatoon. “It felt great to get the victory over a tough fighter like Cub. Everything is just going my way, and I am going to keep working hard to ensure that continues to happen. Things are going great for me and every step continues to get bigger. My next fight is a main event, but it’s also in a new place the UFC has never been before in Saskatoon. That’s huge for me. I can’t wait and I just feel blessed, man. I can’t explain how appreciative I am of it all.

“I think momentum is very real and it does a lot for you,” he added. “It builds confidence and changes the way you go into your training for your next fight. I have a lot of momentum behind me - especially after that last fight. I’m already a confident guy, but being on this big winning streak has only made me that much more confident in my abilities.”

WATCH: Holloway explains how growing up in Hawaii made him the fighter that he is

While Holloway’s age suggests he’s still in the early stages of his career, his record would reflect otherwise. The Waianae native stepped in on short notice to face Dustin Poirier at UFC 143 and has competed 12 more times in the three years that have passed since making his official promotional debut in Las Vegas.

Furthermore, Holloway’s current run has shown a steady progression in his skills as a fighter. Where the scrappy Hawaiian was once more recognized for being a game fighter rather than a dangerous one, the current version of Holloway is one who is absolutely a threat wherever the fight may take place. For that, the surging contender credits his dedication to sharpening his tools, and his continued success gives him the proof that all the sacrifices made have been worth it.

“I can’t express how hard it is to be away from my family during training camp,” Holloway said. “Yeah, I come home to them, but sometimes I’m gone eight to twelve hours with training and driving back and forth from training. It’s kind of weird because I’m home, but I’m really not, if that makes sense. That is very tough for me, but I do believe the hard work is paying off. I don’t want to be putting everything I have into this and have nothing to show for it. I’m going out there and getting back what I put in and being rewarded for it. Hard work pays off.”

Even though the win over Swanson launched his name into the featherweight title conversation, Holloway hasn’t allowed himself to put too much stock into anything out of his direct reach. Once the bout with Oliveira became official, the former prospect turned contender locked his focus on “Do Bronx” and only “Do Bronx.”

Holloway has been around the fight game long enough to understand the moment you start looking at what may be waiting for you on the horizon is also the moment when the challenge right in front of you becomes too much for you to handle. Holloway refuses to let all those things happen, and he knows the only thing he can control about his potential success is the amount of work he invests into making sure he’s ready. 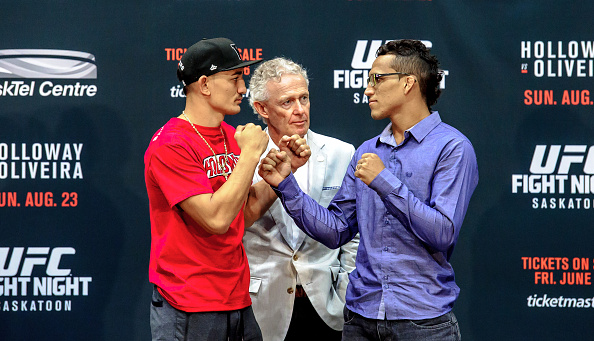 like he was in the lead-up to the bout with Swanson, with his sharp-angled suit and fresh shoe game, Holloway is feeling ready, focused and aware of the moment. He knows his upcoming fight with the Brazilian submission artist is the next big step in his career, and Holloway is going to do everything it takes to make sure everything put into the pursuit of victory was worth it.

“Oliveira is a savage, man,” Holloway said. “He’s beaten some good guys and his stand up is coming along. He’s no joke on the ground and he’s so confident there that he’ll just pull guard to get you there. You have to respect that about him because he’s going to go after that submission until you are asleep or something breaks. But we are both young, hungry guys who both feel like it’s our time now. It’s going to be a great fight.

“When you start looking too far ahead, the things in front of you start slipping away. I’m not going to let that happen to me. The title shot is in the back of my mind and it’s going to stay there until after this fight. I think Frankie Edgar deserves the next shot, but who knows? We’ll see what happens because the UFC likes to throw some curveballs from time to time.”

UFC Fight Night: Check out who's fighting on Sunday