Following his missed chance at "double-champ" status, Max Holloway is eager to defend his featherweight belt against Frankie Edgar
By Thomas Gerbasi • Jun. 12, 2019

Many assumed that if Max Holloway had succeeded in taking the interim UFC lightweight title in his April bout against Dustin Poirier, his days as the featherweight world champion were numbered.

“When the king leaves his throne on hiatus for a little bit, people try to come take over. And we’re at that point. Somebody’s trying to take the throne, and guess what, I’m back and I can’t wait.”

That somebody is Frankie Edgar, and with Holloway back at 145 pounds to defend his crown for the third time in the main event of UFC 240 on July 27 in Edmonton, it’s almost like business as usual for the Hawaiian, who lost a hard-fought five-round decision to Poirier in a Fight of the Night classic.

And while becoming a double champ and defending both crowns were enticing propositions, there is no lack of motivation for him in returning to featherweight to face Edgar.

“This fight excites me and I get motivated for every fight,” he said. “Every time we talk, I’m 0-0 every single time, and I can’t wait to go out there and remind the world why I’m one of the best fighters, if not the best fighter, in the world.”

As for why this fight with the former lightweight champ from New Jersey has him amped up, that’s simple.

“Third time’s the charm,” Holloway laughs. “That’s the whole concept of this fight. We had some unfortunate events that made me back out one time and him back out one time. So we’ve been training for each other for a while now. I’ve been around for a while, 20 fights in the UFC and this is my third title fight in eight months. There’s a bunch of film on me, a bunch of film on him, and I can’t wait. We’re ready. He’s a former champion and this fight should be fun. This is one of the guys that’s always been in my head that I want to fight him. To me, he’s like (Jose) Aldo. He’s one of the greats and I’m just happy that I get the opportunity to share the Octagon with him.” 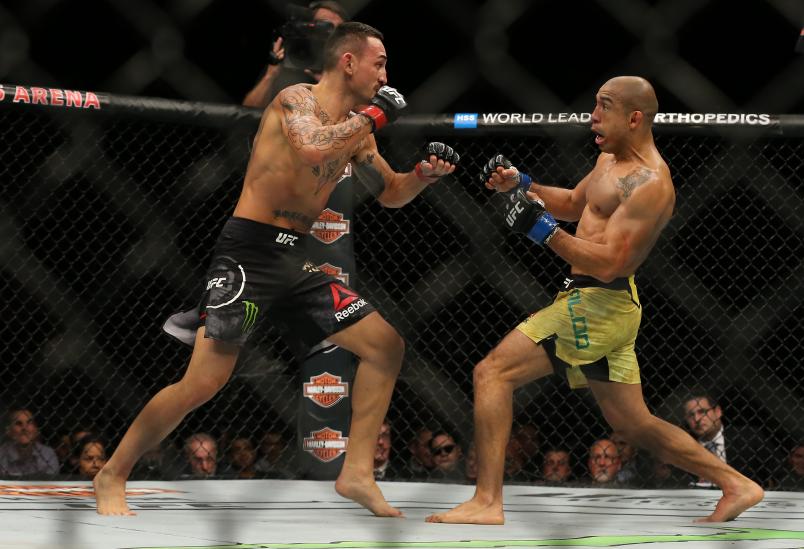 And while Holloway – still just 27 years old - admits that there’s plenty of time spent watching film of both Edgar and himself, he can’t look at any of that footage as a fan yet.

“It’s too soon for that,” he said. “I wish I could, but people start celebrating what they did and I’ve got a lot more time in the game. I say I don’t want to fight a day after 35, but we’ll see what happens when 35 comes because it’s hard for people to retire from any sport. I saw Dwyane Wade and he talked about how he’s going to talk to a therapist to help him with getting used to being retired. People don’t know. You’re used to doing one thing so much and it just disappears and people don’t know what to do with themselves. So right now I can’t be a fan. Maybe when that time comes I’ll get to be a fan and that will help me cope with retiring, but right now, we’ve got a lot more to do.”

That work takes place in the Octagon and out; starting inside with his bout against Edgar and outside with his lifetime job of setting a good example for his son, Rush.

“What motivates me a lot is that little man, ‘Mini Blessed,’” said the proud papa. “All these records and stuff are cool, but me being able to show him how you should carry yourself and how you should act is the ultimate win for me. And being able to give this kid a life, maybe he’ll go to college, maybe he fights…”

“I don’t want him to fight; I keep forcing him to be a doctor and he’s kinda over it. (Laughs) He wants to be a fighter, he told me, but we’ll see what happens.”