Max Griffin Has A Reaffirmed Confidence

Ahead of his pay-per-view debut, Max Griffin found new facets of his game he aims to capitalize on in Las Vegas
By Zac Pacleb, on Twitter @ZacPacleb • Mar. 4, 2020

Max Griffin is so elated he wants to scream.

“The card is stacked, and for me to fight (Alex) ‘Cowboy’ Oliveira, you feel me? I’m so excited,” Griffin told UFC.com. “I’m grateful to be in this position, to be just put on the main card, to make my pay-per-view debut, first fight on the card, it’s an honor. I’m very fortunate, and it’s my time.”

When pressed on why he feels particularly good ahead of his bout with Oliveira, Griffin said he learned a lot about himself since dropping a decision to Alex Morono five months ago. For one, he said going through a few rounds of grappling with Michael Chiesa and Ben Saunders helped him understand where he is in that portion of his game, calling those rounds the “light flipper.”

“You need to kind of get in there with those guys and test the waters,” Griffin said. “The waters are good. We’re swimming with sharks, and I’m a great white, so it’s good. It’s great.”

That Griffin’s confidence pays off with a victory feels paramount, as he is 3-5 in the UFC without ever achieving back-to-back wins.

After the Morono fight, Griffin said he didn’t feel nearly as tired as he thought he’d be, and when he went to the UFC Performance Institute, he said the returns on his cardio impressed the PI staff. What it told Griffin, though, is that he could turn up the pressure in his fights, something he’s looking to do against Oliveira. 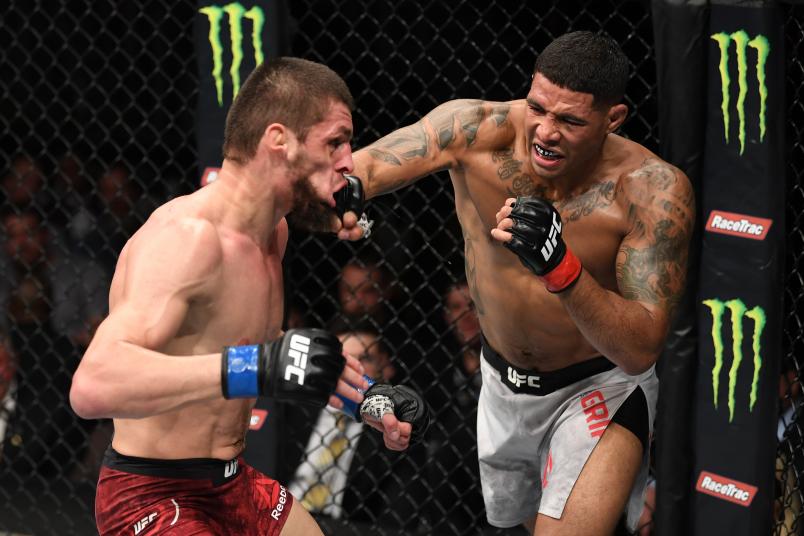 Though the matchup with Oliveira projects to be an exciting one, it is also a fight featuring two fighters in definite need of a win. Oliveira is coming off three straight losses, and Griffin is well-aware of the kind of urgency that might stir up in his opponent.

As the opening bout on the main card, Griffin can set the bar for the rest of the night, and that’s something that Griffin gets openly giddy about.

“I’m going to put it on him on pay-per-view,” he said. “It doesn’t get any better. World watching, everyone is going to be watching, tuned in, primetime, I couldn’t ask for a better fight.”

Overall, Griffin seems like he’s in a good place heading into fight night. His reaffirmed confidence in his grappling and cardio aside, he said his work to get mentally prepared has him in the right frame of mind.

That mental work includes a lot of meditation, guided over the phone by a coach, positive and powerful self-talk and a lot of visualization.

“I’ve done the fight hundreds of times, probably, so far,” Griffin said. “All of it. So, it’s almost like a movie you’ve seen 50 times. You know what’s going to happen.”

Between his renewed confidence, Griffin seems primed to put it all together on March 7. He gets the biggest chance of his career in Alex Oliveira, and the bout could prove to be a critical point in his career. In Griffin’s mind, though, it’s just the beginning of something special.