Max Griffin Giving Back To The Gym That Made Him

As if preparing to take on a UFC veteran like Carlos Condit at UFC’s largest event of the year wasn’t already enough for UFC welterweight Max Griffin, the 35-year-old thought what time better than the now to kick off a fundraiser?

“One thing I like to do around here is to help the kids and help the community. So, I had this idea to raise money for the kids,” Griffin said after arriving back in Sacramento following his victory at UFC 264. “We actually have a U.S. pankration team, and eight of the kids on the team are from Sacramento.”

Not only does nearly a quarter of the United States’ youth pankration team hail from Sacramento, but they train at a gym Griffin trained at before finding his way to the UFC, called House of Moons.

“Pankration is basically MMA, without punches to the face,” Griffin explained of the sport. “When I first started fighting, I had a lot of pankration matches.”

Make A Donation To Support House Of Moons

The United States has built a reputation of dominance in the sport at the youth level, with 28 medals being claimed at the last IMMAF Youth World Championships to be held, 16 of which were gold.

Inspired by Conor McGregor’s efforts to send Ireland’s youth team to the IMMAF Youth World Championship later this month, Griffin had the idea to auction off UFC gloves, signed by his teammates at Team Alpha Male like Cody Garbrandt, and other names like Derek Brunson, Michael Chiesa and Kevin Holland. 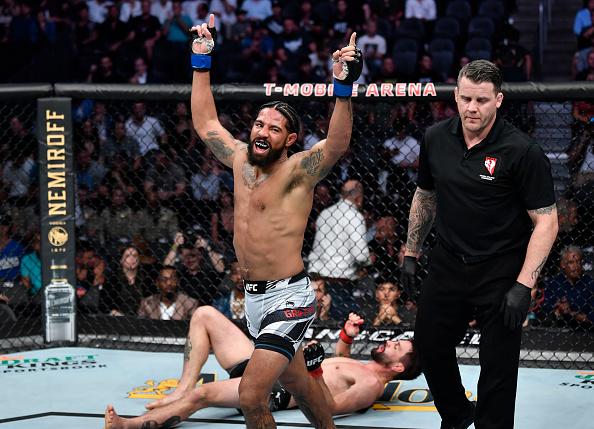 Max Griffin reacts after the conclusion of his welterweight fight against Carlos Condit during the UFC 264 event at T-Mobile Arena on July 10, 2021 in Las Vegas, Nevada. (Photo by Jeff Bottari/Zuffa LLC)

“One of these days I’ll be able to pay for all of them. But right now, I’m just trying to get the word out there so we can get another victory for the United States.”

The eight competitors from Sacramento, ranging from ages 12 to 17, join a team of nearly three dozen athletes from across the country, and will compete in Sofia, Bulgaria at the IMMAF Youth World Championship from July 29-August 1, 2021.

Learn More About The House Of Moons Team

“When I was a kid, we didn’t have this help like we do today. But these kids just need people to believe in them,” Griffin said. “Kids need something to do. I did martial arts as a kid, starting when I was four years old -- it really got me with the respect, discipline, having something to do, having a goal. Being respectful to other people goes a long way. These kids need direction and positive influences.”

While the raffling off for the signed gloves has ended, you can still donate to help send Sacramento's Team USA representatives to Bulgaria at the end of this month here.