Max Griffin's new found mental fortitude has launched him to a new level. Find out why:
By Gavin Porter, On Twitter @PorterUFCNews • Nov. 5, 2020

Gone are the days of stressing; gone is the tension that used to cloud his mind when he walked to the Octagon. When Griffin (15-8) makes his tenth UFC appearance on Saturday’s UFC Vegas 13 card, he expects to be relaxed and enjoying each second of his welterweight bout with Ramiz Brahimaj.

With the help of a mental coach, Griffin focused on eliminating anything in his mind that could limit his ability to perform in the Octagon. The 35-year-old Californian has established new core values and identified areas that he needed to recalibrate. Griffin promises that this refocused and revitalized version will deliver in a big way on November 7.

“I haven’t just been thinking this way; I’ve been utilizing these strategies,” Griffin told UFC.com. “It’s like I’ve been blocking myself this whole time. This is my dream, to be one of the best fighters in the world, so why keep blocking my own energy and kind of holding myself down, so to speak? Now I’m going to let that s*** go, baby, and it’s going to be beautiful.”

The fight that stands out to Griffin as one where he felt like he was having the most fun was his impressive win over Mike Perry. He refers to that fight as a “masterpiece” and is confident that we will see that type of performance from him against Brahimaj.

“I’m going to win, period, and I’m going to beat this guy bad. I’m excited to do it. I really can’t wait,” Griffin said with a smile. “I’m ready to smash this guy. Straight up.”

Another reason for Griffin’s confidence comes from his team and training partners. Between training at Marinoble’s Martial Arts, MMA Gold and Team Alpha Male, Griffin has surrounded himself with highly credentialed training partners and coaches. They’ve helped him realize that he doesn’t need to get into a war in every fight, he just needs to dominate.

“I’ve had a bunch of those Fight of The Night style fights. That’s just in me, but this fight won’t be that. I’ve allowed those fights to be like that. This time around, I’ve learned a lot from those fights. I’m no stranger to blood, I’m no stranger to a real war; I don’t mind them. But I’m letting them do that,” Griffin said. “I need to have more of a great time. It’s like I block my energy by taking it so damn seriously. I’ve been really training more like that and putting these core values into everyday life and everyday training and it’s really been working.” 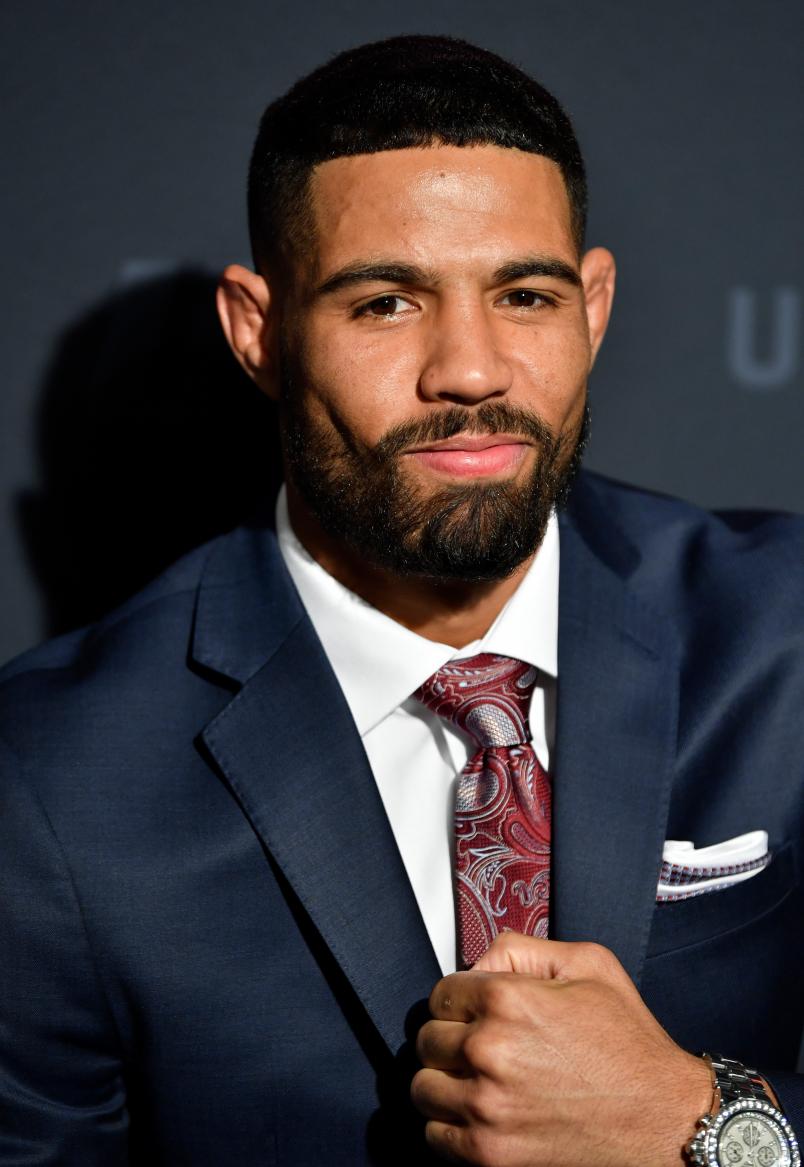 Max Griffin speaks to the media during the UFC 248 Ultimate Media Day at UFC APEX on March 5, 2020 in Las Vegas, Nevada. (Photo by Jeff Bottari/Zuffa LLC via Getty Images)

physical and mental evolution. Griffin sees his experience playing a factor against the debuting Brahimaj and he is eager to prove that he’s simply just on a different level than his opponent.

“This is my tenth UFC fight, number 10 baby; I’ve been here for almost five years now. I have a lot of experience and I’ve fought some of the best guys on the planet. Colby Covington my first fight, Mike Perry, Thiago Alves, [Alex] Oliveira, the list goes on and on. Elizeu Zaleski dos Santos, I fought some scary guys,” Griffin said. “I have way more ways to beat this guy and I’ve fought way better guys than he has and I’m just confident in everything about this fight. All that aside, with my mind, I can beat anyone when I feel like this and when I’m in a good mood.

“I’m finding myself being loose and breathing at a good pace and being relaxed. That’s letting me flow and I’ve been doing wonderful. It’s night and day with my performance when I’m having a good time, and you’ll see that on Saturday.”

Tune into ESPN+ on Saturday to watch Griffin’s bout with Brahimaj on UFC Fight Night: Santos vs Teixeira.