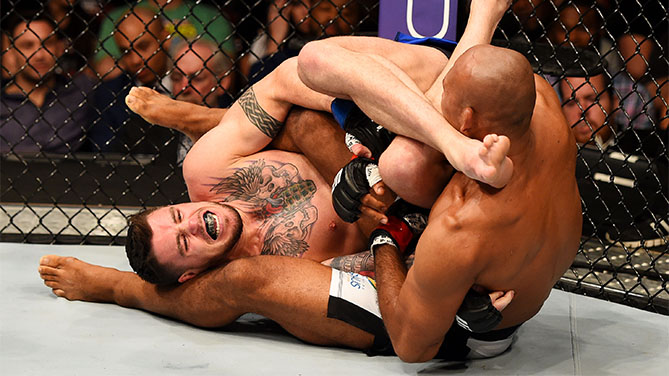 Chris Camozzi courage in taking a bout against number one middleweight contender Ronaldo “Jacare” Souza on a week’s notice will never be questioned, but neither will the ability of Souza to do exactly what he came to Prudential Center to do on Saturday night, and in submitting Camozzi in less than a round, he made his statement that he’s ready to challenge for the 185-pound title.

Camozzi replaced the injured Yoel Romero in the UFC Fight Night co-main event. The bout was a rematch of a 2013 fight in which Souza also submitted Camozzi in the first round.

Souza came out fast, Camozzi responding well under the pressure, but Jacare’s first takedown attempt easily hit the mark, and the Brazilian immediately went to work on improving his position and finishing the fight, and he did just that, locking in an armbar that produced a verbal tap out by Camozzi at the 2:33 mark. 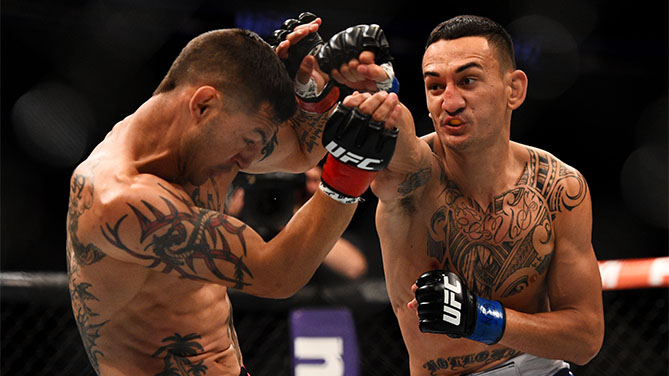 Max Holloway’s six-fight winning streak is impressive in and of itself, but when that sixth straight win saw him finish off top featherweight contender Cub Swanson in the third round tonight, it added that little something more to the resume of a young man who is on the fast track to a 145-pound title shot.

In the past, Swanson’s best striking performances always occurred when he was able to attack his opponent from several different angles. In the first round, he was victim of his own medicine, as Holloway used movement, plus a varied and busy attack to keep Swanson guessing. The Californian did get his share of hard shots in, but not nearly enough to deter Holloway, and by walking straight in, he was giving his opponent plenty of opportunities to hit him.

Holloway moved from volume to precision in the second, potshotting Swanson throughout much of the round. But in the closing stages, Swanson began to get more shots in as Holloway did more moving than punching and kicking, tightening matters a bit.

In the third though, Holloway appeared to have his second wind, as he again pressed the action and even added in a display of his ground game. The first submission attempt came up short, but the second finished the bout, with the Hawaiian’s guillotine choke producing a tap out at 3:58 of the final frame.

With the win, the number nine-ranked Holloway improves to 13-3; the number five-ranked Swanson falls to 21-7. 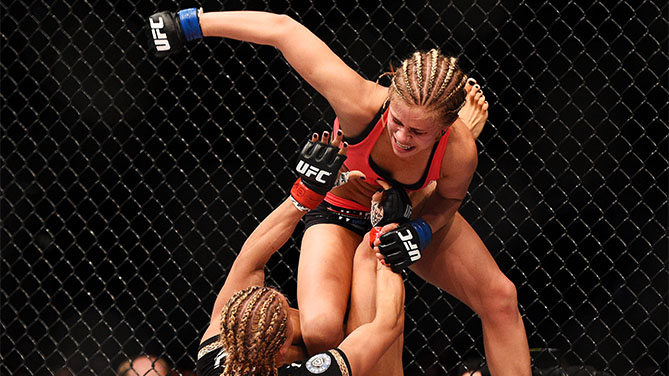 Despite winning her first UFC fight in impressive fashion, many wondered if it was too much too soon for the 21-year-old strawweight to be facing veteran Felice Herrig. It wasn’t, as VanZant drilled out an impressive three-round unanimous decision win that will likely prompt a jump up the strawweight rankings ladder.
"I'm the underdog and I'm supposed to lose," VanZant said. "Winning makes me feel so much better."

It was a frantic start for the two strawweights, VanZant initially looking like the stronger of the two, but Herrig able to take her foe’s back and give her some difficulty on the mat until VanZant slammed her way out of trouble and got back to her feet. Returning to the clinch, the two took turns in control until a throw by VanZant landed her in the top position, where she fired off strikes on the veteran before ending the round with a leg lock attempt.

The grappling-heavy battle continued in round two, VanZant winning the positional and ground striking battle, while Herring kept busy with submission attempts, neither fighter willing to give an inch to the other.

The energy level of VanZant didn’t wane in the slightest as the third round opened, and her busy striking on the mat kept Herrig on the defensive, even if the punches weren’t fight enders. Herrig did hang tough, briefly taking VanZant’s back before the Californian resumed control from the top again, firing off more strikes that had the referee watching the action closely.