Mauricio "Shogun" Rua - Back on Track

“It (regaining the title) is my long term goal, but my focus now is to beat Dan Henderson." - "Shogun" Rua 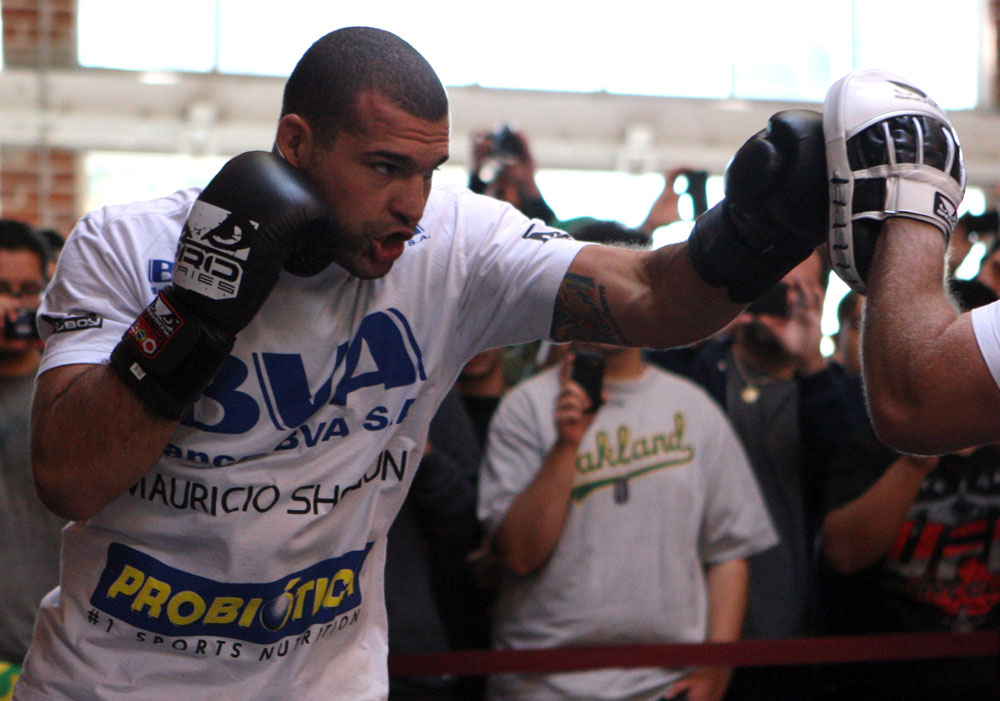 After a rough day, is there anything better than coming home to be around family and friends so you can relax, regroup, and start again? Not for Mauricio “Shogun” Rua, who got to come back from the March loss of his UFC light heavyweight title to Jon Jones with an August fight in Brazil that had 14,000 of his closest friends and family cheering him on.

Now that’s the way to start a comeback.

“It was amazing,” said Rua through manager / translator Eduardo Alonso. “I was under a lot of pressure because that show meant a lot not only to me but to MMA in Brazil in general. It was a rematch and I was coming off a loss, so pressure was high. And it was the first time live on mainstream TV in Brazil. But in the end, all went well and the feeling was incredible.”

It went more than well for Rua, who avenged his 2007 defeat to Forrest Griffin with a knockout win that took less than two minutes and immediately catapulted him back into the growing line for a shot at the man he lost the belt to in Jones. More than that though, it was, as Rua, pointed out, a big day for MMA in Brazil, a country that now claims UFC champions in three of the UFC’s seven weight classes (Junior dos Santos, Anderson Silva, Jose Aldo). Rua wants to join his countrymen in that group again, and if the response he received at UFC 134 was any indication, he will have a nation behind him in his quest.

“Man, it was amazing, and even though I thought it would be great I could never really expect that atmosphere,” he said of that night in Rio de Janeiro. “It was unreal, and only those who were there know what I'm talking about.”

Yet even here in the United States, where he will headline UFC 139 against Dan Henderson Saturday night, Rua still has an enormous fanbase of diehard fight aficionados who began following him back in his days fighting for Japan’s PRIDE organization. In fact, his bout with “Hendo” is a dream fight that could have happened twice in the promotion years ago, but never came to fruition.

“I always admired Dan Henderson as a great fighter, and he fought my brother Murilo "Ninja" back in 2001 in PRIDE,” recalled Rua. “When I started to make a name for myself in PRIDE, people always talked about this fight taking place, and we both entered the Grand Prix tournament in 2005, where we could have met in the second round, but I ended up facing Rogerio Nogueira instead, since he defeated Dan. Later on, when he got the (middleweight – 183 pound) belt from my former teammate Wanderlei Silva, I was next in line to challenge him for the belt, but PRIDE collapsed, so that never happened. I'm glad we are finally having the chance to fight, as it's a privilege to fight legends.”

And while a lot has happened for both fighters since the last PRIDE event in 2007, Rua still holds the organization in high regard.

“I think the production of the show, the large arenas, the raw rules and the way fighters would always engage in a fight, giving their all, got people in love with the show,” said Rua when asked why PRIDE garnered so many loyal fans. “There was certainly a great feeling about fighting in PRIDE back then, and seeing those epic matches. However, UFC has got to a level which is amazing, where we never would expect to be so soon, so there's a great feeling in fighting in the UFC nowadays, and certainly much more pressure.”

So what does he miss the most about the PRIDE days?

First there’s Henderson though, who may be the youngest 41-year old on the planet thanks to a three fight winning streak (all KOs) that includes a first round finish of Fedor Emelianenko earlier this year. Rua, who won’t hit his 30th birthday until November 25th, knows that he’s in for a fight in San Jose.

“Obviously his wrestling skills and his powerful right hand are his main weapons, as everybody knows,” he said. “But I can't be concerned or pay attention only to that, as he is a great fighter and I have to be prepared for anything that may happen in the fight.”

And to get ready, Rua decided to stay home in Brazil, training in Sao Paulo as opposed to going back to the States to work with his former Chute Boxe coach Rafael Cordeiro.

“I made that decision because I know we have a lot of great training here in Brazil as well, as I trained here for several fights, such as against (Chuck) Liddell and even (Lyoto) Machida. My last fight was still kind of recent and I needed to stay closer to my family, while still focusing and dedicating myself to training camp, so that's why I went to Sao Paulo. This way I could keep focused only on training but still be close enough to home. There is great training in the USA, and also great training in Brazil and each fight is a different fight and a different case.”

This week’s fight certainly is a different case, as it will be scheduled for five rounds. It shouldn’t be an issue for either fighter, considering both have been the championship distance before, but you still have to be ready for the possibility of fighting for 25 minutes.

“You’ve got to adapt all your training for a 25 minute fight, and get your system used to doing the five rounds. I have fought five rounds before and so did Dan, so I think we will both be prepared.”

Will a win get Rua another shot at Jones? That remains to be seen, as Rua’s old rival Lyoto Machida will have something to say about that on December 10th when he battles Jonny Bones for the 205-pound belt. Rua will be watching closely.

“I think it's a great fight, and an intriguing fight,” said Rua of the UFC 140 main event. “Jones is the champion and deserves to be so, and he’s a very tough fighter to beat, but Machida is also very skilled and not an easy fighter to defeat. Their styles are different, yet they both can create problems for each other. I think this fight is very intriguing.”

If he has to face one, does he prefer a little revenge against Jones, or a rubber match with “The Dragon?”

“As a fighter, I want to fight the best and challenge myself, and I have no personal feelings regarding any of them,” he said. “It's our job. I’ve got to focus on Dan Henderson right now, which is all that matters at this moment.”

But it would be nice to beat Henderson and get another crack at the title, right?

“It would mean the world,” said Rua. “It (regaining the title) is my long term goal, but my focus now is to beat Dan Henderson, which is a tough task in itself. After that I'll think of what's next and talk to my manager and the UFC about it. Another title shot should be a natural consequence of good work, not something I should be concerned about.”