Maurice Greene May Have Found A New Home

Maurice Greene's relocation to Albuquerque for his training camp may end up becoming a permanent move
By Thomas Gerbasi, on Twitter: @TGerbasi • Jun. 23, 2020

One day short of a week after the May killing of George Floyd in Minneapolis, a man who made his home in Minnesota finally broke down.

“I just couldn't hold it in,” said UFC heavyweight Maurice Greene. “I sat my son down and was trying to educate him on what's going on. I've got bi-racial children and we saw the police all over these streets. Two blocks away was where they were doing the protests, but as the nightfall comes, sometimes it starts to get ugly and the fear in my son's eyes, it did something to me. It really hit home last night and this morning.”

Now training in Albuquerque, far removed from the events of May 25, Greene’s life had been a whirlwind since he signed for a fight this weekend with Gian Villante. He expected to train for the bout at home in Minnesota after an amicable split with his former team at Factory X in Colorado, but when the opportunity came to work with another renowned team at Jackson-Wink MMA, he packed his bags, got his fiancée and his two kids – eight-year-old Jack and four-year-old Olive – and made a 24-hour drive to New Mexico.

“I've always wanted to come here,” said Greene. “They've got a stable of heavyweights and that's what I've been missing my whole career. We're not talking about small heavyweights; we're talking Juan Adams and Don'Tale Mayes, and then to put the icing on the cake, you have the greatest of all-time (Jon Jones) under the same roof. Obviously, they did something great with him and know how to make that body style successful and I'm a heavyweight with a similar makeup. After I came here, I talked with Greg (Jackson) and sat down with Mike Winkeljohn and we're on the same page and this is somewhere I want to be. I may even be a resident out here sooner than they know.”

Between settling in with his family in a new location and with his new team in a new gym, Greene was on the go 24/7. But that first weekend in Albuquerque, the news from his home state finally caught up to him.

“I lived with this my whole life, like a lot of us have,” said the 33-year-old. “It wasn't right to begin with and it didn't feel good, but the fact that we literally listened to that man speak his last words, and his last words were words of terror, I was just beside myself. I can't even watch it again because it hurts that bad.”

And then he had to explain it to Jack. It was a reminder that while fighters are often superheroes when competing, when the bright lights are off, they’re all human beings with the same responsibilities and emotions everyone else has. Greene’s family came first. Then it was time to get back to the business of prizefighting, and after back-to-back losses to Sergei Pavlovich and Aleksei Oleinik, he knows what’s at stake against Villante.

“Every fight is a must-win situation,” he said. “I try not to put pressure on myself. Right now, I'm trusting the process. Had I been with Factory X or Jackson-Wink, I would have been prepared either way. I just think Jackson-Wink may be the best fit for me for the environment, for the coaches and for the fact that I've got heavyweights and bigger bodies to work with. That makes a big difference. And it's not just bigger bodies, but high-level big bodies.”

Greene is one of those high-level big men, and when you’ve reached a certain point in your career, you believe you can beat anyone anywhere. It may be why Greene had no issues going to the mat with submission wizard Oleinik in January.

“You want to know why, though?” Greene asks. “It wasn't intimidating on the ground. I can't not do jiu-jitsu against these guys. And when you're punching them in the face, their jiu-jitsu changes. When you get hit in the face, you can't do jiu-jitsu sometimes. So wherever the fight brings me, I'll be more than prepared for it. I lost the fight because I made errors, and at that level with somebody who's been in that many fights and with that much experience, you can't make those errors that many times.”

And truth be told, Greene wasn’t too bothered battling it out in the wheelhouse of “The Boa Constrictor.” 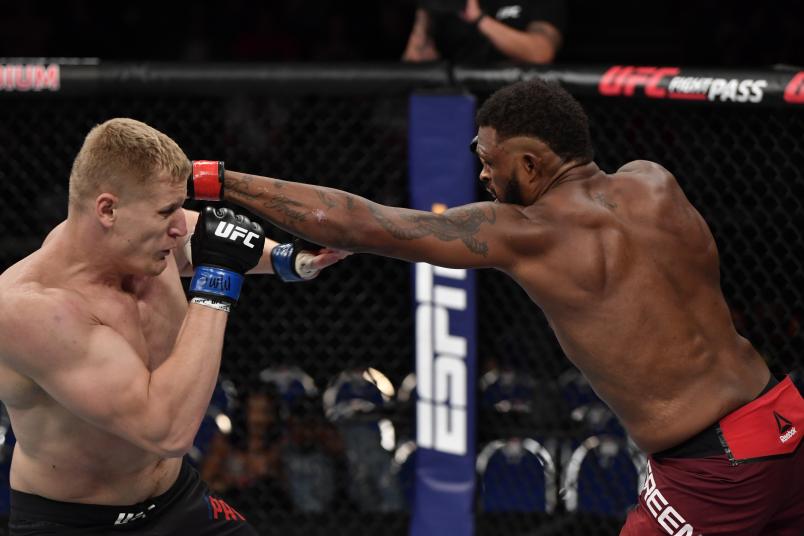 “I was having too much fun,” he laughs. “I was trying to knock his head off his shoulders. And that was half of the problem. You gotta stay EA Sports ‘in the game.’ (interim UFC lightweight champion) Justin Gaethje said it best. He said he lost two fights because he was having too much fun. That's what happened. It's the most free time of my life.”

I point out that I saw what Greene did there, mentioning the developer of the UFC series of video games. Is that a hint?

Maybe he can face off in Madden football with Villante after their bout this weekend, which isn’t exactly a meeting of strangers, considering that while the New Yorker played linebacker for Hofstra, his defensive tackle was a four-year starter named Ed Greene. Yeah, Maurice’s brother.

“I met Gian when I came out to visit my brother,” said “The Crochet Boss.” “It's a small world. And here I am competing with him on a different scale. I'm competing against him.”

So what should Villante expect from his first heavyweight bout as a member of the UFC roster?

“He's ready for it all,” said Greene. “You think he don't train with heavyweights or spar with heavyweights? He was a D-1 wrestler and a D-1 football player. What is he not ready for? In the back of my head, I'm gonna see the best Gian Villante there ever will be, and if he's anything less than that, that's good for me. And he's gonna get the best Maurice Greene that you've seen yet.”