“Once I take the top position, I will try to utilize it as fast as I can with elbows, punches and whatever will bring as much punishment in as short of a time to finish." - Vladimir Matyushenko 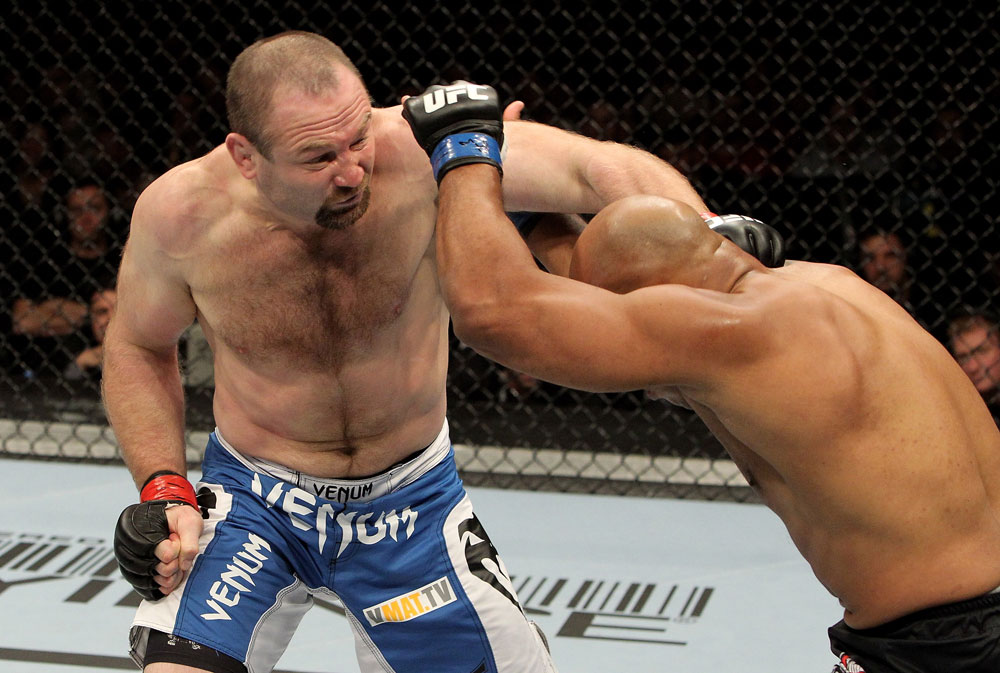 The 40 year old mark is a pivotal one for all professional fighters. It is around that time in a fighter’s life when sports journalists start counting down the days to their retirement. Winning or losing, once a fighter nears the big 4-0, it becomes all the media can talk about.

It’s as if these sportswriters expect the clock to strike midnight on the 40th anniversary of a fighter’s birth and this guy will turn from a muscled gladiator into a pumpkin. If that’s the case then someone forgot to tell UFC light heavyweight Vladimir Matyushenko because he still looks like he’s cut out of rock and twice as tough.

At 39 years and 10 months old, “The Janitor” was dropping elbows in Germany and racking up career win number 25. And for 40 years and 4 months old, the 14 year MMA vet is planning on going to war with UFC 114 “Fight of the Night” winner Jason Brilz in Canada at UFC 129.

It doesn’t appear the word “retirement” is in the Belarusian’s English vocabulary. Nor is the phrase “back-to-back losses” as Matyushenko got back to his winning ways with a quick first round TKO victory over Brazilian Alexandre Ferreira at UFC 122 in Oberhausen. As per usual, Matyushenko’s superior wrestling and submission defense were the key to him winning by halting “Cacareco” and his early onslaught.

“He tried to take me down and I know ‘Cacareco’ is good on the top and a good submission guy. But I didn't give up any position for him to submit me. He tried to go for a leg lock, he tried to do something, but I shut him down.”

Shutting down Ferreira’s ground game is easier said than done considering his 18 - 6 record at the time was highlighted by an astounding 17 submission victories. But an equally astonishing number is the “0” on Matyushenko’s record under submission losses. After battling over a decade for his 25 - 5 career, no one has been able to submit “The Janitor”, even after two tumbles with standout Brazilian Jiu-Jitsu black belt Antonio Rogerio Nogueira.

“My wrestling speaks for itself. If you know positions on the ground then it is hard to get submitted from a bad position. I think all of the Jiu-Jitsu game is designed for self-defense from an attacker that doesn't know much. But if you are the attacker and you know where to put yourself then it is not easy to submit you.”

Next up to the task of trying to put “The Janitor” in a bad position and capitalizing on it is "The Hitman" Brilz. The 3x Academic All-American wrestler from the University of Nebraska-Omaha has an impressive 18-3-1 record and was originally slated to fight Matyushenko in that November show, but was forced to withdraw due to a back injury. Now, the two are set to tangle at UFC 129 at the Rogers Centre in Toronto in front of the largest crowd ever assembled for a UFC event.

The matchup is quite interesting, as both are stocky 205ers with excellent wrestling and are eager to make this a memorable fight on this historic card. “It is a very important fight for me and I think it is going to be one of the hardest too,” says Matyushenko, who is 4-1 in his second stint in the UFC, with his lone loss coming at the hands of UFC light heavyweight champion Jon Jones. “My problem is that I not only want to win just to win, but also to make it a fun fight and an exciting fight for the fans. I think he is thinking the same thing. I think we are bringing the same mindset to the fight and we want to show everything we have got to the fans and the UFC.”

To prepare one juggernaut to face another, “The Janitor” has been training at his own gym, VMAT, in El Segundo, California, as well as taking advantage of the nearby Los Angeles gyms and raiding their talent pool. For this fight, Matyushenko has enlisted the help of Jared Hamman, Fabricio Werdum, Antoni Hardonk and Mark Munoz. “He (Brilz) is very persistent and he keeps going. He doesn't stop. I have to be in great shape for this fight because he showed with his last fight against Nogueira that he could keep the pressure going on the whole fight.”

Brilz and Matyushenko have a great mutual respect, not only as wrestlers and mixed martial artists, but outside the Octagon as burly guys with amiable personalities. “He's a good guy and we've had some beers together,” laughs Matyushenko, who in a similar drinking anecdote took shots of vodka with Jon Jones at an after-party following their fight and told him he’d better win the UFC belt. “It's weird we are fighting each other now, but really, any 205 fighters can be potential opponents. But there is nothing stopping us from talking and being friends after a fight.”

Regardless, this is pre-fight time and friendly or not does not concern “The Janitor”. “A fight is a fight,” bluntly states Matyushenko, which means this is well-worn territory being his 31st professional fight, and he simply wants to make it a winning one. “I am only thinking about my opponent's weaknesses and how I can exploit them in a fight. All the similarities between us will come out after the fight. I can give him a hug and we can go grab a drink. Before the fight, I'm just thinking about winning and how to utilize my strengths to beat him.”

Matyushenko’s main strength going into this fight is a magnitude of incomparable experience. Matyushenko started wrestling two-a-days back in prep-school 25 years ago and was competing against the best the world had to offer only a few years later. “The Janitor” has fought in rings and cages on four continents and gone toe-to-toe with championship belts on the line for multiple organizations. Even the origin of Matyushenko’s nickname is a testament to his historic credibility.

“It started when I was 18. It was back in Russia, I wrestled for the national team. We had a big wrestling tournament. I just had gotten out of my military unit and I'm supposed to wrestle big stars like Kevin Jackson, Dave Schultz, and Mark Coleman. Before weigh-ins, I was cleaning up the mats because the American team had been training and the mats were sweaty and I didn't want to slip on them. I took a broom and was cleaning them up a little bit. The next day, I had to wrestle these world champions and I was only 18 years old and I won the whole tournament. The American coach was making fun of Kevin Jackson and Royce Alger that they lost to a Russian janitor. He joked, ‘He's not even a wrestler. He was setting up the tournament yesterday and he’s never wrestled before.’ When I came to America and started fighting they were saying it's the ‘Russian Janitor’. As I have continued fighting the name has stuck with me.”

For the past 22 years, “The Janitor” has been cleaning up opponents on wrestling mats then in MMA cages and there seems to be no end in sight. “Once I take the top position, I will try to utilize it as fast as I can with elbows, punches and whatever will bring as much punishment in as short of a time to finish,” Matyushenko explains. It’s a strategy he has used to near perfection for over a decade, and now it’s Jason Brilz’s problem to stop. At UFC 129, Matyushenko will aim to make those pencil-necked naysaying writers eat their words and show that "The Janitor" can still mop up the competition after 40.