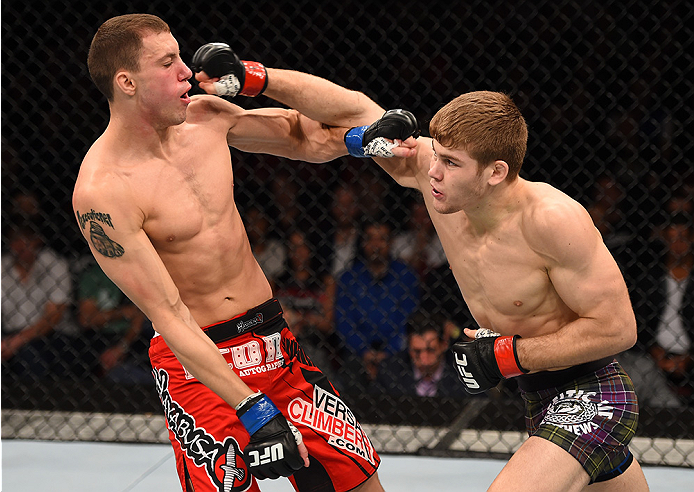 By their very nature, fighter are a nomadic breed. Training and the effort to expand one’s skill set often requires athletes to set out into the world to find coaches and fellow fighters who will help them push toward the next level of their progression. Even if they can find what they need within a comfortable distance, competing in the sport they’ve committed to will undoubtedly take them into foreign lands to exercise their craft.

Yet, before a fighter can shift into a different global gear, there are certain things that must be mastered in the place they call home. In that regard, Jake Matthews finds himself at an interesting crossroads in his young career.

The 21-year-old Australian lightweight blazed through the regional scene in Melbourne to earn a call from the premier organization in mixed martial arts in just two years of work as a professional. Getting a chance to step into the Octagon is a feat thousands of fighters never accomplish, but it was a task he traversed in lightning quick fashion. And where just getting to the big show would be more than enough for some, Matthews came to the UFC with a much bigger picture in mind.

The XLR8 team representative set about establishing himself in the crowded lightweight ranks in 2014 and stamped an impressive promotional debut by finishing Dashon Johnson with a triangle choke in the third round of their tilt at UFC Fight Night: Te Huna vs. Marquardt in New Zealand. It was a solid first showing for the Melbourne native, and he would build further momentum by securing yet another finish in his next outing four months later in front of his fellow countrymen in Sydney.

Suddenly, it seemed Matthews was fitting to break out into a much larger realm of competition and recognition, and the only thing standing in his path was fellow upstart James Vick. Much like Matthews, “The Texecutioner” had earned acclaim as a highly touted prospect, and their showdown at UFC Fight Night: Miocic vs. Hunt back in May had a solid amount of hype attached to it, as the winner figured to be ushered into the next tier at 155 pounds.

Matthews was as confident as ever heading into the bout and that hubris would prove costly, as Vick earned the first-round submission victory. And while Matthews was ultimately disappointed with his performance and the outcome, in the months since he’s come to appreciate the lessons learned on that night in Adelaide, Australia.

MMA is a sport where gainful experience often comes with a misstep, and Matthews isn’t willing to make the same mistake twice.

“I’ve learned to not think about anything beyond the fight and what could happen,” Matthews said. “That was the case in my last fight because of all the things that could have come with a win and the extra spotlight that was on it since it was a main card bout. I was looking ahead too far and just got a big head. I’m not going to lie about it. I just got cocky in there and that cost me. For this fight I went back my old way and how I’ve always gone about looking at things. I’m not thinking about anything beyond my opponent and the job I have to do.

“I’m glad that happened where it did in my career rather than making that mistake when it really mattered and I’m in the top 10 or something like that. It’s a lesson learned and you take what you can from it. You take the positives, leave the negative behind and move on to the next one.”

And for Matthews, the next fight will come with some extra meaning attached.

Not only will he be looking to get things back on track and return to the win column, but his bout against Akbhar Arreola will come on what is going to be a history making event at UFC 193 in his home city of Melbourne. Recent years have seen MMA explode across Australia, and Saturday’s Pay-Per-View card will take place in front of 70,000 fight hungry fans “Down Under.”

While Matthews admits the attention surrounding the event has been impossible to avoid, it’s also something he’s not allowing himself to get caught up in. The only thing that matters to him is his upcoming scrap with Arreola, and he’ll save the rest for once the job is done.

“I really don’t read too much into the other things that are going on. There has been a little bit of thought as to the size of the crowd and the other people competing on the card, but the main thing in my mind has been my opponent. It’s just going to be him and I in there and that’s all that really matters right now. Afterwards I’m sure I’m going to take some time to take it all in, but that won’t happen until my fight is finished. I think MMA in Australia is going to explode after this card and I’m happy to be a part of it.”

With a big homecoming rapidly approaching and a crucial fight to reclaim his footing in the lightweight ranks on deck, Matthews is ready to jump start the next chapter of his career. He knows there is still plenty of ground to cover, but it’s a journey he’s excited to continue. That said, rather than think about what could materialize, he’s going to put every ounce of focus into each individual step it takes to get where he plans to go.

“I’m still a baby in this sport if you think about it,” Matthews said. “I’ve only been training for six years and there is still so much for me to learn. I could potentially get another 10 years or more out of my career and that’s almost twice as long as I’ve been fighting at this point. Thinking about what I’ve already achieved and what I could potentially achieve when I hit my prime is pretty exciting, but I’m not one to think too far beyond what I have directly in front of me. I take things as they come on a fight by fight basis.”