Matthews' enthusiasm for MMA higher than ever 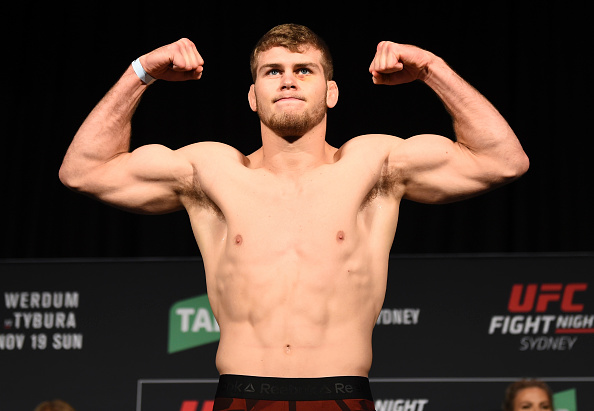 Jake Matthews of Australia poses on the scale during the UFC Fight Night weigh-in on November 18, 2017 in Sydney, Australia. (Photo by Josh Hedges/Zuffa LLC/Zuffa LLC via Getty Images)" align="center" />
Jake Matthews has seen and done a lot in just 23 years, and while he jokes that, “I'm not the young buck anymore,” in a way he’s right, because nearly four years growing up in the UFC will mature anyone at an accelerated rate.

Yet unlike many in that situation, Matthews has weathered the ups and downs and emerged not as a bitter or wary young man, but as the same gentleman he was when he started.

“My dad taught me to not try and be something I'm not, and that's all I do,” said Matthews, who fights Li Jingliang in a UFC 221 main card bout on Saturday (Sunday local time in Perth). “I just try and go out there and put the best effort I can in and then be the person that I am. If people like me, they like me, if they don't, they don't, but I'm not here to try and be fake or anything.”

That’s not as easy as it sounds, and Matthews admits that after arriving on the UFC scene with a bang after the Ultimate Fighter Nations series, as he finished his first two bouts via submission over Dashon Johnson and Vagner Rocha in 2014, he started to let success get to his head a bit.

“I had two big wins my first two fights in the UFC and then I got on the main card against James Vick and that time I got a bit of a big head and thought I had already won the fight and I was looking beyond it,” he said. “I got touched up and lost that fight, so that was a reality check and it brought me back down. Since then, I've been more humble. I realize I'm nothing special, I'm just your average guy who puts in hard work. And I'm just gonna go out there and give my best. It's good to have people around like my old man to keep me in check and bring me down a little. It's a little bit hard at the start, but you get used to it. I'm just your average guy, doing a job. That's all it is.”
MORE FROM UFC 221: UFC 221 Fantasy Fantasy Preview | UFC Countdown Full Episode

Matthews’ “old man,” trainer and father Mick, has done an impressive job raising his son as a fighter and a man. But as in anything, it all comes down to what happens when it’s time to perform. So while “The Celtic Kid” rebounded from the loss to Vick with back-to-back wins over Akbarh Arreola and Johnny Case, a pair of losses to Kevin Lee and Andrew Holbrook put the prospect at a crossroads, especially after hip surgery following the Holbrook fight in November 2016.

It was during that time off that he made some hard decisions, and in the process got his love for the game back.

“I couldn't train for about six months, so when I came back, it was almost like a clean canvas,” Matthews said. “You start from the basics again and build up the foundation, so it felt like I was starting again, not only letting the body refresh, but the mind as well. Sometimes you do something for so long you get stale and, starting again, I got all my enthusiasm back.”

With that new start came a new place to start in, or actually an old place, as Matthews went back to the welterweight division that he started his career in and where he ran off a perfect 6-0 record. So why did he begin his UFC career at 155 pounds and stay there for so long after having success at 170 pounds?

“When I first got into the UFC I was just 19 years old, so I was still developing,” he explains. “I had a small frame and just before I got into the UFC I went over to Albuquerque and stayed at Jackson's MMA with Kyle Noke for nine weeks, and I was training with all the lightweights and welterweights there and there was a big difference between the sizes. Even some of the lightweights were bigger than me back then.”

The lightweight experiment started out well enough, but a 2-0 UFC record eventually turned into a 4-3 one, and it was getting rougher each step of the way.

“As I got older, each cut got progressively harder, but I really didn't notice it until the last few, where it was really, really 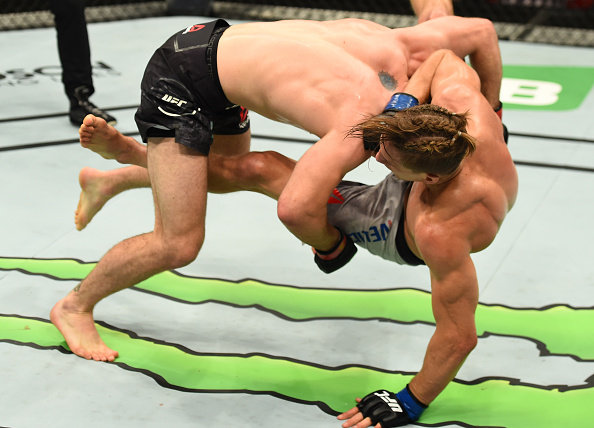 Bojan Velickovic of Serbia in their welterweight bout during the UFC Fight Night event inside the Qudos Bank Arena on November 19, 2017 in Sydney, Australia. (Photo by Josh Hedges/Zuffa LLC/Zuffa LLC via Getty Images)" align="right" /> hard,” he said. “And when your health comes into play and your doctor's saying you can't do this anymore, it's a punch in the gut and you realize you have to make a change.”

Last November, Matthews returned to welterweight and the win column with a hard-fought split decision over Bojan Velickovic. It wasn’t his best performance, but he’ll take the win, and more importantly, now he feels like he’s home again.

“This is where I'm naturally supposed to be,” Matthews said. “The last camp was awesome, fight week was awesome, and I was actually able to train. At lightweight, I didn't have the energy to push hard sessions out, whereas last time I was able to hit the pads hard all the way out to the day before weigh-ins, so mentally it's a good thing to be able to know that you can push and you have the energy. I don't have to be miserable all fight week, having to eat just salad. It's much better.”

And he promises this weekend’s performance will also raise the bar again, and if Matthews can fulfill his potential at 170 pounds, the division may soon have itself a new contender and eventually, a champion. That sounds about right for Matthews, who has always pictured himself following one of his fighting idols to the top of the welterweight class.

“I think the reason I fought welterweight when I was younger when I was so light was because my favorite fighter of all-time was Georges St-Pierre,” he said. “He was the guy in the welterweight division and whatever he was doing, that's all I wanted to do. And I've got that back again. He's still my favorite of all-time, he's obviously up a division right now, but what he did in the welterweight division, I used to watch his highlights all the time. If I wasn't training, I was watching Georges St-Pierre.

“So it excites me more being at welterweight,” Matthews continues. “I can look after my body better, I feel better going into the fight, which makes me excited because I know I can last the fight, I know I can train hard, and looking at the roster and the guys in there, anyone that's in the top 40, people know, and they're all dangerous. It keeps you on your toes and there's no pushovers in the UFC, so you have to really get in there and train hard, and that's what motivates me.”