Matthews different from athletes his age 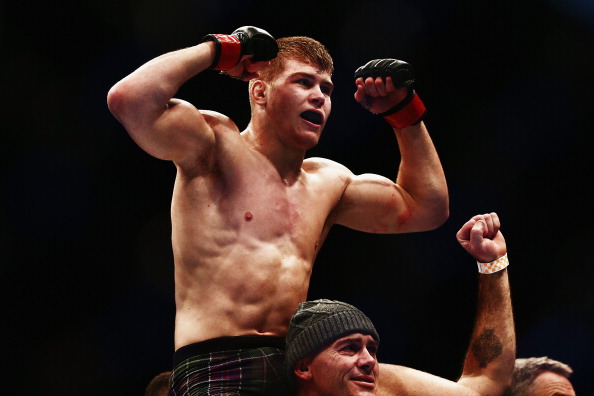 To make it to the UFC and have the talent and discipline to win three of four fights in the promotion by the age of 21 shows the maturity level Jake Matthews is dealing with. But it’s how he addressed the lone loss of that stretch – a May 2015 defeat to James Vick that marred his perfect pro record – that really shows the Melbourne native to be quite different from other pro athletes his age.

When talking about the decision loss to the unbeaten Vick, Matthews doesn’t blame injury, a bad training camp, or anything else. The way he sees it, it was all about the man in the mirror.

“I did buy into it a bit,” he said of the hype surrounding him leading into the bout. “It was not so much what people were saying, because people have said it before. It was more that it was my first fight ever on a main card, I was one of the youngest people to ever fight on a main card, I had a FOX Sports crew following me around doing a big documentary, and it sort of went to my head. I got a bit cocky and I thought I had the fight won. I thought I was gonna knock him out and get a big win bonus and all that. I sort of looked past him a little bit and let everything get to my head. But I learned my lesson now and we’ll never let it happen again.”


Matthews’ honesty is refreshing, and because of it, he hasn’t dipped too far on pundits’ top prospects lists. What helped was his return to the Octagon at UFC 193 last November, when he turned back a strong effort from veteran Akbarh Arreola and won via second-round TKO. The train was back on the tracks and moving full speed ahead.

“That was a massive win,” Matthews said. “Not only because I needed it because I lost in Adelaide, but just because of the huge size of the event, the exposure, and also fighting in front of my hometown in Melbourne. You always want to get the win in front of your hometown. So that was a huge fight for me to get the win in, and it was especially good to come back after the loss in Adelaide.”

This weekend, Matthews makes his first appearance of 2016 in his home country once more, as he battles fellow lightweight prospect Johnny Case in Brisbane. On paper, it’s one of the most interesting fights on the card, as both 155-pounders have a high upside in the sport. And while the bout didn’t need any extra heat to it, it got some anyway, as the two have engaged in some light-hearted social media gamesmanship on the way to fight night.

“We knew he liked to talk a bit of trash beforehand, and he started with me,” Matthews said. “And it wasn’t actually so much me, it was other people on my behalf doing it and my friends were getting on and doing it, so I just kept completely focused on training. I didn’t actually ever look at Facebook, so I don’t know if he thinks I’m on there and not training hard and just talking trash, but that’s not the case. But it adds to the hype of the fight, I guess. It never hurts. It’s all a bit of a fun, but I’ve never been one for trash talk. The boxer Kostya Tszyu always said that whether they talk trash or not, we’re gonna get in there and fight. And that’s what’s gonna happen. We’re gonna fight soon, and we’re gonna see on the night that all the trash talk doesn’t make a difference and doesn’t help you when you’re in there.”

If Matthews is looking for fistic heroes to emulate, the no nonsense Tszyu is a good one to start with, and like the former junior welterweight boxing champion, “The Celtic Kid” was thrown into the deep end of the pool early in his pro career. Matthews doesn’t mind though, as he’s right where he’s always aimed to be.

“I’ve always been focused on what I wanted,” he said. “I’ve seen other people that had the same dreams and went to fight in the UFC, and they’ll train here and there and go out and party on the weekend, and I just saw that they weren’t going anywhere. I’m lucky that I never enjoyed going out to clubs and doing all that. I just enjoy training, and I knew that I had to train hard if I was going to get to the UFC. I never wanted to have an average job, and that motivated me and kept me in the gym and kept me training. And I got here now, so I guess it all worked out.”