Jake Matthews is in a unique position as he readies to take on Emil Meek on Saturday night at Spark Arena in Auckland, able to be identified as both a prospect and a veteran, despite the fact that neither feels quite right.

“People look at me like I’m still the young kid, the up-and-comer, but when I look at it on paper, I’ve been there longer than pretty much anyone,” Matthews said of being both 25 years old and already a dozen fights deep into his UFC career. “I think the only other Aussie that is ahead of me in terms of longevity is Rob Whittaker.”

Matthews traveled a similar path to the UFC as the former middleweight champion, initially popping up on people’s radar as a member of Team Australia on The Ultimate Fighter Nations, where the contingent from down under squared off with a team of Canadian hopefuls. Though he was bounced from the competition early and initially returned to the Australian regional circuit, a quick victory as soon as he was cleared to compete pushed his record to 7-0 and two months later, he made his Octagon debut.

He was 19 years old at the time and has remained on the active roster ever since, compiling a 4-3 mark in seven lightweight contests before moving up to welterweight, where he has since gone 4-1.

While most competitors spend their early 20s gaining experience and cage time on the regional circuit, working out the kinks in quaint venues, far from the critical glare of fans and media, the bulk of Matthews’ “trial and error” period has taken place in the UFC, where the stakes are higher, expectations are elevated, and setbacks are looked at far more critically than when they happen on smaller shows in front of considerably fewer people. 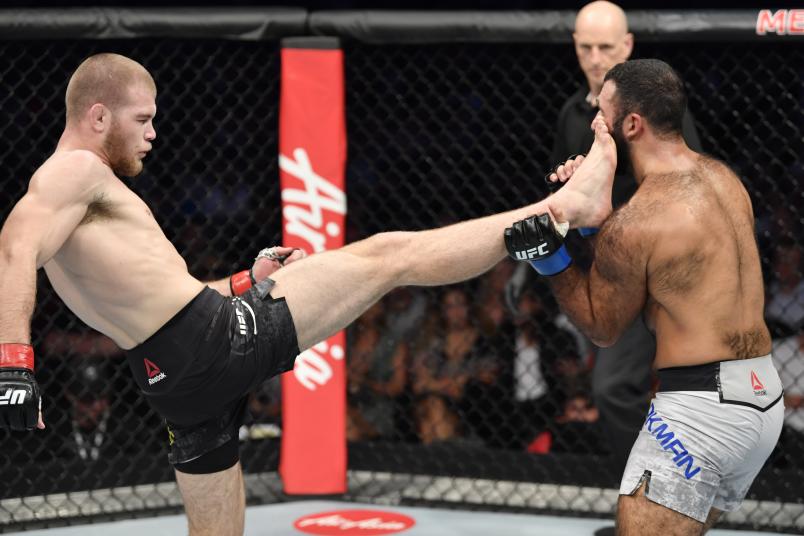 “Some guys have those learning curves outside of the UFC and that’s why some guys have a quick climb in the UFC because they’ve been doing it for so long,” said Matthews, who got back into the win column with a workmanlike unanimous decision win over Rostem Akman last November at UFC 243. “There are probably guys outside of the UFC who have been fighting for longer than I have, and when they get to the UFC, they’re very seasoned, had all that experience.

“I’ve had those learning curves inside the UFC. It’s not ideal, but I had a really good run when I was younger; I put some wins together,” added the Victoria-based fighter. “I’ve done well in the UFC, but that maturity hadn’t really come yet, which is why from the outside, it might look like I’m taking longer to get to the top ranks than other fighters, but it’s only because I got in younger than 99 percent of other fighters.”

Matthews’ use of the word “maturity” in describing what was missing early in his UFC run is fitting because both physically and mentally, he wasn’t close to being where he’s at today.

He started out as a 19-year-old lightweight whose initial training consisted of getting in whatever work he could with his little brother in the family shed, his father Mick steering their training. He was baby-faced and bubbling with potential, the way all youngsters are when they’re at the start of their careers and have not yet tasted the harsh realities of the professional world.

Everything about Matthews screamed “future contender,” but while his size, athleticism, and acumen on the canvas remained impressive for someone so young, that same youthful exuberance and relative inexperience cost him in critical matchups against future contenders James Vick and Kevin Lee. A split decision loss to Andrew Holbrook turned out to be his final appearance in the 155-pound ranks, and it is only since moving to welterweight that the maturation process has really started to show returns.

Not only has Matthews grown into his body, adding muscle and strength to the athleticism he exhibited at the outset of his career, but he’s starting to fight like someone who has figured out the best way to maximize his skills and reduce his risks inside the cage. After being a willing brawler, occasionally to his own detriment, for much of his career, Matthews took a more tactical, more measured approach to things against Akman last time out, coming away with a clean sweep of the scorecards and the opportunity to go out and celebrate following the event.

“That was very hard for me to do,” he said of dialing it back and letting the fight come to him against Akman. “You can probably hear my coaches telling me to pull back and calm down when I start getting a bit too excited.

“At the end of the day, I got the win, plus I didn’t have to go to the hospital, which was a good thing,” added Matthews. “I just got to go and celebrate with everyone.”

The shift was a conscious one, and although he admitted fighting against his natural instincts and getting comfortable with a new approach led to many frustrating days in the gym, Matthews knows it was for the best and is eager to build upon his return to the win column as he readies to kick off his 2020 campaign this weekend.

Although Meek wasn’t necessarily on his radar coming out of his victory over Akman late last year, the matchup with the popular returning Norwegian immediately appealed to Matthews.

“There is no way this fight is going to be a slow-paced, boring fight,” he said of the pairing with Meek. “As soon as I saw the name I was excited. 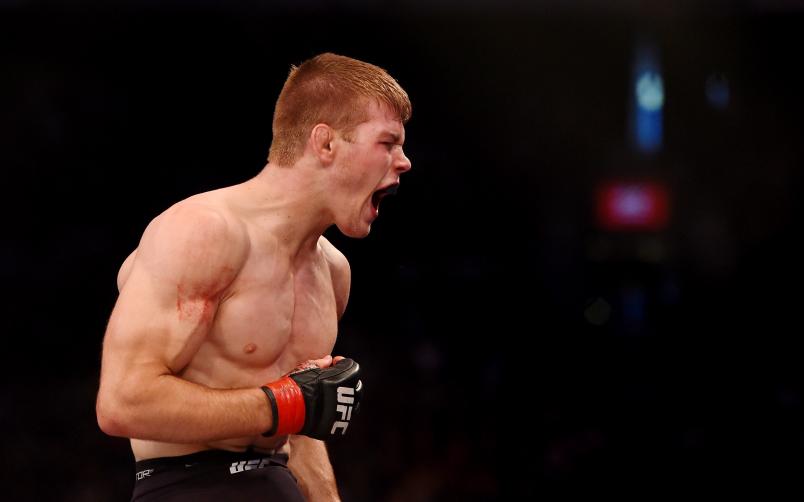 MELBOURNE, AUSTRALIA - NOVEMBER 15: Jake Matthews celebrates his win by TKO (doctor stoppage) against Akbarh Arreola (not pictured) in the second round of their lightweight bout during the UFC 193 event at Etihad Stadium on November 15, 2015 in Melbourne, Australia. (Photo by Josh Hedges/Zuffa LLC/Zuffa LLC via Getty Images)

MELBOURNE, AUSTRALIA - NOVEMBER 15: Jake Matthews celebrates his win by TKO (doctor stoppage) against Akbarh Arreola (not pictured) in the second round of their lightweight bout during the UFC 193 event at Etihad Stadium on November 15, 2015 in Melbourne,

FIGHTERS ON THE RISE

“It wasn’t one of the names I threw out there, but it’s a big name, and it’s going to be one of those fights like back when I fought Li Jingliang,” continued Matthews. “He’s one of those guys that is going to come out and make it a fight.

“The last fight was a bit more strategic, coming off a loss and a 10-month layoff, so I got in there and did what I needed to do. Now I’m back in the win column and I can unload a little more in this fight.”

Almost six years and a dozen fights into his UFC career, Matthews has still not yet reached his athletic prime or his full potential as a fighter, but with each subsequent appearance, the steadily improving Australian continues to get closer.

At 25, he’s still a prospect, but at the same time, he’s made the walk to the Octagon more times than anyone else on the card, save for the headlining duo of Paul Felder and Dan Hooker, which clearly makes him a veteran, although Matthews doesn’t actually look at himself in either terms.

Instead, he fancies himself more of a marathoner.

“My UFC career isn’t going to be a short, sharp sprint to the top,” he said. “I can take my time, draw it out, be smarter and try to get some longevity out of my UFC career. It’s been a good journey and I’m happy with how everything is going.”

“I got in there young, so, for me, this whole process is one big marathon,” he added. “The day is coming very soon where I’m going to make that run and get into the top ranks — Top 15, Top 10 — and build my way up.”