Matthew Semelsberger Is Ready For His Rite Of Passage

"Semi The Jedi" Prepared For Adversity vs AJ Fletcher This Saturday
By Gavin Porter, on Twitter: @PorterUFCnews • Mar. 10, 2022

The next time Matthew Semelsberger is about to fight, make sure your eyes are glued to the television.

In Semelsberger’s four UFC fights, he’s ended two of them by knockout in less than 20 seconds. The only other fighter in UFC history that’s done that is Anthony “Rumble” Johnson. That’s premium entertainment, folks, and Semelsberger is happy to deliver it.

In the process, he has loved the reaction that he’s received from UFC fans worldwide.

“It’s fun to hear everyone’s reactions from when I got those quick finishes,” Semelsberger told UFC.com. “I’ve been getting a lot of the same stories like, ‘Dude I was making a drink’ or ‘I was like heating up food in the microwave,’ then, boom, everyone is going crazy. [If they watched] They are super pumped about it, obviously, because they get to see the finish. When it happens really fast, I don’t know, there is something about a quick KO. Almost like the suddenness of it, it’s very exciting for people.”

Building a reputation as a fighter that ends fights quick is great and all, but it isn’t necessarily what Semelsberger is looking to accomplish with his career. He’s looking to challenge himself and find those moments where he gets to prove that he can battle through adversity. So when people start to consider him a flash KO artist, he can’t help but pump the brakes a bit.

“I don’t want to hard point it too much,” Semelsberger said. “I don’t want to trust too much in my ability to put people away early because this is the fight game, and you have to be ready to go all three.”

Getting out of a fight early and without taking damage is ideal, but the point that the 29-year-old welterweight is trying to make is that he isn’t heading into these fights expecting to spark guys off the bat. He’s ready for everything, including a three-round throw it down, duke em’ out-type brawl. And he believes his UFC Fight Night: Santos vs Ankalaev showdown with Dana White’s Contender Series alum AJ Fletcher is the perfect opportunity to showcase his skills for more than 20 seconds.

“I don’t see this fight going quick out of respect for AJ; I think he’s a tough guy and I don’t think he’s going to fold easily. Even if he takes a big shot, he’s shown that he has a chin and he can have some resolve, which is actually pretty exciting for me,” Semelsberger said. “I’m pretty happy about that because I want to showcase my ability to fight three rounds or fight back-and-forth, being the hammer and being the nail. It’s also just a rite of passage as a UFC fighter. You have to showcase the ability to press on, to face adversity and take over the fight.”

Fletcher has amassed a 9-0 professional record and trains with Dustin Poirier out in Louisiana. He’s a hot prospect and made it very clear that he was ready for the big show when he earned a UFC contract on DWCS with a flying knee KO. He’s a guy coming in with plenty of momentum and feeling confident, just how Semelsberger wants him to feel.

“AJ is undefeated, he’s been on a hot streak ever since he got into his professional career. There’s a lot of steam behind him and a lot of momentum. He’s young, he’s hungry and I can tell just from watching him that he’s game,” Semelsberger said. “He’s game to get into a fight but he’s also pretty technical with his work. I’m excited for it. He looks like a very solid fighter all around, whether he’s on the ground or on the feet, so I’ve been preparing for that.” 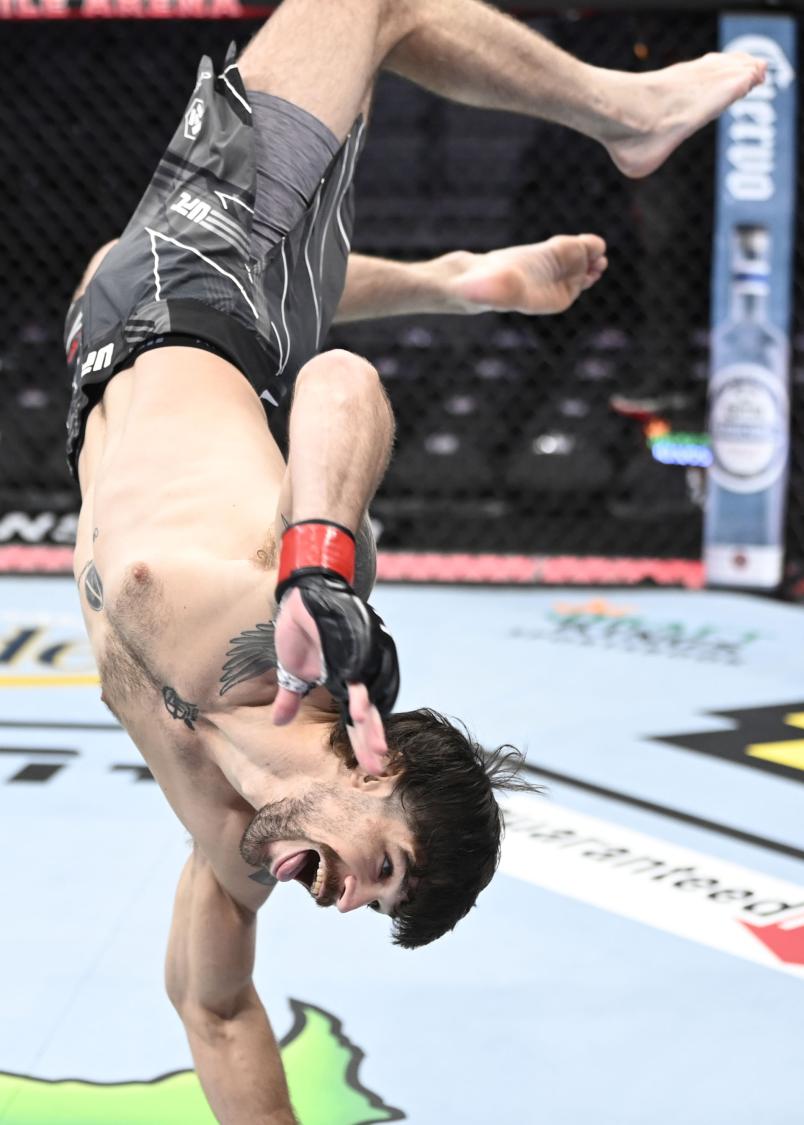 Matthew Semelsberger celebrates his win over Martin Sano in their welterweight fight during the UFC 266 event on September 25, 2021 in Las Vegas, Nevada. (Photo by Jeff Bottari/Zuffa LLC)

That was a learning lesson that “Semi the Jedi” took away and will apply to his fights as he continues to climb the welterweight ladder.

“Knowing where I’m at in my career, every fight is only going to get harder,” Semelsberger said. “I gotta keep upping the work, keep putting in the focus and the energy that I need to in order to keep climbing the ranks.”

Finishing Fletcher would give Semelsberger a chance to separate himself from the prospect pack at welterweight and start knocking on the door of the Top 15.

So, when Bruce Buffer is wrapping up his introductions on fight night, sit down and turn up the volume, because “Semi the Jedi” has intentions on putting on a show.