Matthew Semelsberger Is Ready To Prove Everyone Wrong

Matthew Semelsberger Lost His Amateur Debut, But Since Then He Hasn't Let Anything Come In His Way
By E. Spencer Kyte, on Twitter @SpencerKyte • Jun. 15, 2021

Matthew Semelsberger’s dreams of competing in the UFC started taking root when he was in the fifth or sixth grade.

Family friends had a cache of old VHS tapes and DVDs and ran a curious young Matthew through a quick history lesson, starting with Royce Gracie, advancing to Chuck Liddell and Forrest Griffin before reaching whatever pay-per-view the UFC was on at the time.

“I was like, ‘Oh my God! This is amazing!’” recalls Semelsberger, who makes his third appearance inside the Octagon this weekend in what should be an electric affair with fellow welterweight finisher Khaos Williams. “I was captivated and fascinated by what I was seeing and I was like, ‘I want to do this one day because I think it would be really cool to fight in the UFC.’”

Although he started training when he was a freshman in high school, another athletic pursuit took priority, as the Maryland native excelled on the gridiron. By the time he was wrapping up his high school years, Semelsberger had several different options at the next level, settling on Division I-AA Marist College in Poughkeepsie, New York.

He continued training and even took his first amateur fight during the summer between his freshman and sophomore years at Marist. 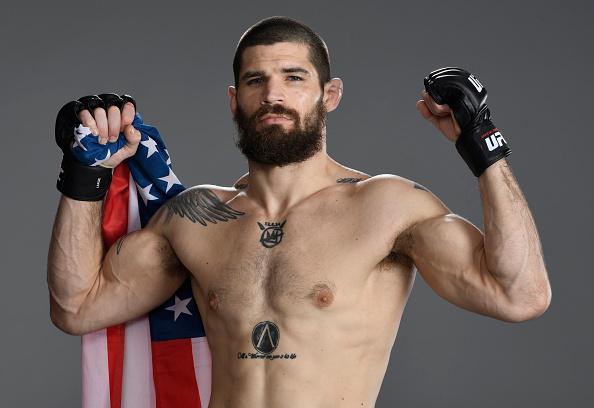 Matthew Semelsberger poses for a portrait after his victory during the UFC Fight Night event at UFC APEX on March 13, 2021 in Las Vegas, Nevada. (Photo by Mike Roach/Zuffa LLC)

“I was training, but I’m a college kid and I don’t know jack about MMA or the fight game at all,” recalls Semelsberger, who carries a five-fight winning streak into his clash with Williams on Saturday. “I had been messing around, not doing the things I needed to do in order to keep my body in good shape, and I went in and got my butt whooped by a super-tough dude, and it was a real eye-opener.”

Following the loss, he pressed pause on his amateur career and focused in on football before the tragic passing of one of his best friends prompted him to rethink his plans for the future.

Fight By Fight Preview: The Korean Zombie Vs Ige

“The summer going into my junior year of college, I had one of my best friends that I had ever known, Kurt Neubauer, die in a car accident a week or two before I went back to school, and that really f****** me up,” the 28-year-old explains.

Although the two had grown apart as even the closest of childhood friends can during those initial college years, Semelsberger and Neubauer had spent the summer working together, shuttling tiles and different flooring materials to construction sites.

“On our way home one day, we were having a heart-to-heart conversation about what our future goals were, what we wanted to do in life — one of those feel-good, optimistic conversations with one of your best friends, you know?” he continues, recounting the days in close proximity to his friend and the moments they shared. “We even talked about death and dying, and then lo and behold, the next day, he was gone.” 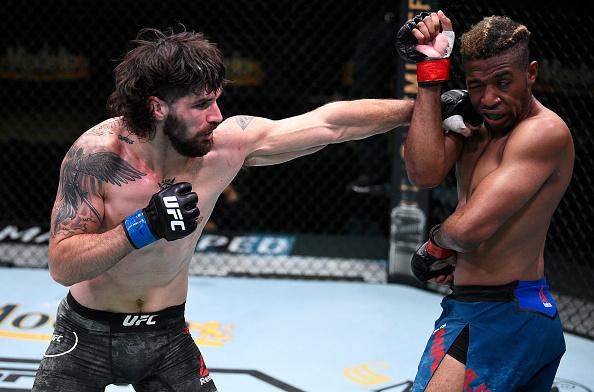 Matthew Semelsberger punches Carlton Minus in their welterweight fight during the UFC Fight Night event at UFC APEX on August 22, 2020 in Las Vegas, Nevada. (Photo by Chris Unger/Zuffa LLC)

The sudden, tragic passing of his friend prompted the introspective Semelsberger to begin pondering what he truly wanted to do with his life and if he was genuinely happy pursuing a degree in criminal justice. He still had football and the lure of mixed martial arts remained prominent in his mind, as well.

He returned to college and after his junior year, Semelsberger committed himself to chasing his NFL ambitions, remaining at Marist to work with his strength and conditioning coach throughout the summer in hopes of getting the opportunity to play at the next level. He made all-conference and had a really good year, receiving offers to play overseas.

While his efforts and play didn’t produce an NFL offer, they did show the now 28-year-old what he was capable of when he put all his focus into something, and with his football days finished, he was ready to shift his focus back to mixed martial arts full time.

Just 10 credits shy of receiving his degree, Semelsberger made the decision to drop out of school and chase another athletic opportunity, much to the chagrin of his coaches and parents, and much to the surprise of classmates that knew about his disastrous first amateur appearance.

“People at my college knew that I trained MMA, so I lose my first fight and I’m 0-1 going through the rest of my college career,” he recalls with a laugh. “I didn’t get a win until after I left college, so it was one of those things where people were like, ‘You’re leaving college and you’re 0-1?’ 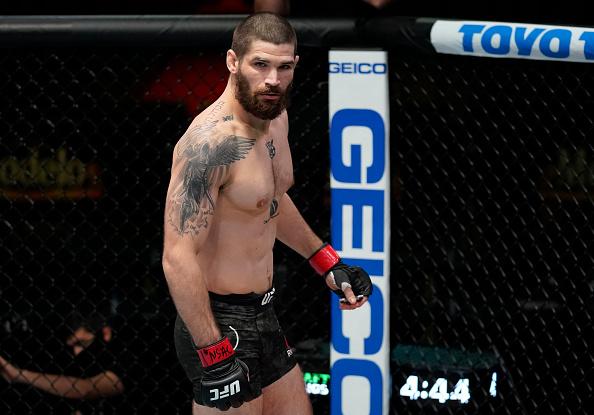 Matthew Semelsberger reacts after his knockout victory over Jason Witt in a welterweight fight during the UFC Fight Night event at UFC APEX on March 13, 2021 in Las Vegas, Nevada. (Photo by Jeff Bottari/Zuffa LLC)

Not only did they catch on, but Mike and Joy Semelsberger have become full-blown “Fight Parents” now.

“They’re very, very supportive,” Semelsberger says, the appreciation evident in his voice. “They’re a lot more excited now because I’m in the show and doing well, but they have always been supportive. Even though they were a little disappointed when I left college, I’m thankful for the parents I was blessed with because they love me unconditionally and I appreciate that a lot.

“Some parents may have kicked their kid out of the house when they dropped out of college and said, ‘I want to be a cage fighter,’ but they said, ‘If you show us you’re serious about this, you can have a roof to stay under.’

“My dad is super into the fight game now,” continues the man everyone calls “Semi the Jedi,” adding that it’s his father that gets ultra-nervous whenever he’s about to step into the Octagon.

MORE UFC FIGHT NIGHT: Aleksei Oleinik Will Never Give Up | Marlon Vera Fighting For A Better Life | Davey Grant Is Prepared For Any Obstacle

“The dude freaks out,” he admits with a laugh. “My mom is a bit calmer — she’s the one telling him to shut up. I think it was my first fight against Carlton (Minus) — he was freaking out, going crazy, and she was just like, ‘If you’re going to freak out, just go in the other room and don’t even watch.’”

Last time out, Semelsberger made sure his dad didn’t need to be nervous for too long, as he marched into the Octagon and put away veteran Jason Witt with a counter right just 16 seconds into the fight.

Saturday night, he looks to make it three-for-three in the UFC when he steps in with Williams, a thunder-fisted Michigan native who had his eight-fight winning streak snapped by Brazilian Michel Pereira last time out.

“I knew about Khaos,” Semelsberger says excitedly when asked about his dance partner this weekend. “I had been following Khaos before we even got matched up because I’m a fan of his style; the dude hits like a friggin’ truck.”

He recounts a moment following his debut victory over Minus where someone had tagged him on social media suggesting that a matchup between he and Williams would be fire, with his immediate reaction being to get another win or two under his belt before stepping into the cage with the hard-charging, heavy-handed “OxFighter.”

After dispatching Witt in quick fashion, he felt he was ready for a step up in competition and to test himself against someone dangerous; someone like Williams.

“I do my best work when I’m under that kind of pressure — when I am the underdog, when I’m in there with another beast — so it’s a very exciting fight for me,” he says of the pairing, which is dripping with “post-fight bonus” potential. 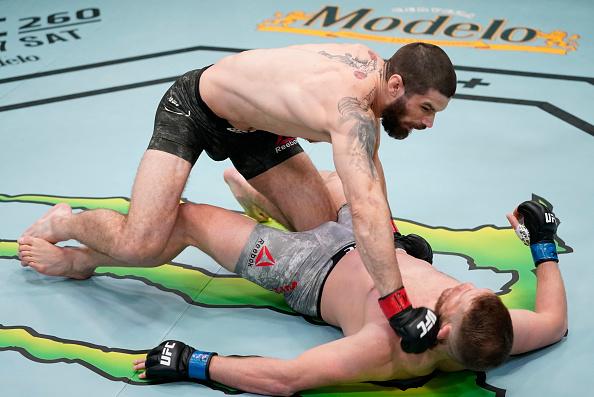 Having watched Williams closely as both a fan and knowing he could one day be a future opponent, Semelsberger is acutely aware of the threats his 27-year-old adversary brings to the Octagon with him this weekend, and while he’s fully intending to go out there and give the fans their money’s worth, the plan is to do it all on his terms.

“I’m not expecting anything, but I am intending to do some things,” begins the contemplative welterweight. “I’m intending to entertain the people watching, which is something that is very much at the forefront of my mind — being an entertainer and doing what I’m paid to do.

“I’m not afraid to go in there and get reckless and gritty and get into a dog fight, but I’m going to do it on my terms. I’m going to make him fight my fight.”

A little more than six years after walking away from school to chase his dreams, Semelberger stepped onto the biggest stage in the sport for the first time.

A little more than four months after making his debut, he registered a second consecutive win and his first stoppage victory inside the Octagon.

Now, barely 10 months after making the walk for the first time, he’s set to march to the Octagon for a third time, riding a five-fight winning streak, entering into a matchup where a victory would instantly establish him as one of the top emerging talents in the ultra-competitive welterweight ranks.

Not bad for someone that lost his amateur debut and spent his final three years in college with everyone thinking he was that guy that says he “trains UFC” but can’t fight worth a lick.