Matthew Semelsberger Brings All The Ingredients

Welterweight Puts It All Together For UFC 266 Prelim Bout This Saturday
By Steve Latrell, on Twitter: @TheUFSteve • Sep. 22, 2021

Matthew Semelsberger was planning to take a little bit of time off to focus on skill development coming off his first UFC setback in June, but plans quickly changed when the call came through to compete this weekend at UFC 266 at T-Mobile Arena in Las Vegas.

“As soon as they said, ‘266,’ I said let’s do it,” recalled Semelsberger, who squares off with newcomer Martin Sano early on Saturday’s preliminary card. “At first we were thinking about taking this teensy little break before coming back with a bang, but I’m happy we took this fight because it’s 266 and on a live card, which is what really drew me into it because I haven’t gotten to fight in front of a crowd yet for the UFC.”

Hearing Semelsberger say those words — “I haven’t gotten to fight in front of a crowd yet for the UFC” — was one of those instances where even though I knew the information is true, I had never really thought of it in those specific terms and what it means for him and his contemporaries who have spent the last 18 months competing always exclusively in venues devoid of fans.

But for the 28-year-old welterweight and so many others that were signed and have debuted during this “Pandemic Era” in the UFC, they’ve yet to experience the feeling of walking out of the back, pushing through the curtains, and hearing their friends, family, and everyone else in the arena pop as they make the walk to the Octagon.

And experiencing that is something that means a lot to Semelsberger, both in terms of career milestones and getting him further locked in for his impending fight.

“I honestly feel like I compete better when there are crowds there,” began the former collegiate defensive back for the Marist Red Foxes. “When I was fighting regionally or even thinking back to football, the fights and the games that were packed and loud and the energy was there, that’s when I thrive. That’s when I’m like, ‘Let’s f****** go!’

“I have a lot of milestones that I’ve set for my career, but one of the biggest ones was my first UFC fight in front of a crowd. I used to envision this all the time when I was out shadowboxing with my porch light on — I would just close my eyes and think about walking out from the back and down that walkway, into my first UFC fight with all of my friends and family there to watch me.

“I’ve been doing that for I don’t even know how long, and knowing that is about to become a reality, that moment is just going to be…” said Semelsberger, his words trailing off into a whisper as he searched for how to describe the feeling.

“The fact that I’m there and I’ve reached that goal and that milestone, coupled with how much that means to me and my family and my friends and everyone that has been involved in this journey — I can’t even put it into words.” 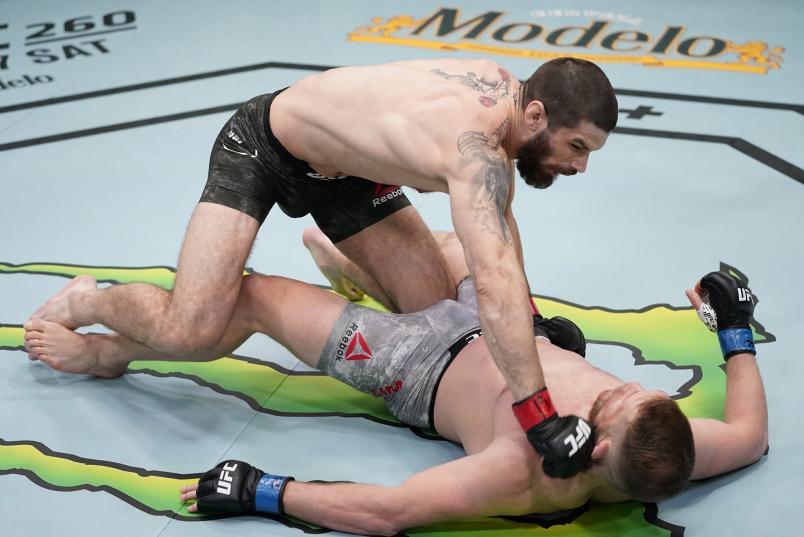 It’s a journey that began in earnest towards the end of his days at Marist, when he opted to leave school in order to pursue his mixed martial arts dreams professionally after training since high school and losing his first amateur fight.

And it’s one that has gone quicker than even Semelsberger may have imagined, as he reached the UFC with just eight professional fights to his credit and a 6-2 record.

While he’s certainly happy to be competing on the biggest stage in the sport at this early stage of his career, the contemplative and articulate Maryland native is also acutely aware of the fact that he’s still a work in progress and very much in the developmental phase of his fighting career.

“I’m still relatively inexperienced,” started Semelsberger, who earned a 16-second knockout win over Jason Witt in March before dropping a unanimous decision to Khaos Williams last time out. “From an athletic perspective and a sports perspective and a competitive perspective, I have all the experience in the world because I’ve competed my entire life, so that I’m used to.

“But the adjustments? Even in football, I relied on instincts and that’s how it was for a lot of my fighting career until now; I fought purely off instincts.”

Coming out of the fight with Williams in June, Semelsberger and his coaches recognized that while they were doing all the required work with specialists in individual disciplines — striking, wrestling, jiu jitsu — not enough time was committed to blending those skills together.

“I have all the tools that I need and I’m sharpening them up every day, but I just feel like I haven’t in the past done the greatest job of bringing all the ingredients together,” began Semelsberger, whose coach, Jon Delbrugge, often makes the analogy with baking a cake, one that anyone that has ever ventured into baking will agree with wholeheartedly. 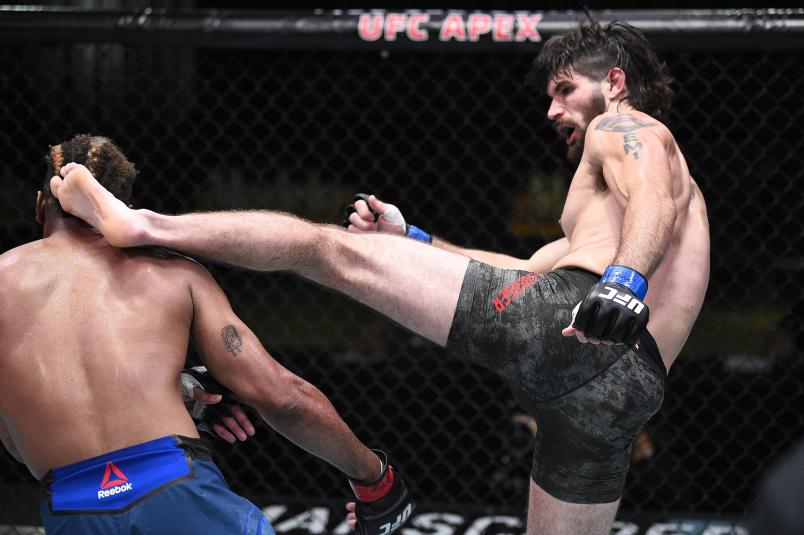 Matthew Semelsberger kicks Carlton Minus in their welterweight fight during the UFC Fight Night event at UFC APEX on August 22, 2020 in Las Vegas, Nevada. (Photo by Chris Unger/Zuffa LLC)

While cooking can be free form and doesn’t necessarily require strict adherence to a recipe or measurements, baking is about precision and accuracy — the right ingredients, the right measurements, added in the right order, at the right time.

Even if you have everything you need on the counter in front of you, there is still the potential to fail or come out flat, simply because you haven’t put everything together properly.

“Last fight, I didn’t bring enough ingredients,” Semelsberger added, “but this fight, I plan on bringing all the ingredients we need to bake up something real special.”

When he makes the walk on Saturday night, Semelsberger will stand across the cage from Sano, a 30-year-old newcomer with a 4-2-1 record fighting for the first time since early 2017.

Some have questioned how such an inexperienced fighter, one that has been on sabbatical for the last four years and change, can get the opportunity to compete inside the Octagon, and wondered aloud if he has the skills to compete at this level, but Semelsberger is approaching this weekend’s contest with a completely different mindset.

“I know he trains with Nick Diaz, so obviously he’s with a very good team; one of the best teams in the world,” he said of Sano, who has served as the elder Diaz Brother’s main training partner for the last few years. I don’t know much about him, but he’s been around for a bit and he’s 4-2-1, so he has some experience.

“For all I know, this guy could have been grinding and training for the last four years since he last fought, with the Diaz Brothers, so I’m preparing for a dogfight,” Semelsberger added with a laugh, acknowledging that he always preps with the idea of facing the absolute best version of his opponent in mind. “I’m preparing for the hardest fight of my life.”

That said, after suffering his first loss and finally getting to make the walk in front of a raucous crowd at T-Mobile Arena on Saturday — a crowd that will finally include his parents and plenty of additional friends and family — “Semi the Jedi” is ready to go out there and deliver the best performance of his career this weekend.

“We’re taking everything up to the next level and I’m coming into this fight with my full Jedi get-up this time,” he said. “Not only do I have the physical, but I’ve got some Jedi Mind Tricks to play with, too.

“In terms of where I’m at mentally and with my confidence, I feel like I’m going to run straight through this m*****f*****.”