Read on for the latest installment in
UFC.com's weekly series of articles on proper nutrition from the biggest
names in mixed martial arts...this week, Matt Serra 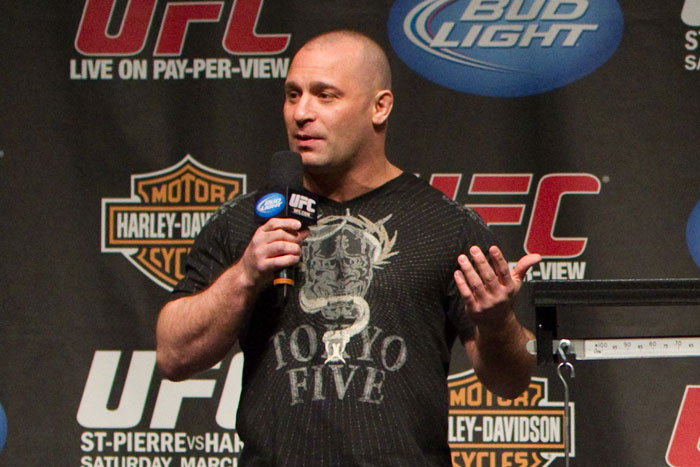 Pass the pizza and the pasta; Matt Serra is in the house. The 38-year-old former UFC champ has been living the good life of late, taking two years away from the Octagon to enjoy family life and teaching at his Brazilian jiu-jitsu academies in the Empire State. I caught up with the affable fighter for a chat about diet, the word “retirement,” his new “Fight Camp Insider” blog on UFC.com, and what struck him most during a candid visit with Chael Sonnen leading up to UFC 148.

UFC: Tell me about growing up in the Serra family and the kind of meals you were raised on.
Serra: Well, I’m one of five siblings. My father was a New York City police officer and my mom was a stay-at-home mom. We basically grew up on pasta, sometimes steak or pork chops … pizza was always there, too. We ate pasta and everything in the pasta family – tortellini, ravioli, lasagna, all of it. That was just the way it was and it was delicious.

Did you grow up wanting to be a police officer?
I mean, what do you do when you’re a young, gung-ho kid and you think you’re tough? You go into the military. I thought of being a cop and I thought about going into the Marines but then an incident happened where I couldn’t go into the Marines. And then thank God I found Renzo Gracie and Brazilian jiu-jitsu.

Your mentor is the great Renzo Gracie. Has he ever shared the Gracie Diet with you or advised you to try it?
(Laughs). I think there is a Gracie Diet and then there’s The Renzo Gracie Diet?! I don’t think they’re the same thing! (laughs uncontrollably). No Renzo does the right thing when he has to. Me and Renzo have broken bread before!

You showed up at the Team Quest gym in Portland to interview Chael Sonnen with coffee. Are you a big coffee drinker?
Yeah, I love coffee. Now you’ve got me thinking about it so I’ve got to stop off at a 7-Eleven to get coffee. When I’m training I’ll drink a coffee or an espresso. When I’m teaching I’ll take a little espresso or a coffee … You never want an instructor without enthusiasm. I don’t want to be dragging.

Heaviest weight you’ve ever been?
I don’t know, man, a little bit over 200.

Now you get playfully ribbed a little here and there about packing on a little weight, especially by Dana White.
Dana is a character. I think sometimes he battles it (the bulge), too (laughs). He’s taller than me so it holds it well. The one Dana uses every time, ‘You look like you ate Matt Serra!’ That’s his favorite one. He uses it every time.

You did get to visit Chael Sonnen leading up to his mega-fight with Anderson this Saturday. What stood out about that experience for you?
What stood out was that I saw the guy behind the guy. It was less for the cameras and I saw a different side of him and that wasn’t a bad thing to see. A lot of people just see the guy that is doing the old shtick, you know what I mean? I’ve heard him say things about guys that I respect and admire – the Nogueira brothers, Wanderlei Silva – and I don’t blame those guys for wanting to kill him. But at the same time, personally dealing with him he was nothing but a gentleman.

We see a lot of fighters nowadays who are becoming super-conscientious about what they eat? Where do you fall on that spectrum?
(Laughs). Man, well, it depends on what you’re talking about. If I have a fight coming up … Especially now; I don’t know when I’m fighting again or if I’m fighting again. But if I’m fighting I’ll have brown rice, quinoa, chicken, turkey … I eat clean, man. I will measure out my food every three hours and I eat five times a day.

But if I’m chilling out and hanging with family and barbequing – that’s a whole ‘nother menu.

What does the I-don’t-have-a-fight-coming-up Matt Serra eat?
I might start the day off with some maple brown oatmeal with some Grapenuts in it. I’m not a big breakfast guy. I might grab a protein bar and I don’t normally eat a lot during the day because I’m teaching at my school and I don’t want to feel bloated. So I’ll eat a protein bar or have a shake here and there. But at night is where I get in trouble. I’ll either have a turkey or a veggie burger, or my wife will make pasta or pizza. I can be that guy as well, for sure.

Your wife is Italian as well, right?
Yeah, my wife is Italian as well. I got a throwback with that, I’m lucky. Her father, Ciro, is right off the boat. He came over here when he was 21. He was one of 10 so it’s a big family. So they tend to do it up with the food every holiday. Do you know what gnocchi is? It’s delicious! But it’s heavy as hell! They make that homemade gnocchi. Even when they barbeque they take the bread and soak it in the olive oil and wine. They put that on the barbeque, man, it’s nuts.

Your favorite, go-to-dish is … If you’re stuck on an island what’s the one food you must have?
Something really healthy like broccoli! Are we really doing the stuck-on-an-island thing?! No, I’m going to say pizza, to be honest with you.

You interviewed Chael Sonnen recently for a UFC.com blog and hit his pizzeria, “Mean Street Pizzeria.”
I mean, it’s not a New York pizza, but it was good.

Have you ever thought about opening up a pizzeria?
When I was 17, for a couple of years I delivered pizzas. So I saw what it takes and it’s not something I really want to do. But it was cool. I can hang out at a pizzeria all day but I don’t feel like running a joint.

So you got free pizzas all the time as a teenager?
Oh yeah, all the time. When I was 18 I fought in a Toughman contest and they introduced me as “A Weightlifting Pizza Boy.” I’m not sure what that means …

How did you do in the Toughman competition?
Yeah I fought three times in an hour and I knocked the first two guys out. Mr. T was actually the referee. It was at The Palladium in Manhattan. They showed a clip of it on the nightly news. I took a beating in my last fight. I didn’t have any headgear on … I weighed about 175 pounds and fought at 175 and above, so that was kind of crazy.

With the exception of the flyweight (125 pounds) and bantamweight (135) divisions, there aren’t many short and stocky fighters ruling weight classes in the UFC. Yet you’re a former UFC champ. We don’t see a lot of smaller guys able to win a title at 170 pounds. How did you make your frame work for you?
With my body type, people always say I have to watch out because the other guy has long limbs. But it could be a disadvantage for me if the other guy uses his range the right way. But if I work my way in, say, using my triple jab on the way in, and then work on going to the body and then upstairs to the head … then I’m OK. And you have to remember that my opponents are punching down on me. So when I work my way in, unless they’re throwing uppercuts or a knee – even if I get hit on top of the head – it’s hard to get my chin because it’s tucked. It’s kind of like a turtle in a shell. And I can be devastating because I have power.

I’ve been smart – I’ve waited until the end of my career to get into (slugfests). So my chin is still intact and I’ll be leaving the sport with my chin.

You’re 38. Where are you at this point in your career and who would you really like to fight before calling it a career?
Man, my thought right now, I really enjoy 1) spending time with my 2 kids and family and 2) teaching classes at my school. To come out and say you’re going to retire is so official. Now, if MMA became legal in New York next month, and I’m still able then I would love to fight on that UFC card. That would excite me. But I don’t just feeling like jumping in there and fighting just anybody because I’ve got other things to do. I don’t want to do it just to do it. I want to have that passion for it. As of right now I have nothing on the radar, and there’s nothing planned, and I’m fine with that. But if I could choose my last fight it would be against Matt Hughes at Madison Square Garden. That would be a beautiful thing. He (Hughes) has expressed interest in that fight on Twitter so I was like, ‘Let’s do this.’

I’ve had the belt already so everything else is just gravy, you know? You don’t want to be greedy … I had a meeting with Dana (White) and we talked about things. He was saying, just knowing that if I make it official and I’m done, and I’ll never have that feeling again of stepping into the Octagon again, never have that high of being in the Octagon … He said, ‘It’s like telling a woman that she’ll never have another baby again. I get it.’ We had a nice talk but I can’t give a definite answer. As of right now I’m fine just doing what I’m doing.

BJ Penn has said before, ‘When I’m done fighting I’m going to teach BJJ, not MMA.’ Are you of a similar mindset? Why do you prefer teaching BJJ as opposed to MMA?
You know I’m glad you brought that up. I had cards made up that said ‘Serra MMA.’ But jiu-jitsu changed my life. I love jiu-jitsu. It’s my therapy, it’s in my blood. I love all martial arts. I mean, I have more knockouts than I have submissions in the UFC and I’ve done damage on my feet with some very good fighters. But if I can get a few rounds of sparring in versus a few rounds of rolling, I’ll choose the rolling. I’ve seen jiu-jitsu change lives. It can help a crowd of kids getting bullied, or kids that never had confidence, or women … The truth is that I like teaching average people even more than teaching guys that are fighters.