Matt Schnell Is Focused On Wins, Not Statements

Matt Schnell didn’t plan on spending more than a year out of the Octagon after his loss in Busan, Korea, to Alexandre Pantoja, but that’s how things shook out for the Louisiana native. He was scheduled to return in late-2020 before being forced to pull out of his fight with Tyson Nam, and so the two rebooked their date for January 20 on Fight Island.

It hasn’t been all bad, though. In February, Schnell and his wife Morgan welcomed a daughter to the world.

“Being a daddy has been fun,” Schnell told UFC.com. “It’s been great. Obviously, twists and turns, things you can’t anticipate, but so far, it’s been great. I love my little girl, and I think me and my wife have grown closer through trying to bring her up, and we’re all learning things every day. That little girl – she’s something else.”

"I'm not looking to make a statement, I'm looking to get a 'W' so we will go out there and do what we need to do." - Matt Schnell (@DANGER_Caged) talks about putting it "all on the line" against Tyson Nam at #UFCFightIsland8 🔊⬆️#InAbuDhabi | @VisitAbuDhabi pic.twitter.com/KvqGtP6hYC

Although the loss halted his momentum in the ever-growing flyweight division, he is eager to remind people of his ability.

“Sometimes, you let things get away from you,” Schnell said. “You allow yourself to get emotional. You get caught up in the moment. What’s great about fighting is nothing is irredeemable, so I’ve got to get back out there and try to put these hands on this young man. I feel good about things. I’ve been training, and I know I’ve been out for a while, but we haven’t forgotten how to fight. I assure you that.”

Against Nam, Schnell faces a veteran of the regional circuit coming off two knockout wins in 2020 who has a propensity to stand and bang. One could assume it’s a fight that’ll allow Schnell to flex his karate black belt or his ground game, depending on where he takes the fight.

Find Out How To Watch UFC 257 From Your Country 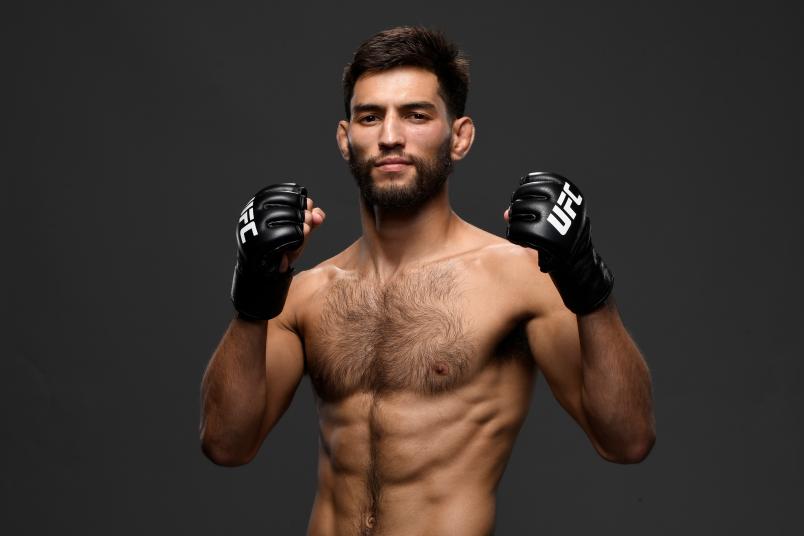 Matt Schnell poses for a portrait backstage during the UFC Fight Night event at the Prudential Center on August 3, 2019 in Newark, New Jersey. (Photo by Mike Roach/Zuffa LLC)

“He’s shown that he is difficult to put away and that he’s game and capable everywhere,” Schnell said. “He’s got a great first reaction to takedowns and looks to be pretty strong and physical and, obviously, he’s a puncher. That’s all something to take into consideration, but I feel like my tools stack up well against his, and I think I’ll be able to do well.”

While flyweight is fairly open season in terms of the title picture once Deiveson Figueiredo and Brandon Moreno sort out their business, Schnell is more focused on the result than making a loud announcement about himself.

“I’m not looking to make a statement,” Schnell said. “I’m looking to get a W. We’ll go out there, and we’ll do what we need to do. If I have to take him down and lay on him for 15 minutes, that might just be what happens, but I don’t anticipate that’s what’s going to happen. It should be a good fight. It’ll be competitive, and I’m going to go out there and put it on the line as always. I think my body of work speaks for itself, and I’ve had some curious performances, but I’ve had some good ones too, and I’m one of the best guys out here.”

At No. 9 in the rankings, Schnell isn’t far off from bursting into the title picture and responding from a setback isn’t foreign territory. After dropping his first two UFC fights, Schnell went on that aforementioned four-fight winning streak, and on January 20, he has the chance to do the same.

“I got a real skill set,” he said. “I’ve been doing this for a long time my own self, and when I go in there and things click for me, it looks good.”

Watch UFC Fight Night At A Special Time This Wednesday: Prelims Begin At 9am ET, Main Card at 12pm ET