After some early lumps in his UFC career, Matt Schnell made the neccessary adjustments to put himself back on track.
By Thomas Gerbasi • Aug. 2, 2019

Back in 2012, if you turned on MTV, there was Snooki, The Situation, and Danger. One of these people was not like the others.

Matt “Danger” Schnell, who starred on the series “Caged,” is far removed from his early days on reality television.

“It does feel like a hundred years ago,” he laughs. “It was another lifetime.”

Since then, when he introduced himself to the world while making his way through the amateur MMA ranks in Louisiana, Schnell made the transition to the pros, competed on The Ultimate Fighter, and logged five fights in the UFC on the way to a place in the flyweight top 15 and a meeting with Jordan Espinosa this Saturday in Newark, New Jersey.

He may very well be the most experienced 29-year-old – in and out of the Octagon – in the sport.

“It’s hard to call myself the most experienced, but I feel as if my body of work speaks for itself,” Schnell said. “It’s not been an easy ride either. Along the way, I’ve had my fair share of ups and downs and it wasn’t a straight line. It’s not like I did ‘Caged,’ then won four fights and walked through the UFC. I stumbled out of the blocks a little as a young professional, as much as I did in my early UFC career. But I got my feet underneath me and I feel like I’m getting my feet underneath me now.”

To say it wasn’t a straight line to this point is quite the understatement. With the eyes of the MMA world on him thanks to his time on MTV, Schnell staggered to a 3-2 start to his pro career before running off seven consecutive wins that earned him a spot on The Ultimate Fighter 24. With a shot at the UFC flyweight title up for grabs, Schnell won his first bout on the show over Matt Rizzo before a quarterfinal loss to eventual winner Tim Elliott.

It was disappointing, but Schnell would get a shot in the UFC. Then it got more disappointing, as was knocked out in his first two UFC bouts by Rob Font and Hector Sandoval. And while the loss to Elliott on TUF didn’t count on his official record, to the Shreveport product, it was three losses in a row and he was crushed.

“Of course, there were doubts and many dark days,” Schnell. “You get yourself used to winning, and then it seems like you pick up an L and then you pick up a couple Ls in a row, and that never happened to me and it was difficult to deal with. I’ve lost in the past but I’ve always bounced back. And I dug myself into a ditch there. I lost three in a row and it broke my heart. I feel like I scratched and clawed my way back to this point, but it was difficult to deal with. So there were doubts and hard times, but my loving wife and my family and the guys at my gym helped pull me through.”

With his back firmly against the wall, Schnell scored his first UFC win over Marco Beltran in October 2017. Then he beat Naoki Inoue eight months later, and in March, he submitted Louis Smolka. “Danger” was back. But don’t call it a comeback, says Schnell. He’s been here for years. 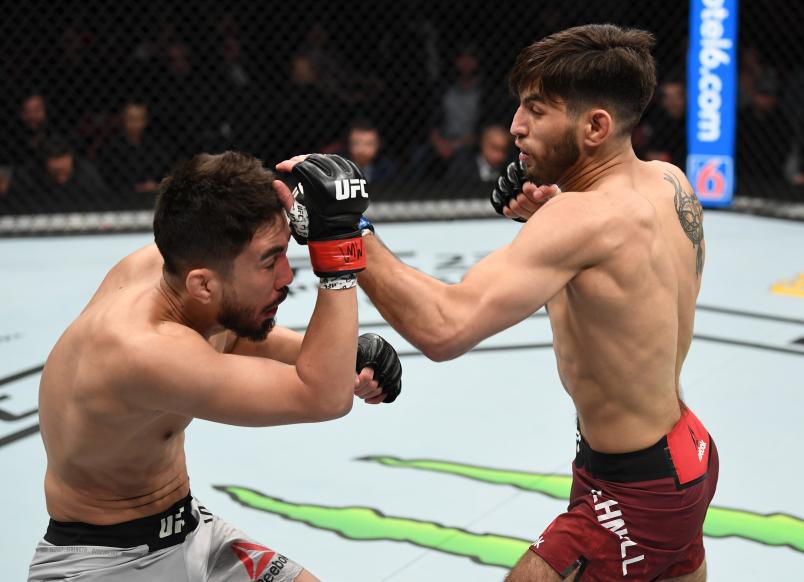 “I don’t think I went anywhere,” he said. “It wasn’t working out perfectly for a little while and I took my lumps, but we straightened things out. Not only have I not gone anywhere but I don’t plan on going anywhere anytime soon. I want to be a UFC fighter and I’m gonna do whatever’s necessary to go out there and win some fights.”

It’s the attitude of a fellow Louisianan named Dustin Poirier. The road of “The Diamond” was rocky at times, but he stayed the course, weathered the storms and now he’s got a shiny gold belt in his house.

“That dude’s my hero,” said Schnell of Poirier. “He’s paved the way for me every step of the way. We can talk about how our careers have kind of been parallel to one another, but Dustin’s been in the UFC for a long time and I’m just getting started in the UFC, so though our paths are similar, they’re quite different as well. But I do look at Dustin, I look up to him and I tell people all the time, we’re friends, me and Poirier, but whether or not we’re friends, he’s my favorite fighter, and I mean that.”

What a story it would be for the two Louisiana standouts to be in the record books as UFC champions. Schnell wouldn’t mind that scenario, but he’s not sure if that’s the end goal at this point.

“Every step you take, there’s just another one next and I’ve never felt that it was time to stop and smell the roses,” he explains. “I never felt that opportunity to exhale and say, ‘Look at what I’ve done.’ To be perfectly honest, I don’t know if the belt would bring me that satisfaction, either, and I guess we gotta get there first to see. But right now I’ve got Jordan Espinosa in front of me and all I can think about is the satisfaction of getting the W over him.”

As for that future after Saturday, Snooki and The Situation made a return to MTV; could “Danger” make a similar comeback to the small screen?

“Maybe I’ll start a country music career,” he said. “A lot of people don’t know I can sing, I can dance, I can cook, I can clean, I can do it all.”

It’s hard to argue with him.