“I bring leather just about as hard as anybody in the UFC.” - Matt Mitrione 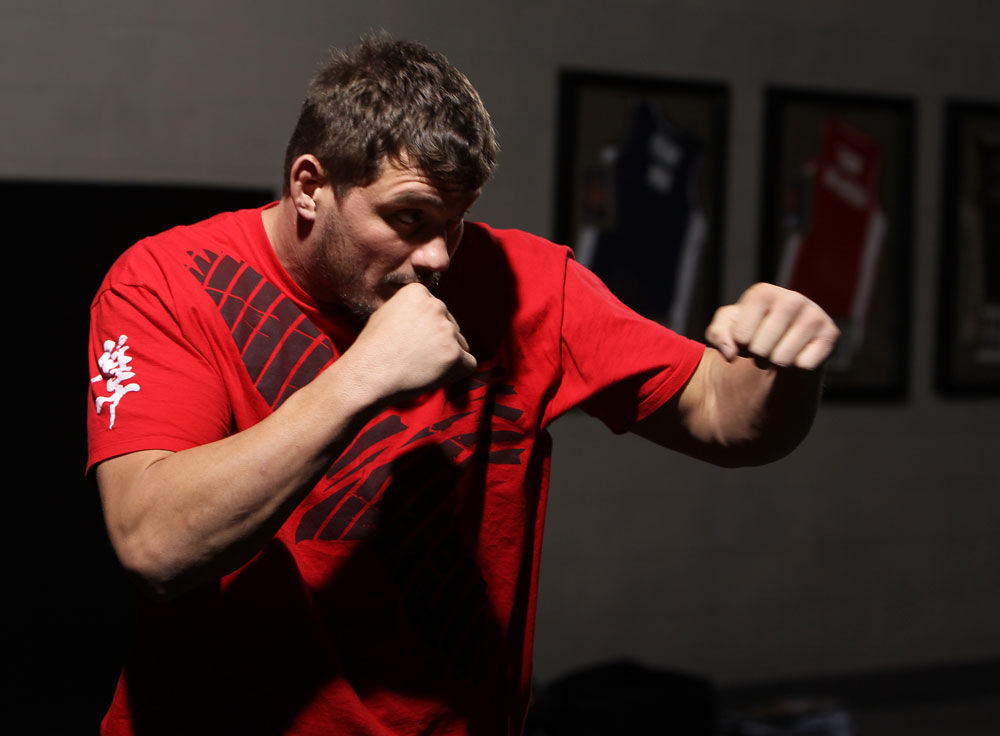 Days before the big stage get-it-on that will reveal if he can handle “the crème de la crème” of heavyweights, the talking machine that is Matt Mitrione is as chill and conversational as ever. It’s late Sunday night and the Indianapolis-based father of three is winding down after spending much of the day celebrating the birthday of his six-year-old son, Jacob (the highlight being a family trip to the chaotic kiddie paradise that is Chucky Cheese).

“We’re going to cap it at three kids,” Mitrione assured.

For the uninitiated, one of Mitrione’s gifts to the world is his hyper-candor. The former NFL defensive lineman (New York Giants, Minnesota Vikings) seems willing and able to tackle any topic. You could throw him on CNN, for serious query, and he’d probably be compelling. Then you could throw him on the Howard Stern Show, under an outrageous and unpredictable line of questioning, and he’d likely prove even more entertaining. So, over the course of a 45-minute talk, The Ultimate Fighter alum indulges my curiosity and we spend quite a bit of time talking about things that have nothing to do with the super-ripped 6-foot-4 Frenchman that promised to knock him out this Saturday night in the UFC 137 co-main event.

I ask: “Which current NFL players do you think have the temperament and physical skills to be elite fighters?”

(Note: Deep down, fervent Baltimore Ravens fan that I am, I was hoping the name Ray Lewis would arise on Mitrione’s list).

Alas, the man who proudly calls himself “Meathead” promptly disappointed me.

“I think Jeremy Shockey would be a fantastic fighter,” Mitrione said of the two-time Super Bowl-winning tight end, who possesses a well-documented mean streak on the field and was a teammate of Mitrione’s when both played for the 2002 New York Giants. “And I think James Harrison, (All-Pro) linebacker for the Pittsburgh Steelers, would also be phenomenal. The reason he would be excellent is … obviously he’s highly aggressive, highly athletic and highly coordinated, but he was also cut five times as an undrafted free agent and he stuck with it. So that shows resiliency, that his ego was in check. He had that mentality, ‘I know I’m better than this guy and I’m going to prove it, whatever stresses it puts me and my family through, this is something I have to accomplish.’ That kind of resiliency is the mark of a champion, an undying competitor. The relentlessness that I see in him is why I think he would be great. Not just an also-ran – he would be great.”

There is a vicarious quality to Mitrione’s assessment of James Harrison. He once walked in the ferocious, hard-hitting linebacker’s shoes. Harken back to mid- October 2006, Week Six of the NFL season. Mitrione got called into a coach’s office and was immediately rocked with a haymaker he didn’t see coming; “We have to cut you.” Failure to perform his duties. No severance pay. No more checks coming in.

The final pro stats for Mitrione, who had been undrafted, were not grand enough to inspire braggadocio. Plagued by foot injuries, Mitrione had played just two seasons, recording just four career tackles along the way. But, like most competitors, he thought he could beat the odds and be the exception. He flirted with the idea of a comeback and waited for a callback that never came. James Harrison’s NFL story featured triumph. Mitrione’s featured fizzle.

“My son was born a week after I was cut,” Mitrione said. “I was 27. I thought, ‘I can’t rely on other people for a paycheck. I need to be responsible and stop chasing The Dream.’ So I went and worked for Corporate America for two years, designing and selling corporate employee benefit packages. I covered the entire state of Wisconsin, minus Milwaukee and Madison. I drove like 3,500 to 4,000 miles a month. I wore a suit and tie. And I was miserable.”

By his own admission, Mitrione underachieved as a football player. This may seem odd given that he was All-State and honorable mention All-American in high school, and second-team All Big Ten at Purdue University with a keen knack for tackling the opposition behind the line of scrimmage for losses. The scouting report on him read like this:

Cons: Way too much of a partier. Too smart for his own good. Undersized.

Reflecting on his football career, he says, “I could have been much, much better. I was always a drinker and I partied pretty hard.”

He started fighting MMA in 2009 after discussions with a buddy, former Philadelphia Phillies outfielder Jayson Werth (now with the Washington Nationals), a fan of the sport and small show promoter. Thus began the professional rebirth of Matt Mitrione, and a determination to not party away his immense talent as he did on the gridiron. Highly regarded for his natural fight instincts and for being a virtual sponge of techniques, Mitrione also packs one-punch knockout power, making him a threat to win any fight, at any time, against any foe.

“I bring leather just about as hard as anybody in the UFC,” he said.

But against Kongo (26-6-2), the experience factor looms large. Kongo has the second-longest tenure in the UFC among heavyweights and will be making his 15th Octagon appearance Saturday night. Only Frank Mir, a UFC vet since 2001, has more fights among heavyweights. Mitrione, meanwhile, has just two years at the pro level and five pro fights.

“Skillwise it’s a big step up,” Mitrione said. “But is it that much of a step up? I don’t know. We’ll find out on Saturday if I get my a-- kicked.”

In Mitrione’s estimation, Kongo’s single greatest attribute makes him the equivalent of a human hornet’s nest.

“He is most dangerous when he is in danger,” Mitrione said, mindful of Kongo’s miraculous comeback knockout win over Pat Barry in June. “That’s the one thing you have to be sharp about. If he (Kongo) gets knocked down he stays active. But I think that I’ve shown in the vast experience of my five fights that if I knock somebody down, I’m patient.”

To beat Kongo, Mitrione said, he cannot afford to be “lazy on my feet. I’ve got to keep my feet moving.”

I ask Mitrione how he sees himself. Does he foremost see himself as a football player who took up MMA or an MMA guy who used to play football?

“I’m in that transition period now,” he said. “Maybe six months ago I was still a football player that was learning how to fight. I feel that now I’m much more of an MMA guy. I know more about my body, diet, cardio, grappling and setups. So I’m becoming an MMA fighter. But I think I’ll always be an athlete that can do this, that or the other. And I don’t know how to classify that.”

Yet MMA has taught the 33-year-old Mitrione that athleticism can only take a man so far in the fight game. In fact, in many cases, he believes that being an elite athlete could be an obstacle.

“Just because you’re a phenomenal athlete doesn’t mean you’re really coordinated -- and you have to be really coordinated to be a good fighter, from what I’ve seen,” Mitrione said. “It sounds silly, but some people can make incredible plays on the field but they can’t walk and chew gum at the same time. It’s strange to see but it’s true. So that’s not necessarily true that because a guy is a great athlete that he’ll be a great fighter. There’s a lot of times that you can be a great athlete … most of the time they are much more athletic and stronger than the average MMA athlete, even top-tier UFC fighters.

“But a lot of times the best fighters are grinders and wrestlers because they’re just more mentally tough than a lot of football players are, and their egos are much more in check. Most of them (athletes who become the best fighters) weren’t allowed to whine or be babied in college, so they were required to be much more accountable than a lot of football and basketball players are. So I think that would be the downfall of a lot of football and basketball players that were trying to be fighters; they’ve been babied so much and their egos have been catered to so often. Whereas a wrestler gets told all the time by coaches, ‘You suck.’ Or they just get the s--- beat of them until they get something right. Now, if a great athlete could keep his ego in check and understand that sooner or later they’re going to get their a—kicked in front of five million people, then I think they would be fine.”