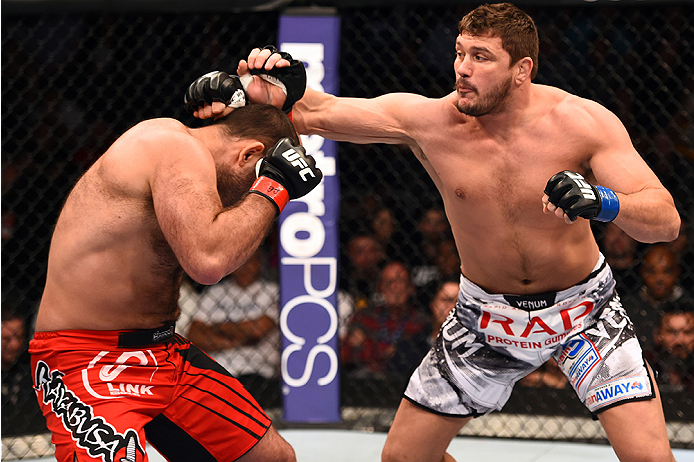 Early in his UFC career, Matt Mitrione traveled the country like a training nomad, making stops in various outposts in order to get different looks and insights from a wide array of coaches and partners.

He spent some time at Duke Roufus’ gym in Milwaukee, hung out in Las Vegas working with Neil Melanson and bounced down to South Florida to work with coach Henri Hooft and the Blackzilians at the Jaco Hybrid Training Center, soaking in knowledge, gaining experience and building up a 6-2 record and a reputation as an entertaining addition to the heavyweight ranks.

“After I lost to Brendan, that’s when I was like, ‘Okay, look – if I’m going to lose, at least I’m going to be home with my babies,’” the proud father of three laughs. “That’s when a couple of my training partners, Eddie Jones (whom Mitrione calls “Butta”) and Chris Lytle, were like, ‘Let’s put some feelers out there’ and then all of a sudden I got four big bodies that we can work with.

“Most of them live in Indianapolis, a couple of them live in Chicago, but I’ve got five bodies where the lightest one is 260 and the heaviest one is just over 300 pounds,” Mitrione says of the group that has been christened Team Two Ton. “They’re all wrestlers and grapplers. The stand-up isn’t Tyrone Spong, Anthony Johnson-level stand-up, but it’s wall work and grappling and heavy bodies that grind on me all the time.”

In the three fights since the heavyweight squad’s formation, the former NFL defensive lineman has rattled off a trio of first-round stoppage wins over Shawn Jordan, Derrick Lewis and Gabriel Gonzaga to climb to No. 12 in the rankings and set up this weekend’s showdown with “Big” Ben Rothwell.

While Mitrione’s natural athleticism and power certainly played a role in the outcome of those three contests, the 36-year-old who has spent his entire career competing inside the UFC Octagon has no doubt that staying home and working with his collection of 260-plus pound training partners has been a major factor in his success as well.

“I’d like to think so,” the 9-3 heavyweight says when asked about a connection between his recent success and the formation of Team Two Ton. “I think a lot of it comes because of the work they’ve been able to put in on me. I’m much more comfortable on the fence, I’m much more comfortable going to the ground and with my shot defense. I feel I can be much more aggressive with my striking. I can be more nimble and more athletic and not have to be too concerned about fighting wrestlers.”

Mitrione’s introduction into the sport and progression up the ranks has been a trial by fire situation since he earned a first-round knockout win over fellow former NFL’er Marcus Jones in his debut. Less than two years into his career, he was sharing the cage with perennial contenders Cheick Kongo and Roy Nelson, suffering the first two setbacks of his career.

In hindsight, the former Purdue University standout admits that he wasn’t prepared for the veteran savvy Kongo brought to the cage, but he’s built off his setbacks, found a situation that works best for him and has everything moving in the right direction once again.

And heading into this weekend’s showdown with Rothwell, Mitrione feels like he’s firing on all cylinders.

“Maybe I jumped the gun a little bit,” he ponders. “I don’t necessarily know if I did or not with Kongo, but I had never fought anybody that didn’t want to fight back or that didn’t want to trade. He used a lot more of his experience and strategy, a lot more cage play and I just didn’t know how to react to it.

“Chris is my mentor, but he’s brutally honest with me,” he says of Lytle, the 10-time UFC bonus winner who retired following a third-round submission win over Dan Hardy in August 2011.  “(After this training camp), he was like, ‘I’ve never seen you look this good. I don’t see anyone in the world beating you if you fight the way you’re practicing.’ That gives me a huge vote of confidence.”

Entering off a first-round knockout win over Alistair Overeem in September and riding a two-fight winning streak, Rothwell is an experienced veteran with an awkward style and tremendous durability for a heavyweight.

Having spent time training together in the past, Mitrione knows what’s in store for him when the Octagon door closes.

“You can tell that Ben is a threat because when he gets to a point where someone is getting off on him standing up, he goes completely spastic, starts doing those weird movements and rushes that guy like, ‘If I’m going to go out, I’m going to go out.’ He makes sure that he capitalizes on that and I think that those awkward movements and his fearlessness about getting put to sleep make him really dangerous.”

That being said, Mitrione has a very straightforward plan for dealing with his awkward, dangerous adversary when Saturday night’s co-main event attraction jumps off.

“I’m going to punch Ben in his face and I’m going to punch him hard,” he says as a point of fact, not a prediction. “He’s going to do the same thing to me, but I feel that if we get to the point where we’re trading off one-for-one or two-for-one, I’ll end up in the better spot. I’m sure that his plan is to get me to the ground or up against the wall, but I feel extremely prepared for that and if he can’t get me to the ground and he can’t keep me on the ground, he’s going to have a rough night.

“And I don’t get paid by the minute, so I’m going to come out there swinging, that’s for sure.”