Matt Mitrione: Ready to Show Up 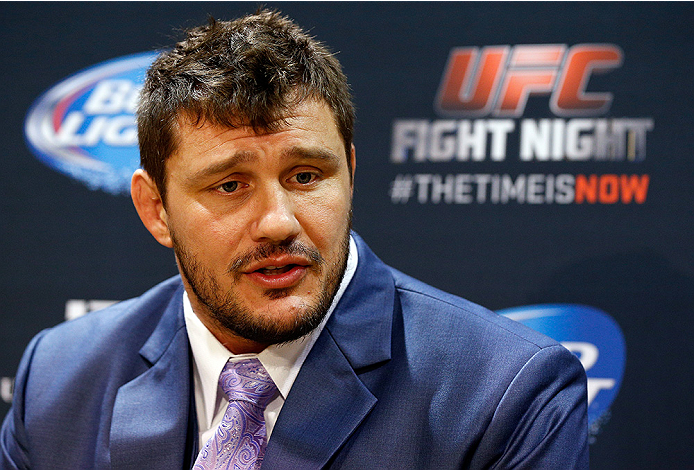 The percent varies, as does attribution, but in short, the quote that says a high percentage of success comes from showing up is one that heavyweight contender Matt Mitrione takes quite seriously. But not for the usual reason.

“I need to start showing up to my biggest fights,” Mitrione, who takes on Gabriel Gonzaga in Phoenix tonight, said. “I can talk about the belt and talk about what I want the end game to be. But more than anything else, I need to show up to big fights and put on the show and display what type of fighter all my teammates see in practice. So the goal for this fight is to show up. After I show up, then we can talk about everything else. Until then, I’m still just another face in the crowd.”

It may be a harsh self-assessment, but the fight game is no joke, and the better you know yourself, the more realistic you can be about your goals. And Mitrione is right – he has the talent and athleticism to do big things in the sport, even at 36. But against one of the heavyweight division’s longest standing contenders in Gonzaga, the Indiana product needs to be the fighter who showed up against Derrick Lewis in September, and not the one who lost to Brendan Schaub in 2013.

And he knows it. In fact, when asked about his 41-second blitz of Lewis in his most recent bout, Mitrione is happy with the result, but he does wish he got to show a little more of what he’s been working on in the gym.

“For the situation, it could not have gone any more perfect,” he said. “But for me, we had a really good game plan going into that one. We really wanted to execute a couple different things and make this a little bit of a spotlight, and we didn’t get a chance. So it was back to the drawing board. But it was good because I spent quite a bit of that camp working on new things and developing some new skills and techniques. And while I didn’t get to use them, it’s cool that I can still leave them in the tool belt. It would have been fun if it lasted a little bit longer, but in that situation, it was about as perfect as it could have been.”

The win was the second in a row for Mitrione, who began 2014 with a Performance of the Night knockout of Shawn Jordan in March. After losses in three of his previous four bouts, it was the fresh start the former NFL lineman needed at precisely the right time, and for him a lot of that “rebirth” had to do with taking his training camps back home to Indianapolis.

“I’m not brand new, I’m not reinvented, I’m still the same old me,” he said. “I just feel like I’ve gotten better. I’ve traveled around the world, I’ve done everything there is to do, and I found that I can actually come back home and get the work that I need on a daily, consistent basis here in Indianapolis and at Purdue. I put my kids to bed every night and I get beat up every single day by incredible talents that nobody knows about yet.”

He calls his training collective Team Two Ton, and being at home allows him to spend time with his wife and children while still getting in the work necessary to compete at the UFC level. To come to this conclusion as a top 15 heavyweight with a title run left in him is a good thing that many don’t get to experience until it’s too late to compete at the elite level. Then again, Mitrione has had plenty of time to go through the trial and error process.

“For the most part, I’ve been a professional athlete since I was 22 years old,” he said. “I’m 36. So I’ve been doing things for a long time, I’ve been involved in the game a long time, and I think I understand that. Plus, you can only chase it down for so long and then you realize that you done did it. I got it.”

Now it’s time to put it on Gonzaga, a fighter who has been fighting the best for a long time in the UFC. But he has been erratic.

“Gonzaga’s funny because he is the most underrated ranked heavyweight we have in the game, and the reason why he is is because he’s kind of Jekyll and Hyde,” Mitrione said. “You don’t know what Gonzaga’s gonna show up at times. There’s the world beater that shows up and is a dominant, physical, aggressive force who’s one of the best in the world. And then there’s a different Gonzaga that shows up at different times. You never know which one is gonna show up.”

You could say the same thing about Mitrione, but he wouldn’t necessarily agree.

“As opposed to saying that, I would think I would say that I had genuine inexperience on a lot of different levels,” he said. “The one fight that I pissed the bed in was Brendan (Schaub). I genuinely let myself, my coaches and my supporters down in that fight. And I think all of the other ones, like with Roy (Nelson) and with Cheick (Kongo), I think that was inexperience. But all three of those losses were great learning experiences. It sucks that they happened in my most high-profile fights, but I guess sometimes that thing has to happen to you in order to grow.”

Growing time is over. Tonight, Matt Mitrione has to show up.

“Team Two Ton is very objective,” he said. “They’re all very honest with me and they tell me things I do and do not want to hear all the time. They tell me that they feel I’ve got the ability to make a run for the belt. I feel I do as well. I feel right now, at this moment, that I’m one of the best in the world, and I will show it on Saturday.”