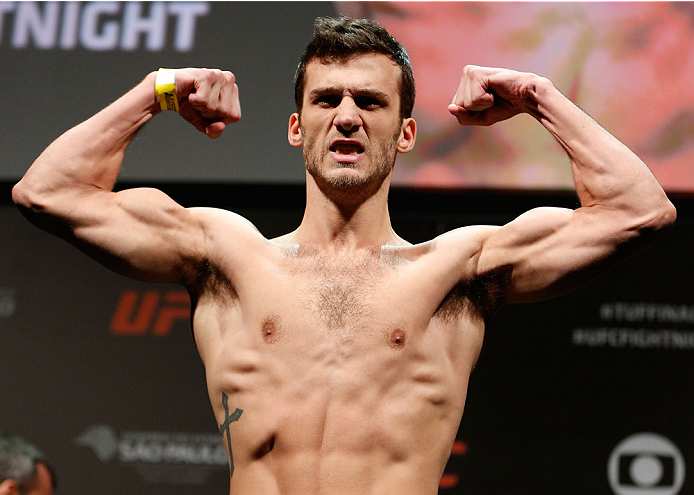 Matt “The Crowbar” Hobar has held several titles over the course of his athletic career, but none are more valuable to him than the ones he earned as a wrestler.

“That was one of the greatest things to ever happen to me in my life, all those accomplishments I had in wrestling,” the former Legacy FC bantamweight champion says.

Hobar placed all four of his high school years in the Texas state wrestling championships, taking first his junior and senior year, but while so many others in his position would go on to wrestle on a college scholarship, Hobar had had enough of the sport he started the same year he entered kindergarten.

“I started wrestling when I was five years old,” he said. “I began Judo at seven and reached purple belt and I was going to go on and wrestle in college but got too burned out, and I didn’t work out at all. My first two years of college I did nothing and lost direction as to where I wanted to be athletically. I picked up jiu-jitsu and when I was 22 I had my first amateur (MMA) fight.”

A broken neck and a serious elbow injury later, Hobar persevered and now finds himself at the age of 27, fighting for the second time in the world’s premier MMA promotion. He faces Aaron Phillips on August 23 at the BOK Center in Tulsa, Oklahoma.

“Aaron and I have similar body types,” says Hobar. “We are both long, lean guys so I won’t be able to rely on my reach as much as I have in other fights. I’ve been working more on my striking and my defense. Aaron is a striker. He’s got a lot of experience on the feet, being a Muay Thai and taekwondo guy, so I am ready for the striking game this time around.”

Hobar has relied on his wrestling his entire MMA career. However, after losing by way of knockout in his UFC debut earlier this year against Pedro Munhoz, the ground and pound specialist learned that the days of being one-dimensional in the sport are long gone.

“Pedro Munoz is a really well-rounded fighter,” said Hobar. “When I looked at his fight video I guess I didn’t see it there, but when I got in the cage he was landing on me more than I thought he would, and his footwork was better than I thought it would be. Couple that with being in his hometown in Brazil, there were just so many factors that messed with my head a little bit, and I think that was a factor in my performance that night. I was really disappointed by the way things went, and I came back and really started working on my stand-up.”

This time around, Hobar will be in more familiar territory in Tulsa, Oklahoma, where he won the Tulsa Nationals wrestling tournament at the age of six. He says that although he didn’t pick up jiu-jitsu and striking until later, the time he spent on the mat has helped him keep up in the cage.

“I feel like so many people now are starting at such a young age,” he said. “We’ve got this new breed of guys in MMA who started striking and grappling in their teens and they’re a new breed of athlete. I don’t think I’m at a disadvantage because I started wrestling so young and I have so much mat time, but there is a difference between the guys who start younger and the guys who don’t.”

Still, while Hobar is only making his second appearance in the world famous Octagon, he feels the pressure of being a UFC fighter.

“I feel a sense of urgency for getting a win this time,” he said. “The UFC doesn’t like to have 0-2 guys around, so I’m working hard to get the W. I feel like if you’re a UFC fighter you have to perform at your best because everyone in the UFC is one out of six hundred of the best fighters in the world, and you only have a couple fights where you can make your mark. The trouble is, you could be fighting a world champion Muay Thai fighter who coaches Muay Thai and also happens to be a black belt in jiu-jitsu. So it’s necessary to be well-rounded. I have to be proficient in all areas.”