Matt Hamill - From Competitor to Fighter

"When I faced Tito (Ortiz), I got a killer instinct. I was going to do my job and my job is to win the fight." - Matt Hamill 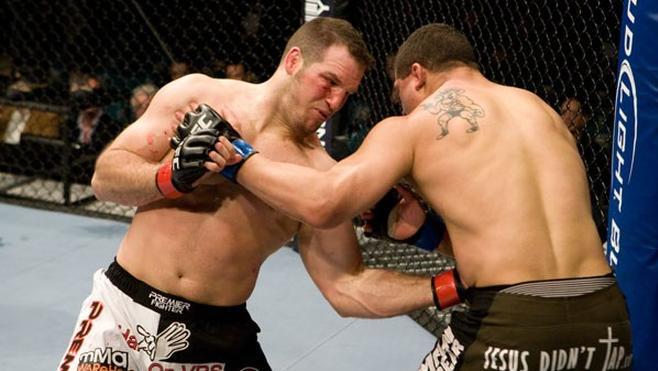 Duff Holmes has always been one of Matt Hamill’s staunchest defenders, and seeing the two together over the years, you get the impression that Holmes would gladly take on that role even if he wasn’t the manager and trainer of the UFC light heavyweight standout.

But Hamill was taken aback when Holmes told him that his three round win over Keith Jardine in June of 2010 was when he turned into a fighter. “The Hammer” fired back like you would expect him to, but then Holmes explained.

“Previous to that, I used to say he was a competitor. I’d say that he’d go into the Octagon and compete rather than fight.”

The bloody 15 minute war with “The Dean of Mean” changed that.

“Right after he got poked in the eye, he turned it into a fight and he fought,” said Holmes. “He’s been a fighter ever since.”

Hamill, obviously choosing to agree to disagree with his longtime friend, leaves it at, “To have a three round war with Jardine after the Jon Jones fight was very important.”

The December 2009 bout with the soon to be crowned UFC light heavyweight champion is the one fight Hamill probably wishes he could get back. His split decision defeat against Michael Bisping in 2007 was one of the most controversial in recent history and his only other loss, to Rich Franklin in 2008 came courtesy of a liver kick that probably would have ended any fighter’s night. But his disqualification win over Jones (rendered as such because of an illegal downward elbow) is the haunting one. Admirably, he doesn’t count it as a win in his mind.

“I made a lot of mistakes against Jon Jones and I know he won that fight, no question,” said Hamill. But despite all the positive notices he had built up over the years, the Jones fight smashed a lot of them, leaving him to rebuild – not just the shoulder he injured in the fight – but his reputation.

So how do fighters do that? They fight. And Hamill fought against Jardine, keeping the fight standing much of the way as he and his foe slugged it out. The win was a sweet step on the road to redemption, but there was just one more order of business to take care of, and that was to defeat his coach on The Ultimate Fighter, season three, Tito Ortiz.

Hamill had been in a similar position before against Franklin, and the Ohio native admitted that it was difficult to pull the trigger against his friend. It could have been the same deal the second time around, until some of Ortiz’ pre-fight banter hit a little too close to home for the proud representative of the deaf community.

“I learned my lesson when I lost to Rich Franklin,” said Hamill. “Rich and I were real close. We grew up together in Cincinnati, Ohio, and we were family friends. But facing Tito, I had learned my lesson and I didn’t want it to happen again. In addition, when Tito said something about the deaf community, that we have soft heads and all that stuff, any fighter can make fun of me anytime they want, it just won’t affect me. I’m used to it from when I was a boy, so the words don’t affect me. But the deaf community didn’t understand; they all accepted Tito after the show and said ‘wow, he’s a great coach.’ So when I faced Tito, I got a killer instinct. I was going to do my job and my job is to win the fight. I didn’t want it to happen again like against Rich Franklin.”

Hamill fought a complete fight against the former UFC light heavyweight champion, winning a clear-cut unanimous decision. He had closed the chapter on the first stage of his UFC career by beating his former mentor. Now he wanted to establish himself as a contender.

So he called for Quinton “Rampage” Jackson.

“I felt Rampage was a good opponent for me stylistically and he’s such a big name and a star in the sport that I felt it would really do a lot for my career,” said Hamill, who got his wish in a fight that will head up Saturday’s UFC 130 card in Las Vegas. Jackson wasn’t pleased with the pairing when it was first announced. Hamill hasn’t let it bother him though.

“I’m absolutely not insulted by it and I don’t blame Rampage,” he said. “He’s been fighting the top guys in the division this whole time, and I know he wanted to fight Rashad (Evans). He’s ranked third or fourth in the world, so I don’t blame him, but I thank Rampage for giving me the opportunity and I’m going to make the most of it.”

Hamill’s confidence has been evident in the weeks leading up to the bout, but he’s not brash about it. Instead, he just goes about his business with the knowledge that should he win, his life is about to change.

“I’m starting to climb the ladder,” he said. “But I’m getting better. I’m more of a well-rounded mixed martial artist now and every day I learn something new. I’m ready to go to that next level of competition.”

At 34, he’s likely in his physical prime, making it even more important for him to strike while the iron is hot. He’s not feeling the pressure though, even with the increased media attention that goes along with being a main event fighter on a UFC Pay-Per-View.

“He’s dealing great with it,” said Holmes. “This is just what he does; it’s not like his whole existence. So all the interviews and all the media and fame that comes along with it, he could care less about any of that.”

Holmes is also a great deflector and protector, making sure his charge stays focused on the task at hand without getting too distracted by the extra cameras and interviews. That close bond extends to the entire team, which has retained its core over the years, a rarity in combat sports.

“I think it’s very important for every fighter to have guys around him that he can trust,” said the manager / trainer. “They’re not there for their own reasons, they’re not ‘Yes’ men, and they want the best out of you. And for Matt, it’s even more important because he relies on the communication here, and he’s basically taught us how to communicate with him.”

In the Octagon though, Hamill will be on his own when he takes on Jackson. There, it’s just two men fighting to win and move forward in a crowded weight class. That’s just fine with “The Hammer,” who has even more motivation than usual after his longtime wrestling coach Doug Blubaugh died in a motorcycle accident earlier this month.

So in honor of his coach, he’s picturing the Jackson bout as the next step in a long tournament in which he’s nearing the finals. It’s home stretch time, and he couldn’t be more ready.

“I’m taking it one fight at a time and not looking past Rampage, but I feel like this is my time, and being a wrestling guy, I look at it like I’m in the semifinals of a wrestling bracket,” he said.