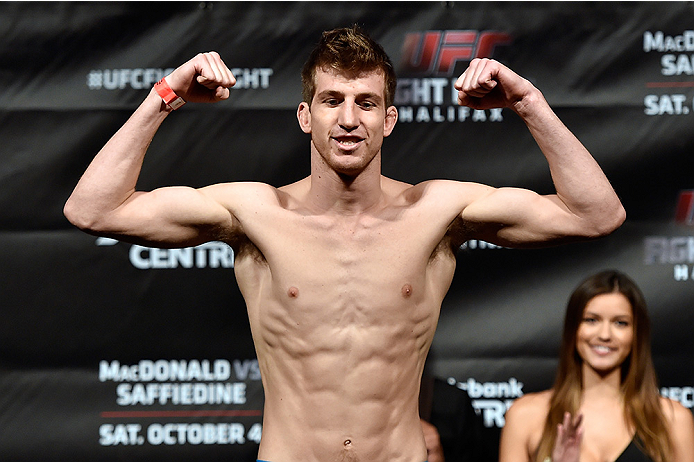 The possibility of redemption can be an incredible motivator.

When hard work, passion and sacrifice are invested in an effort to succeed and that goal is not met, the longing to make things right is an itch that is difficult to fade. 25-year-old Canadian prospect Matt Dwyer has felt that particular sting for several months now, and it’s been the driving force behind every training session since an unfortunate night in Halifax.

After a successful run on Canada’s west coast circuit, Dwyer was selected to make his official Octagon debut at Fight Night: MacDonald vs. Saffiedine in Nova Scotia. Getting the opportunity to compete in the UFC is the dream of every young fighter, and luckily for Dwyer, his moment to shine was going to come on native soil. All the sweat equity invested and mental perseverance was going to be validated at the expense of Albert Tumenov, but that didn’t turn out to be the case.

The British Columbia native would stumble in his first effort out of the gates and was forced to exit the Octagon feeling he was unable to show his talents. Yet, rather than sulk and wallow in what could have been or an opportunity lost, Dwyer hit the gym with force, determined to show and prove in his next outing.

Even at his young age, Dwyer was savvy enough to respect the constant education the fight game presents and came to embrace the importance of constant evolution as a competitor. Wins and losses aside, continued progression and growth are what yields success and longevity in the “Hurt Business,” and Dwyer’s goals are far from being short term.

“I’ve had a tough loss before and I’ve always come back better,” Dwyer said. “Even though my last fight wasn’t that long of a fight I still learned a lot in the way I carried myself in the lead-up to the fight. I know what to expect now. With that being my first time in the UFC, my head was up in the clouds. I didn’t really know what to expect when I got to the venue. But now I believe I’m far more prepared for fighting on the big stage.”

The Toshido MMA representative is looking to have a lengthy run at the highest level of the sport, but knows he needs to notch his first victory inside the Octagon to gain traction in that regard. He’ll have his next opportunity to so on Sunday night when he faces William Macario at UFC Fight Night: Bigfoot vs. Mir in Porto Alegre, Brazil.

In addition to squaring off with a tough customer in “Patolino,” the fight will also be Dwyer’s first time exiting the Great White North. He will be leaving the laid-back comforts of Canada’s sleepy west coast province, and jumping directly into the hectic environment that Brazilian fans are notorious for. Nevertheless, it’s a scenario he’s very much looking forward to.

“I’ve never been outside of Canada before so it should be interesting,” Dwyer said. “As long as I survive the flight and the Brazilian summer I’ll be fine. I’m really excited. I didn’t get to do much in my last fight and I really want to get in there and throw down in this one. I want to show everyone what I can do and I’m going to make this a good one.

“It’s a different world down there and it’s halfway across the world from where I’m coming from. I just want to have a good performance and I want to make this a battle. In my previous fights I’ve learned that I tend to get better the longer the fight goes and that’s when things really start to flow for me.”

In Dwyer’s mind, with the chips stacked up against him, a victory over Macario in Brazil will only provide further proof that he belongs in the UFC. If he has to go to another hemisphere and beat down a local favorite to put a stamp on his cause, then so be it.

Simply put, Dwyer is hungry to scrap and believes his opponent on Sunday night will provide the perfect opportunity for him to make a loud statement on his quest for redemption.

“I’m going to have the height advantage, but [Macario] has pretty long arms for a guy his height,” Dwyer said. “I think it’s going to a great fight from a stylistic standpoint. We both like to get in there and scrap it out, and he’s a guy who likes to press forward, trying to throw heavy shots. I’ll be looking to counter and set up my own combinations. We both bring it in there and I’m expecting a great fight. I didn’t get a chance to prove what I can do in my first fight and I’m looking to really show my skills down in Brazil.

“Life is about adventures and chasing your dreams and goals. It’s all about growth and I’m ready to go out there and be an assassin. It’s business and I’m there to do a job. And I’m going to conduct myself that way, but I’m really looking to go out there and put on an impressive performance. I want to impress everybody and anyone who is watching and show that I belong in the UFC.”