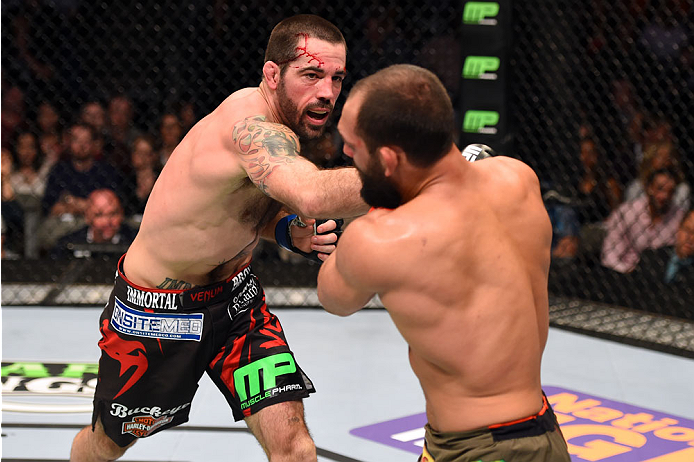 It wasn’t too long ago that Matt Brown would look at the inevitable bad days in the gym and take them personally. He didn’t subscribe to the old adage that the more you sweat, the less you bleed; instead, it was a time where he got angry and questioned whether he was as the world saw him, as one of the best welterweights in the world.

“There’s times when the sport itself is not enjoyable,” he laughs. “And part of where I was at for a little while was if I walked out of there losing, I would get angry with myself or frustrated with what I did in the gym that day. I would think ‘man, I should be beating these guys’ asses,’ instead of looking at it objectively and seeing that this is just part of the process.”

Sparring and gym work isn’t about winning though; it’s about getting better. Brown didn’t see it that way, and while he was leaving the gym angry at times, everywhere else, he was starting to enjoy the life of a UFC contender on a seven-fight winning streak. The Ohio native had come a long way from nearly getting cut after three consecutive losses in 2010, and the focus on him personally had shifted from the “comeback story for the ages” to “Matt Brown is on his way to challenge for a world title.”

“A lot of people are looking at me differently,” Brown said. “The lens that people look at me through has changed over time from the original story of getting on The Ultimate Fighter. Then I was just an Ultimate Fighter guy who could have been like how many others that just lost a fight and dropped off. And it’s just evolved over time. I lost three in a row, came back and won a bunch in a row, but honestly, all of that is pretty irrelevant to me. I can’t allow that to affect my daily life and what I do as a fighter. I know who I am, and I know what I’m capable of, and I have to allow that to be my guide. I can’t let other people’s opinions change my own opinion.”

Especially when other opinions wondered where “The Immortal” was heading after his winning streak ended last July. First, Brown missed weight and went on to lose a five-round decision to Robbie Lawler, and eight months later he dropped a second straight bout against Johny Hendricks. No one can scoff at losses to the last two men to own the UFC welterweight title, but Brown knew something had to change.

“I think a little bit of my downfall in my past two losses is that I might have gotten a little ahead of myself,” he said. “Maybe it was a little too much of enjoying the spotlight, enjoying where I was at, and maybe I took for granted the situation I was in a little bit. There are probably a million other factors also. Since then, I looked back on what happened in my last two fights, I reflected on it, and I’ve rededicated myself to the sport, and I think that the last two losses humbled me a little bit, especially the last one with Hendricks. I think there were a lot of guys out there doing more than what I was doing. And what got me to where I was at was doing more than what everybody else was doing.”

That’s not to say the always intense Brown was taking his foot off the gas; it’s just that he was driving in the wrong direction.

“It’s a lot of looking at the end product rather than focusing on the process, and I think I’ve gotten back to that, and hopefully it shows through in this next fight,” he said. “You have to find a way to make it enjoyable, and part of what I’ve done, in a sense, to do that, is trying to go back to being a white belt again, go back to being a kid that walked into the gym and wants to do this for fun. And that’s the mentality I’m bringing to the gym now. It reinvigorated the entire training process.”

This Saturday, the new / old Matt Brown returns to face Tim Means in a battle of no nonsense welterweights always willing to throw down. After losing the wrestling exchanges throughout his bout with Hendricks in March, the idea of facing a like-minded slugger in “The Dirty Bird” is likely music to Brown’s ears, simply because he can just go in there and fight.

“I realized how short this really is in your lifetime, and I need to take full advantage of it and I can’t let it pass me by because of idiotic thoughts (Laughs) or getting ahead of myself,” he said.

As for those bad days in the gym, he’s got that under control too.

“I train with tough guys and I get beat up a lot, so there are many days when I walk out of the gym with my tail tucked,” he said. “But that was part of rededicating myself to the sport and learning to embrace those challenges again.”

Brown had been through plenty of changes throughout his life and his career, and he’s always found a way to make things work after hitting a wall. This resilience is what made him a fan favorite, and it will also be a shining example to his sons Connor and Hunter of what perseverance and being willing to change your direction can do. Not that Brown is about to start preaching about his parenting skills. That’s not his style.

“I don’t look at it so much as I’m doing it for them or even necessarily to teach them,” he said. “I look at it more as an inspiration for them. I want them to see the sacrifices that I make. I don’t go out on Saturday nights when everybody else is out and having fun. I’m not eating pizza when everybody’s over watching the UFC. There are these constant little things that they see over and over, and that’s the ultimate lesson that I’m trying to pass on to the children. It’s easy to sit there and tell them to do these things, but when they see it, it’s obviously a completely different world. You can teach by example far better than you can teach by vocalizing. And this is a selfish sport, but it depends on what you consider to be selfish. What a lot of people call selfishness is what other people call singular focus.”