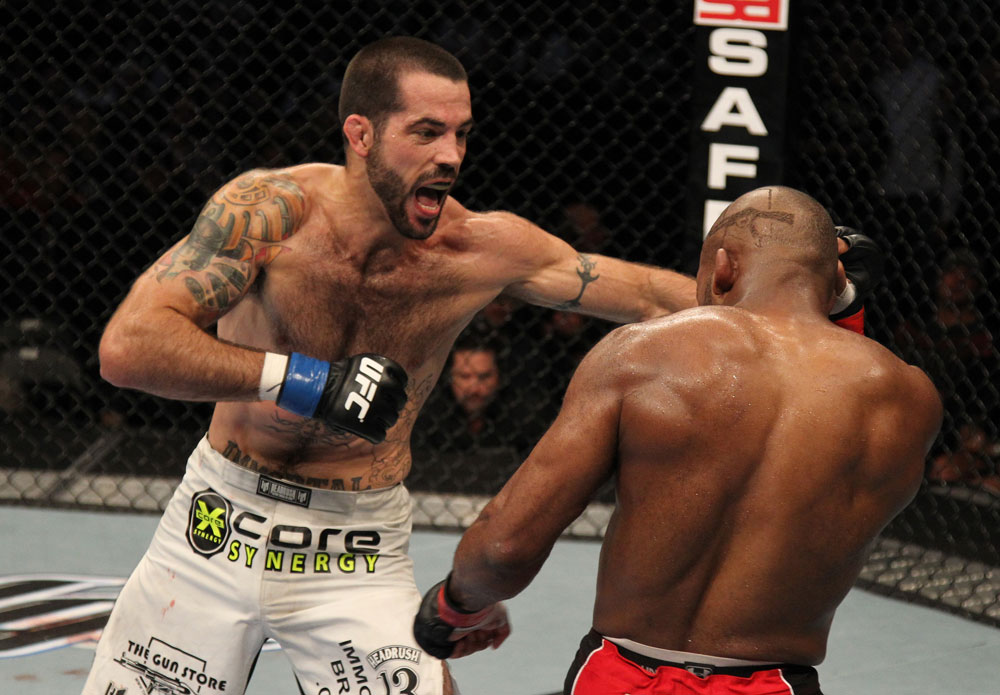 The day Matt Brown nearly died was the beginning of an awakening.

Well before he competed in the UFC, Brown had nothing to his name except a backpack full of clothes. He was living with friends on a salary no higher than $20,000 a year. And there were the drugs and the drinking. One of those drugs was heroin, an overdose of which nearly sent Brown spiraling down to the point of no return.

Once Brown survived, his friends called him “Immortal.” That’s when Brown, a former bodybuilder and boxer, started his revival. He began his MMA education, and as money began falling short, Brown auditioned for and made the cut for Season 7 of The Ultimate Fighter to train under Forrest Griffin. He knocked out a fighter named Jeremy May after he was mocked for his 6-foot-0 stature and made it to the quarterfinals, where he was stopped by eventual winner Amir Sadollah.

Brown’s MMA career isn’t how he scripted it. He’s 14-10 (5-4 UFC) entering his UFC 139 showdown against another TUF alum, Seth Baczynski. Entering his last fight against John Howard, Brown was a loser of three straight and one more would have slammed his UFC career shut.

In the big picture, it doesn’t matter. Ask Brown about his state of mind and he’ll tell you with passion that life is good, that he can lose 10 in a row and life is still out there for the taking. Don’t be fooled. Brown plays to win – and plays hard. He just does it embracing the oldest of clichés, the one that suggests you can do anything if you put your mind to it. The world “Immortal” is inked on his stomach as a daily reminder to be determined while living a life of peace, which in his case was nearly snuffed out before it blossomed.

“All those old clichés, they’re [bleeping] true,” Brown said. “All that stuff really strikes me now. It makes me content with life no matter what happens. When you have peace in your life it shows in your performances. It showed in my life performance, but now I can fight not so much with emotion.

“A lot of times your emotions make you do stupid things, so rather than feeding off those emotions, now I can focus on performing, sticking to my game plan, doing what I do, playing to my strong points, playing to my opponent’s weakness, being intelligent instead of going crazy like I’m just going to [bleeping] kill you. It’s all negative pressure.”

Negative pressure and baggage is what Brown dropped like a backpack full of rocks with his three round unanimous decision win over Howard at UFC Live in June. Even the road to Baczynski and San Jose was paved with gravel. His original opponent in June was Rich Attonito before an injury to Martin Kampmann forced Brown to switch and prepare for Howard. Originally, Brown was slated to compete against John Hathaway November 5 at UFC 138 as an injury replacement for Pascal Krauss. Then Hathaway pulled out with an injury.

Brown was not only out of a fight, he was yanked from the event, bumped forward two weeks and a date with Baczynski (14-6 MMA, 1-1 UFC) at UFC 139. That gave Brown a shade over a month to prepare for a tough Hawaiian owning a four-inch height advantage and one motivated to never receive a pink slip signed by Zuffa again.

“I’m focusing on improving myself in all aspects of the game and my life all around, really, and being 100 percent prepared,” Brown said. “I want to be ready for everything that comes my way. I expect Seth, especially coming off a win and with this opportunity with the UFC, he really wants to prove a point that he belongs here.”

Both fighters face a proving ground. Baczynski was terminated by the UFC after his Ultimate Finale 11 loss to Brad Tavares, but returned 15 months later to submit Clay Harvison and improve to 4-1 over his past five fights. Brown too needs this fight, badly, but he’s in a place he’s often refers to as a “sense of calmness.” He relocated back to his native Ohio, after spending time at Matt Hume’s Seattle-based AMC Kickboxing and Pankration, for grueling camps at three gyms in Columbus. Even under the pressure of win or go home, Brown enjoyed feelings of tranquility throughout a journey that culminated by grinding his way through his last fight. Even when Howard mounted an offensive with leg kicks, the last sense Brown felt was one iota of danger.

“I didn’t feel those leg kicks,” Brown said. “I’ve trained with the top Muay Thai fighters in the country. With their shin pads on it hurts way worse than any one of his ever hurt.”

A loss to Baczynski may hurt enough to where Brown is looking for work, but unlike the days where he barely made ends meet, his endgame will justify the means. His dream to fight in the UFC has been supplanted by visions of being crowned a champion. Getting released will hurt, but Brown could also look back to say he’s lived the dream, doing something.

“That’s something personally I can be very happy living with for the rest of my life,” Brown said. “I’m doing something 99.9 percent of the people in the world never get to do.”

Not that Brown is satisfied, mind you. Not even close

“You’re never going to have a fight that’s, ‘Well I can lose this one and I’ll be fine,’” Brown said. “If I was ever to get to that point, then I think that’s when you need to start looking at retirement or looking at other careers. It’s that whole competitive edge within yourself. You stop dreaming, then you stop having hope. You stop having goals, you might as well be dead at that point. Every fight you’re going to have a million reasons why this is the biggest fight ever. Me personally, I don’t even think about that. If you’re not playing to win, why are you playing?”

Brown’s fighting career could be done in an instant, or he can score big over Baczynski and make his move at welterweight two months before his 31st birthday. His eyes are fixated squarely on that prize, but whatever happens, he’s realized a sense of self worth that’s not based on winning or losing. Deep inside, at home or in combat, exists tranquility though tension. Brown cheated death and remains in the UFC. Fleeting as a fighter’s career can be, Brown has made his mark as a survivor by knocking the demons out of his life.